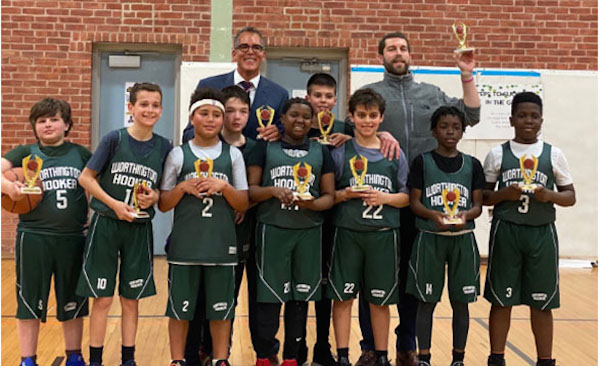 I write as a (white) father, citizen, and volunteer basketball coach of fifth- and sixth-grade boys.  They are the age of Tamir Rice, the Cleveland 12-year-old shot dead in 2014 on a playground by a police officer responding to a report of a “probably fake”  — indeed toy — gun.  The 911 dispatcher shared responsibility for not fully relaying the call’s details.

The Long Civil Rights Movement has chapters still to be written.  Not just matters of race but the rights of immigrants, the indigenous, women, LGBTQ, and persons with disabilities have only partially advanced.

In affecting as well as reflecting culture and politics, sports can be a constructive force.  Think Jackie Robinson, Muhammad Ali, Arthur Ashe, Billie Jean King, Bill Russell, Kareem Abdul-Jabbar, Colin Kaepernick.  The Positive Coaching Alliance aims to harness this potential, from sportsmanship and teamwork to gender and racial relations.  No More Names is among the groups of athletes fighting racism.  NBA, UConn, Yale, and NFL players (like Larry Fitzgerald and Emmanuel Acho), for example, provide leadership.

Before the pandemic erupted with its own disproportionate effects, our youth basketball team celebrated a division title.  A picture shows players of all skin tones, trophies in hand.

All nine boys are equally innocent.  But even decades after Emmett Till and Birmingham’s “four little girls” were murdered, these boys face adolescence with different pressures, risks.  The freedom to go for a run may be limited.  The older brother of one boy can’t earn pocket money mowing lawns; his parents fear he’ll be suspected of stealing the mower and reported to the police.

Another boy I coached, now in a suburban middle school, is according to his mother “one of two black boys in his grade.”  A classmate this year called him a “black negro.”  A friend who’s African American finds a measure of comfort in his preschooler’s still being unaware of the world’s cruelties, before noting that his young son will, alas, eventually need “the talk” about how to interact with police.

Rev. Martin Luther King Jr.’s dream, that children be judged not by the color of their skin but by the content of their character, remains unfulfilled.

Movements are composed of people.  My father was at the March on Washington, August 28, 1963.  He is Richard D. Brown, now a historian—then a 23-year-old graduate student and Boston CORE volunteer among the crowd at the Lincoln Memorial.  He recalls the inspiration of John Lewis’s and Dr. King’s speeches and how, two years later, after the Selma “bloody Sunday” march he watched on TV, the White House was mobilized.

The moral power and searing images of Selma pushed President Lyndon Johnson finally to support the Voting Rights Act (a year after he had been pushed to work toward the Civil Rights Act).  In March 1965, Johnson adopted the spiritual language of the movement, concluding, “We shall overcome.”  That was a key moment, even if his Great Society ambitions were eclipsed by Vietnam, the drug war, and failure to heed the Kerner Commission after the 1967 uprisings: “From every American [real progress] will require new attitudes, new understanding, and, above all, new will.”

Not enough has changed, yet

At the March on Washington 57 years ago, now Congressman John Lewis said:

We are tired of being beaten by policemen … of seeing our people locked up…. We want our freedom…. If we do not get meaningful legislation … the time will come when we will not confine our marching to Washington.  We will march through the South … with the spirit of love and with the spirit of dignity that we have shown here today.  By the force of our demands, our determination, and our numbers, we shall splinter the segregated South into a thousand pieces and put them together in the image of God and democracy.  We must say: ‘Wake up America!’

That day in 1963, the participants would have been dismayed to know that their grandchildren would, in 2020, face systems of policing, prejudice, and politics that continue to treat people of color so differently from white folks.  We can’t let another generation encounter such injustices.

Our parents marched on Washington; we —and our children— must march on.  Wake up, America!  Act.  Speak.  Vote.

Josiah H. Brown is a volunteer youth basketball coach and a former president of Domestic Violence Services of Greater New Haven; professionally, he is executive director of another nonprofit. He lives in New Haven with his wife and their son and daughter. Earlier articles addressed topics ranging from Indian Americans, immigration, refugees, nationalism, and the “Muslim ban” in historical context, to new voters, citizenship, men’s role in defending reproductive choice, men and the campus climate for women, college sports, history and public lands, Gandhi’s legacy, marching in peaceful protest, U.S. politics of the last two decades, historical facts versus mythology and fakery, the Loving v. Virginia legacy, and the Obama generation. Twitter: @JosiahBrownCT Medium: @Jhenryb92

Facebook35TweetPinEmail1Shares36
wpDiscuz
0
0
Would love your thoughts, please comment.x
()
x
| Reply
Share this ArticleLike this article? Email it to a friend!
Email sent!