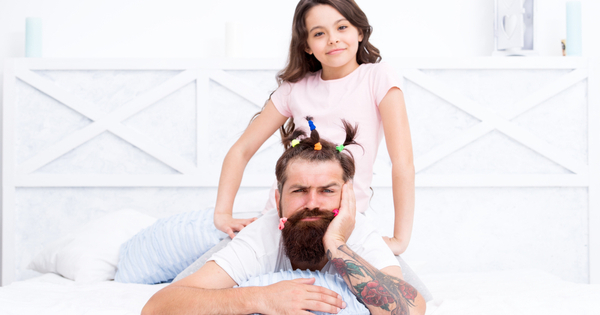 In these dark times, we need as much hope as we can muster. So, if you are a dad stuck at home with your young kids and are about to pull your hair out (or maybe theirs), below is a dollop of hope for you.

You see, I’ve been ‘stuck’ at home for the past sixteen years with bringing up my three kids. Well, ‘stuck’ is maybe a bit too stark. Perhaps ‘stay-at-home dad’ is a more apt phrase, although even that has its quirks: along with all the usual parental chores, I teach a few classes of film at a local university, do freelance film work and have made three feature-length films in that time.

When my first son was born in 2003, community and support were scarce for stay-at-home dads; and so, while I was elated to be getting to know my child, I also experienced the pangs of feeling ‘emasculated’ and isolated while most of the other dads I knew were off to work on a daily basis.

The disconnect between the joy I was feeling at being with my kids and these societal pangs prompted me to make my first feature-length documentary, The Evolution of Dad, which was completed in 2010. The film is still used to this day as a teaching tool in hundreds of colleges and universities across the globe as a thermometer for the challenges fatherhood faces in the 21st century. Making the film helped validate my role as an involved dad, and an invitation to the Obama White House in 2014 to play the film at the Working Dads Summit was one of the most meaningful moments in my life.

I chose the word ‘Evolution’ as opposed to ‘Revolution’ because I perceived that dads were awakening to the value of being around their kids more, but societal progress was still slow. In other words, while tools like telecommuting were becoming more prevalent, finding more work/family balance was not going to happen in a radical and immediate way. How could it? The corporate powers that be still discourage dads from prioritizing their kids too much, and the United States remains the last industrialized nation without paid parental leave for either parent.

One of the things I discovered while researching fatherhood was that, prior to the industrial revolution, family members worked together mainly on farms, where the next neighbor was often a mile or so up the road—and so family members of that era had to depend on one another to thrive and survive.

Cut to the present when a virus has forced all of us to hunker down in our homes—a time when school and summer camp seems less and less likely to be happening with each passing day. Suddenly, dads in massive numbers have been forcibly yanked from the ordinary routine that may include late hours at the office, business trips and perhaps drinks with clients.

In other words, we now face a time that is suddenly slow— when we are surrounded by our family and our family alone— strangely echoing pre-industrial America.

If you are a working dad who is now telecommuting, I know how difficult a transition this is for you. Homeschooling, 24/7 care of your kids is not something most working dads are used to. If your home isn’t big, the threat of the coronavirus may seem minor compared to all of the noisy, messy needs of your kids and their relentless quest to squeeze every last ounce of your attention.

This is going to take some getting used to, just as it did for me and all the other at-home parents out there. But here’s the thing: if you are open to the deep value of this moment, you are going to find that being around your kids in such an intense way is transformative—for both you and them. If you are able to embrace this slow moment, you will discover something deep within yourself that you may not have known existed: the true and utter delight at being with your kids and having a front-row seat to witnessing them grow on a minute to minute, daily basis.

At some point, this pandemic is going to end and everyone will emerge from this cocoon of solace to return to work as before. I look forward to this moment just as much as you do; but my hope is that this current experience will transform you just as it did for me years earlier. Maybe you will be more open to the idea of telecommuting. Maybe you will demand more work/family balance. Maybe paid parental leave will become more of a priority for you.

Then maybe, just maybe, this journey of the American father will finally move from an evolution to a revolution.

That’s my hope for you, your kids and our nation.

Dana H. Glazer is a filmmaker and at-home dad living in Northern New Jersey with his wife and three children. To view The Evolution of Dad please visit: https://vimeo.com/ondemand/evolutionofdad