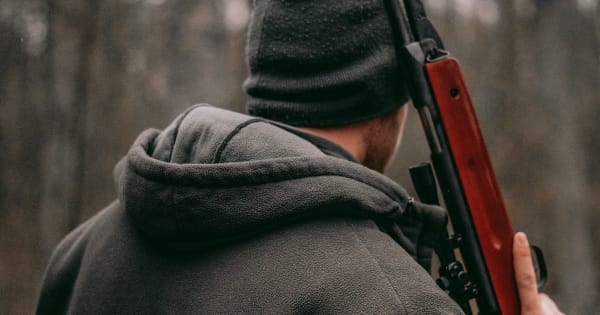 In the 2005 movie “Syriana,” a Pakistani migrant worker named Wasim is on the verge of getting deported when he loses his job at an oil refinery. As his story unfolds, he gets seduced by an Islamic extremist, who ultimately convinces him to execute a suicide attack on the company that laid him off.

Normally, suicide bombers and other terrorists are shown on screen as wide-eyed lunatics far beyond reason, insane time bombs. Because, goes the thinking, who but the insane would commit such heinous acts?

“Syriana,” though, shows Wasim’s actions as reasoned: He is desperate, but he is sane. He’s been pushed to the brink by cold, unfeeling capitalism. Even if we don’t ultimately side with Wasim’s actions, we can understand them as the logical endpoint for Wasim himself.

It’s a variation of a trope that fills our film and literature: A man (almost always a man) whose act of extreme violence is justified by a system stacked against him. For every mentally unstable Travis Bickle (“Taxi Driver”), there are a dozen rational men who are broken (William Foster, “Falling Down”), desperate (Johnny Smith, “The Dead Zone”), or fighting back (John Rambo, “First Blood”).

This is the message we give our men, over and over: Violence is justified as a final solution.

On August 3, 2019, a scene that’s becoming all too common in the United States played out twice.

In El Paso, Texas, a white man killed 22 people and injured 24 others in and around a WalMart. He had driven some 650 miles across Texas. His apparent goal was to kill as many Mexicans as possible.

In Dayton, Ohio, a white man killed 9 people in half a minute, before being shot dead by police. His sibling was among his victims, and he has been described as violently misogynistic.

Politicians have been quick to push for better mental health screening for gun purchases. Donald Trump said that “mental illness and hatred pulls the triggers” in these shootings.

If the shooters in El Paso and Dayton are not insane, then they must be functioning without the rational bounds of some sort of logic. And that is a more terrifying prospect to many of us than the idea that they’re simply insane.

There are problems with this analysis, though. Mental illness is no more binary than physical illness is. If you eat too many French fries and don’t get enough exercise, you won’t necessarily get a specific illness, but you probably won’t be at the peak of wellness, either.

Physical illnesses can come and go through various treatments. My doctor reminds me every year to decrease the fat and sugar, and increase the vegetables and exercise. Since I started taking a statin, my cholesterol numbers have dropped and then stabilized. As a school teacher, I often get colds and flus that go away after a short time. Calling me “physically ill” because I’m not at the peak of wellness or sometimes sick is odd.

We tend to stigmatize mental health issues as if they’re permanent, insurmountable, and dangerous. None of those are true. Yes, there are some chronic mental health issues. Mental health challenges can also be a legitimate response to stressors, like loss of a job or a family member. Even positive changes like starting a new dream job can be stressful.

If mental illness were permanent and insurmountable, there would be no point in therapy. Yet, many people benefit from psychological therapy.

Besides which, mental illness is just not correlated to violent acts.

Mass shootings tend to be far more related to a steady diet of toxic information about the world. Red Pill blogs and Trump’s tweets are the bacon double Whoppers of the mind.

White men who go on rampages may not have full mental wellness because of their steady diet of toxic thoughts, but that doesn’t mean they have a mental illness.

Why would someone commit an act of extreme violence that might well end in their own death? Wouldn’t a sane person’s survival instinct prevent them from acting?

Someone who has made the most rational decision given the environment they’ve been placed in and the information they’ve been provided is, by definition, sane. If we tell white boys, then white men, that they are failures if they do not accomplish what their birth-right entitles them to, if we then blame the Other for creating obstacles, then we create an inevitable conclusion for some of them: Destroy the Other.

There can even be a prosocial aspect to this: Destroying the Other may result in destruction of the self, but it will improve the lot of all the other entitled white men who are struggling. That is the logic often revealed in their manifestos: They’re not doing it for themselves, they’re doing it for the other white men who cannot succeed on an even playing field.

I’m not blaming violent films. Early in this article, I listed four of my favorite movies, and I haven’t gone on any killing sprees. There is something deeply flawed about someone who watches “Natural Born Killers” and thinks it’s something to emulate in real life. The problem is not the messages in those films, it’s that that message often exists in a vacuum, as the only message.

We need to change the message we’re giving our boys. We need to stop relying on “boys will be boys” when boys are doing things that are flat-out inappropriate. We need to support boys when they cry. We need to stop telling white boys that they’re entitled to anything just because of their race and gender.

—
Photo by Sebastian Pociecha on Unsplash

Paul, Good article. Changing the focus from gun violence or the fact that most shooters are male to mental illness, is a classic way to pull attention away from real issues to false ones. As you point out, mental illness is not a significant cause of mass shootings unless you assume that anyone who kills people is by definition mentally ill. As you point out, the issues are both simpler and more complex.

Paul, your voice is important, please keep writing and sharing your commitment to emotional understanding. thanks

Thank you, Paul….very solid writing! I believe you capture it here: “We need to change the message we’re giving our boys. We need to stop relying on “boys will be boys” when boys are doing things that are flat-out inappropriate. We need to support boys when they cry. We need to stop telling white boys that they’re entitled to anything just because of their race and gender.” Joseph

Facebook350Tweet1Pin2Email1Shares354
wpDiscuz
Share this ArticleLike this article? Email it to a friend!
Email sent!