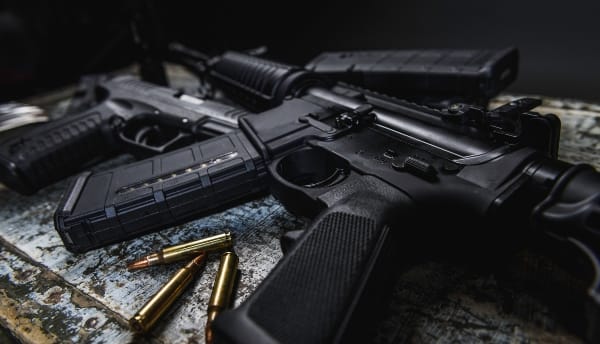 As the US reels from three back-to-back mass shootings—which occurred within the span of eight days in Gilroy, California, El Paso, Texas, and Dayton, Ohio—Michael Siegel, a researcher at the School of Public Health at Boston University, says that mirrored analyses of FBI and CDC homicide data serve to “double down” on evidence supporting laws that work to cut gun deaths.

“Using completely different data sets, we’ve confirmed the same thing,” Siegel says. “The main lesson that comes out of this research is that we know which laws work. Despite the fact that opponents of gun regulation are saying, ‘we don’t know what’s going on, it’s mental health issues, it’s these crazy people,’ which doesn’t lend itself to a solution—the truth is that we have a pretty good grasp at what’s going on. People who shouldn’t have access to guns are getting access.”

Siegel’s latest study in the Journal of Rural Health reinforces previous research findings that laws designed to regulate who has firearms are more effective in reducing shootings than laws designed to control what types of guns are permitted. The study looked at gun regulation state by state in comparison with Federal Bureau of Investigation (FBI) data about gun homicides, gathered from police departments around the country.

It’s a particularly compelling finding because in March 2019, Siegel and collaborators drew virtually the same conclusion by analyzing state laws in comparison with death certificate data the Centers for Disease Control and Prevention (CDC) collected nationally.

In that study in the Journal of General Internal Medicine, Siegel’s team analyzed 25 years of national data to examine the relationship between 10 different types of state laws and the number of deaths by homicide and suicide in all 50 states.

The National Institute of Justice and the Robert Wood Johnson Foundation Evidence for Action Program funded the studies.

State gun laws requiring universal background checks for all gun sales resulted in homicide rates 15% lower than states without such laws. Laws prohibiting the possession of firearms by people who have been convicted of a violent crime were associated with an 18% reduction in homicide rates.

In contrast, Siegel found that laws regulating the type of firearms people have access to—such as assault weapon bans and large capacity ammunition magazine bans—and “stand your ground” laws have no effect on the rate of firearm-related homicide. The researchers did not find that any of the state gun laws they studied were related to overall suicide rates.

Universal background checks, which have long been a top priority for gun control advocates and policymakers in the United States, appear to have the biggest impact. Though there has been a push for federal gun regulations in recent years, the power to legislate gun sales and gun ownership is largely beholden to the states. And according to Siegel, the data doesn’t lie. The average firearm homicide rate in states without background checks is 58% higher than the average in states with background-check laws in place. As of 2017, only 13 states, including Massachusetts, had laws requiring universal background checks.

Here, Siegel explains the findings of these two studies:

Q What’s different about the design of these studies?

A There are numerous studies that have examined the effect of particular state firearm laws, but there are few studies, until now, that have investigated the impact of multiple state firearm laws at the same time, using the same statistical model. Our goal was to assess the impact of multiple state laws using a single statistical model, while controlling for the presence of each of the other laws.

Q Which aspects of your findings are particularly striking to you?

A Tight regulation of who has access to firearms, rather than the type of firearms that are allowed, differentiates states with the lowest rates of homicides.

What surprised us the most was that in states that enacted a combination of universal background-check laws, laws prohibiting the sale of guns to people with violent misdemeanors, and concealed carry permit laws, the homicide rates were 35 percent lower than in states with none of those three kinds of laws. The practice of keeping guns out of the hands of people who are at the greatest risk for violence—based on a history of violence—appears to be the most closely associated with decreased rates of firearm homicide.

We also found that certain laws appear to be more effective depending on location. That makes sense because the nature of urban crime is somewhat different, and the populations in urban vs. suburban areas are different. In large cities with more than 100,000 people, we found background checks were even more effective at reducing rates of gun-related deaths than they were in suburban or rural areas. In contrast, we found that violent misdemeanor laws were more effective at reducing homicide rates in suburban and rural areas than they were in large cities. Permit requirements were robustly effective regardless of location.

This is suggestive that applying a cluster of different types of state laws is necessary, because not every law will work the same for each local population. 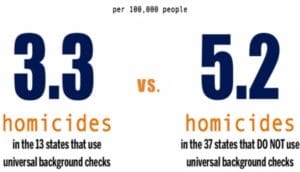 Q Can you explain the relationship between two types of laws you found to reduce homicide rates: universal background checks and laws prohibiting possession of firearms by people with past records of violence, aka violent misdemeanor laws?

A Laws regulating the sale of assault weapons are unlikely to have a large impact on homicide rates, because these weapons are used in only a very small proportion of homicides. The vast majority of firearm homicides in the United States are committed with handguns.

In contrast, laws that restrict access to firearms among those people who are at the greatest risk for violence—namely, people with a history of violence—are intervening among a subpopulation of people who are likely to commit crimes. In other words, you are intervening in the most focused way possible—that is, in high-risk situations. That appears to give you the greatest bang for your buck, so to speak.

Q What’s your take on advocates pushing for both universal background checks and bans on assault weapons?

A Although I completely understand the desire to ban assault weapons, I just don’t see empirical evidence that such bans have any substantial impact on homicide rates. These bans are most often based on characteristics of guns that are not directly tied to their lethality. In contrast, requiring universal background checks in all 50 states could have a substantial impact on gun violence because it would essentially set a minimum standard across the nation—that standard being very simply that people purchasing a gun need to be checked to see if they have a history that puts them at high risk for violence.

Public health advocates need to set priorities in terms of what policies are the most critical to enact. In fact, the primary purpose of our policy brief was to review the existing research and provide data on multiple laws in order to inform public health advocates and policymakers on this issue.

Q How, in your opinion, can lawmakers effectively reduce gun violence in their home states?

A I believe that the three most important things that lawmakers can do to reduce gun violence in their home states are to pass laws that: one, require universal background checks; two, prohibit gun purchase or possession by anyone with a history of violence, whether it be a felony or a misdemeanor; and three, provide a mechanism, called red flag laws, to address people who are at an extreme risk of committing violence, not only to other people but to themselves.

Q In that regard, how do Massachusetts’ state laws stack up?

A Massachusetts is one of the few states—also including California, New York, and New Jersey—that has a comprehensive set of laws regulating firearms. We have background checks, permit requirements, “may issue” laws where local police have lots of discretion in approving who can carry a concealed weapon, and a law that prevents most people convicted of a violent misdemeanor from carrying a weapon. We’re an example of state legislation that works—we have one of the lowest homicide rates in the nation.

That’s not to say we can be complacent, though. In the city of Boston, in certain neighborhoods, gun violence is a problem. We need to address that. But on the whole, the state does have strong laws.

However, it’s important to recognize that when other states surrounding you have weak policies, it undermines the effect of your own state laws, which is exactly what happened last week in Gilroy, California. The shooter went to Nevada to get a gun, because it’s harder to get a gun in California. That’s the argument for why federal legislation is important—individual states can’t do it all on their own.

Q Ohio has proposed a “red flag” law that would allow authorities to confiscate firearms from individuals that they have sufficient reason to believe pose a danger to others. Do you think this type of law would be effective?

A In the case of the Dayton shooter, we know that this is a person who should have been flagged as someone not able to possess a firearm. This individual made threats to kill and sexually assault high school classmates, he had a hit list with names written out. The principal and local law enforcement knew about it. It’s a perfect situation of an example that shouldn’t exist. I think a “red flag” law could make an impact—it’s hard enough to control people who don’t make threats. So when someone does threaten violence, they should not have access to a gun. The general picture that we’re getting is that if we can intervene in situations where there’s the greatest risk for violence to occur, that’s where we can have the greatest impact.

The writers updated this article with new information on August 6, 2019. The original version of this article came out on March 29, 2019.

A version of this post was previously published on futurity and is republished here with a Creative Commons License.