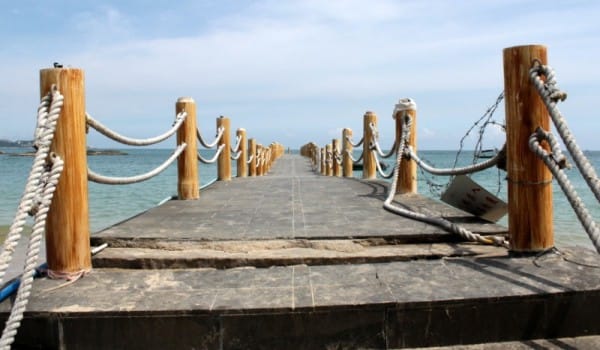 I’m embarrassed to say that after living in Haikou for a year and a half, it was only this past weekend that we finally got out of the city and explored a bit more of Hainan. I could blame a lot of things for the lax attitude about travelling around the island, but as this weekend proved, I simply need to try harder — the rewards are great.

It was all on a bit of a whim that Friday afternoon Maggie and I decided we should go somewhere before the rush of Mainland tourists descend on Hainan for the joint Mid-Autumn Festival/National Holiday kicking off later this week. We opted to test the waters, so to speak, by sticking somewhat close to home, and head to the next city down the high-speed rail line: Wenchang.

Wenchang is famous for two things — a good source of brides for early 20th Century Chinese power elites, and fatty, under-cooked chicken. So, admittedly, on paper — not the most attractive travel destination.

But it’s only an hour by bus (half-hour by high-speed train) from Haikou, and if you’re willing to get out of Wenchang a bit, it has its rewards.

We met up with our travel companions, Jonathan and Christina (and their two little girls), bright and early Saturday morning at Haikou’s East Bus Station. While the Hainan high-speed rail is great (I’m told), the major flaw is that the stations are all far outside city centres, and thus require an additional step in the transit process.

Instead we took a reasonably comfy A/C’d coach from Haikou to Wenchang (50 minutes, 19RMB), and then from Wenchang we grabbed a smaller bus to Longlou (~60 minutes, 7 RMB), a dusty one-stoplight town that’s only claims to interest are that it is a stone’s throw from some nice beach real-estate, and it is home to the new Wenchang space launch centre (of which we saw no trace of).

Before grabbing a couple 10 RMB sanlunche rides to the resort a few kilometres away, we decided to grab a quick bite to eat. We were pointed by a woman at the bus station (and I use the term station in the loosest way possible — it was a newspaper stand and a couple of chickens) to a collection of tables surrounding the outside of a wide open building just up the road. We found a table under a tree out of the mid-day Hainan sun and asked for a menu. With a look of confusion, the waitress explained they didn’t have menus, and we should just go into the kitchen and see what we wanted. We managed a table full of veggie dishes, and one Wenchang chicken. I will say this for the place, it put our expectations right where they needed to be for the rest of the trip to improve. As for my first Wenchang chicken — it is basically a celebration of everything Westerners prefer removed from their chicken — it is a plate of boiled, partially cooked, extremely fatty meat, chopped unceremoniously so that each piece contains maximum bone shrapnel. Ours was made complete with a few remaining feather stems still sticking to the pale rubbery skin. 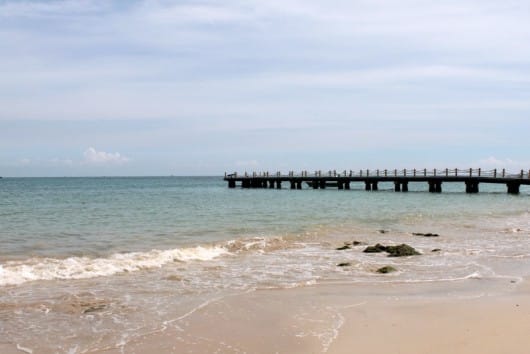 The only resort (advertised, at least) in the area is the Wenchang Tianfu Yunlong Bay Holiday Resort. Heavily doused in Chinese ostentatiousness, the resort is complete with a long driveway reminiscent of the Danbi Bridge at Beijing’s Temple of Heaven, and a massive Buddha statue.

We had to wait to check-in, and so wasted no time getting down to the beach and exploring a bit. The only Hainan beaches I’ve visited are Haikou’s and Sanya’s, and neither impressed me all that much. When compared to other beaches in China, they shine, but when held up to the white sands and clear waters that other SE Asian nations have to offer, they’re a bit lackluster. As such, I was pleasantly surprised when we were greeted with a rather stunning one at Yunlong Bay.

The water was as warm as a bath, and much clearer and bluer than anything else I’ve seen on Hainan so far. The sand stretches for miles, and–aside from the sun-lessened hours of dusk and dawn–was virtually empty. Even at the busier time late in the afternoon, people only congregated in a very small section of the beach close to the steps up to the resort. A short walk in either direction resulted in plenty of isolation.

The one downside to the water is that its shallows are littered with rough rocks hiding just below the surface. We didn’t explore enough of the bay to see if any of the other sections of the beach were clearer, but the area right by the resort wasn’t fantastic for casual swimming. This wasn’t a huge deal to us, as Casey is a bit apprehensive of the waves, and so we stuck to the large swimming pool instead.

Dinner at the resort can really only be got from one restaurant. Thankfully though, the food was great and reasonably priced and portioned. Outdoor tables allowed us to enjoy a bit of fresh air and fresh seafood while listening to the waves crash on the beach below. The grounds also feature a large BBQ area, but as the main clientele of the resort seems to be company getaways, you are expected to bring your own stuff for the grills. I was a bit disappointed I didn’t get some nice seafood BBQ, but the pit area was full of some well-liquored Chinese guys, whom we later discovered were quite the patriots (waving anti-Japanese Diaoyu Island signs), and so likely was best that we avoided it. 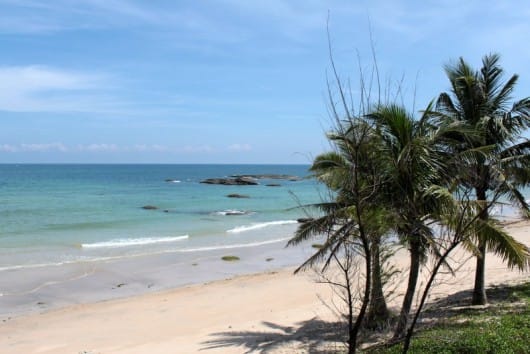 Day two was meant to be a trip to the Tongguling Nature Reserve; however, hiking up a mountain in the Hainan heat with 3 kids and one pregnant wife seemed a lot less appealing when we had the comforts of the resort at our disposal. The trip wasn’t without a bit of activity though. With time to kill before we had to check-out, I rented some snorkeling gear from the dive shop located on the grounds, and found that what the rocky water took from comfortable swimming it gave back in fish watching. Only a few dozen metres from shore I was greeted with a solid amount of coral inhabited by a wide variety of fish, crabs and other sea-critters. Twice I found myself in the middle of a cloud of tiny fish as a school, several-hundred strong, swam by me. We were told by the dive shop that better coral could be found out further, but it required a boat ride and a bit more time. They also offered full scuba trips as well, which I’ll definitely be looking at exploring the next time we go.

And there will definitely be a next time. All said, the trip was a relatively cheap weekend escape from the city, that while not a 5-star luxury experience, offered more than its value in fun in the sun. Before we found out that we’re having another baby, we had considered heading to Malaysia for the Christmas holidays, but now we’re somewhat forced to stay closer to home — and so it’s nice to know we have some reasonable vacation options just a couple hours away. 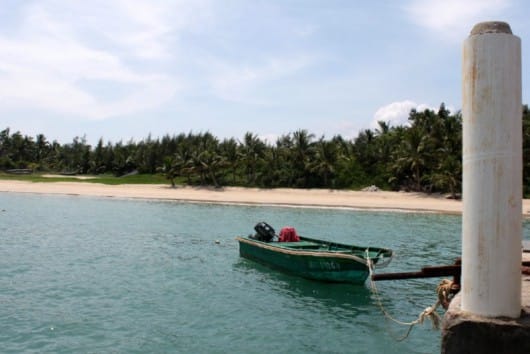