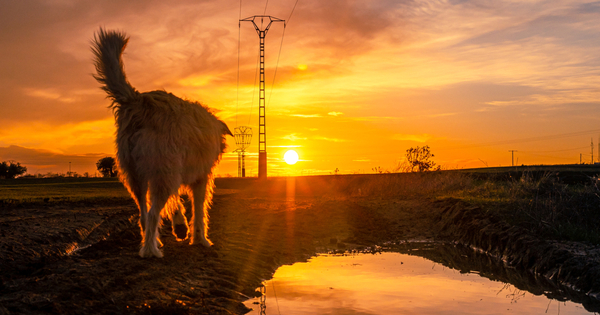 Last week I was dog sitting for my youngest son. Dog sitting isn’t nearly as stationary as the name implies, it involves a lot of chasing each other around the yard, a lot of tossing toys and a lot of walking. Dogs love to walk, his dog was willing to walk three or four times a day, for hours on end. When she saw the leash and harness she had a meltdown, so happy she would just shake, somehow her whole body would wag.

Last Sunday I got up early, we (me and the dog) went out and had coffee on the deck, and I read the newspaper. It was filled with bad news. The virus continued to run wild around the world, the senate was playing Russian Roulette with the national debt. Der Fuhrer, Trump was ordering people to ignore the subpoenas from the January 6th commission. Women are being reduced to chattel, minorities and marginalized populations are being pushed farther from the center by restrictive voting laws. Immigrants who want nothing more than safety for themselves and their children are being denied entry, sent back to the places from which they had fled. Prices are climbing, and the world is spinning out of control. Wild fires, approaching hurricanes, climate change raging right in front of our faces. It was depressing.

I got the leash and the dog went a little crazy. She was so happy it was hard to get her hooked up, it made me smile. We were off. It was Sunday, in early October, and the air was thick, humid, cloying and uncomfortably warm. It would part, grudgingly as you walked through it, and closed with a soft, sad sigh, like a tomb closing behind us. It didn’t take long before I was soaked with sweat, it dripped off my nose, and my shirt darkened with the moisture. My glasses were foggy and the world seemed, fuzzy, alien and hostile. October mornings in Ohio shouldn’t feel like this.

My friend, the dog, didn’t mind. She walked with her head held high, her tail swiped back and forth, she would look back at me with love and appreciation occasionally and it was a battle between misery and joy.

There were Styrofoam tombstones in yards, ghosts hanging from trees, ghouls, goblins skulking between yard signs endorsing school board candidates in the coming election, in a wild mixture of visions and frequencies colliding across the morning. After reading the paper it was almost surreal, and I couldn’t decide if I should be happy, sad, or indifferently amused. But, the dog didn’t care, the world was filled with smells and sounds and she immersed herself in them.

Our neighborhood has it’s northern border abutting a large metro park, and crossing from east to west almost in a line between the properties are power lines. These are hung from the enormous metal towers with multiple levels and lines.

When we turned a corner into a small cul-de-sac there was a perfect view of one of the metal beasts. It was huge, towering over the houses, trees, it glared down at me.

At the top of the monster were four arms sticking out to hold power lines. All four of them were covered in black vultures, a species that has thrived on climate change, moving north, and establishing itself comfortably in places it was once considered an occasional visitor. 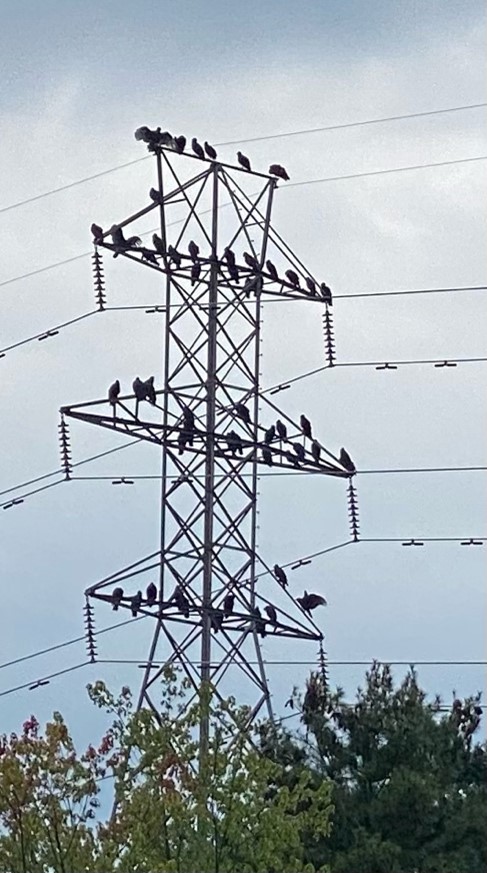 It was a terrible sight. An omen. A thought crept into my mind, and down my spine, causing a cold shiver to ripple up my sweat soaked shirt, and I felt a little sick. They were sitting there waiting for us to die.

Dozens of them, perched on the instrument of our destruction, the power lines running from some coal fired power plant. The lines feeding our self destructive needs, air conditioners, dishwashers, electric garage door openers, the power that chilled our deep freezes, illuminated our evenings against the gloom of approaching night. And it made a perfect spot to wait, and watch, and see our self destruction.

Eventually the dog got tired of waiting and nudged my leg, she smiled up at me and I realized society may be on the road to nowhere but somebody needed me to pick up my pace and move along. She hadn’t read the paper and she was just happy smelling the bushes and flowers for a while, and it made me happy, but I couldn’t forget the shudder inducing premonition. I might have to cancel my newspaper.