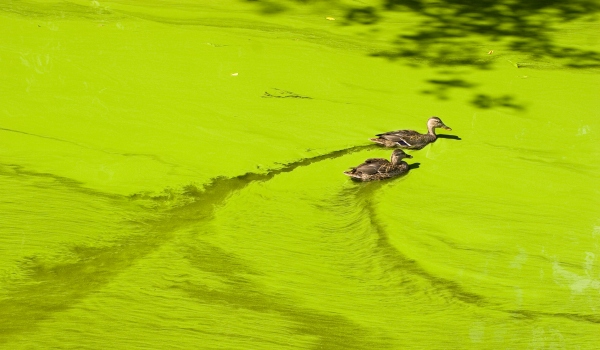 LONDON – Devastating algal blooms on one of the Great Lakes on the Canada-US border could become a much more frequent event, according to scientists from the Carnegie Institution and the University of Michigan. They report in the Proceedings of the National Academy of Sciences that conditions in 2011 were just right for a perfect storm of algal growth that turned Lake Erie an ugly blue-green, killed fish, fouled harbours, clogged marine engines, created oxygen-free dead zones and released unwholesome quantities of a liver toxin poisonous to mammals. And although the bloom was a consequence of the unhappy combination of agricultural management and unusual weather conditions, global warming could make such episodes more frequent. In 2010 conditions were fine for both the planting and harvesting of corn, wheat and soya in Ohio’s Maumee River basin. The Maumee drains into western Lake Erie. The following spring, record rains fell in May, dumping 75% more water than the average for that month, and washing large quantities of phosphorus fertiliser applied to the soil that spring down the water course and into the lake. The spring storms were followed by a fine summer, with calm winds and warm water temperatures. These conditions were ideal for the explosive growth of the toxic blue-green algae Microcystis, and the poison it produced was, at its highest, 224 times the World Health Organisation guidelines for safe levels.

The bloom began in mid-July over a 600 square-kilometre patch of water and then – because the conditions were perfect – began to spread. Because there were no currents, the potential nutrients stayed in the lake and because temperatures were mellow the algal bloom went on spreading. At its peak in October, a thick scum of the bloom covered 5,000 square kilometres. Blooms had happened before: this one was seven times greater than the average of the last nine years, and more than three times bigger than the last record bloom in 2008. The researchers took a long cool look at past and projected future climates, and came to a conclusion that – once again because of the continued release of greenhouse gases and consequent planetary warming – there would be an increase in “extreme spring precipitation events”. Stronger storms could be twice as frequent. Sluggish circulation of the lake water is also expected in future, because wind speeds across the US on average seem to be decreasing. So the conditions for devastating blooms will continue. “Lacking the implementation of a scientifically guided management plan designed to mitigate these impacts”, the paper’s 29 authors conclude, “we can therefore expect this bloom to indeed be a harbinger of future blooms in Lake Erie.” – Climate News Network