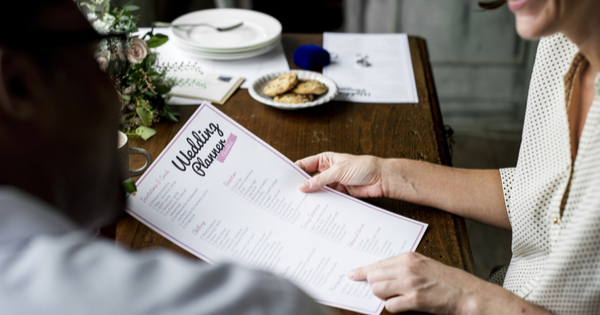 My fiance and I had only been engaged for three weeks before people started asking us where we were going to get married. Of course, we had no idea, but one particular person seemed concerned.

Places book up a year in advance so you have to start looking now!

In my mind I just thought, OK, so when we find a venue, we will get married a year from that date. That didn’t appease people. They were concerned. The verbal and tangible gesture to spend the rest of my life with somebody was great and all but, ya know… the venue was important.

We had no desire to rush the planning. We were still so excited to just be engaged. But that is what has been so fascinating about wedding planning. Everybody has a point of view. Married people. Unmarried people. Divorced people. And if you’re not sure what your point of view is, people will sniff you out like a coyote on a juice cleanse and impose their thoughts on you.

For us, it started the moment we told people we were engaged. Doing so quickly became a litmus test for how other people see the world. After asking to see the ring, people almost always ask one of two questions: How did it happen? Or when is the wedding? It reveals the way people think. They are either interested in how you got to this point, or they’d rather hear about where you are going next.

Generally, I prefer talking about the engagement. Mainly because it already happened and people can’t give their opinion on it. It’s a perfect success unaffected by whatever point of view they might have.

Regarding our wedding plans, people won’t outright disagree with us, but it’s easy to see when they have their own opinions. Usually, its because they immediately start sharing them with us. People love sharing the insights of what they did (if they are married) or what their friends did (if they aren’t). When they start to share their thoughts on what we should do I find myself wanting to say; “Thank you for your unsolicited opinion.”

I like to know a bit more about people before I ask their opinion (or they just give it). Another great litmus test is to ask people who they think the wedding reception is for; the couple or the families. Nothing makes people more divided or opinionated. They either complain about how they compromised or brag about how they didn’t. They sell you on their point of view.

That axiom though doesn’t solve all issues.

For example, we recently had a call with a DJ company to see if they were a good fit. While on speakerphone the representative asked us what kind of music we liked to listen to. My fiance and I looked at each other in dead silence. We listen to hours of music every single day, and yet we responded like we were being asked to provide the atomic weight of Neptunium.

It’s the kind of moment you don’t realize you aren’t prepared for until it happens. Somebody asked me recently what our wedding vows would be. I had no idea. I still don’t. And I have no clue when I will have an idea. But I’m pretty sure we’ll figure it out.

And that’s what this whole process is; figuring it out. We start knowing nothing. We look at examples. We get tired of looking at examples. We make a decision. At a certain point, more information just causes more stress. Is another venue really going to be that different? Will silver foil on our invitations improve the quality of the experience? Most of the time, the answer is no.

It’s easy to get caught up in all of it. The timelines, articles, and wedding hacks. Yes, it can be overwhelming and expensive with hundreds of seemingly ridiculous decisions, which is why it becomes so stressful for so many people. But it’s all just information. There are no hard and fast rules. I’m sure there are more fights ahead based on situations and options we’ve never discussed before.

But the decisions themselves probably don’t really matter. The only thing that will matter is how we go about the planning, how patient we are with each other, and how we make time and space for each other’s point of view.

Oh yea, and how good we get at saying:

Thank you for your unsolicited opinion.