Get Daily Email
Join/Login CLOSE
Home / Featured Content / What Are Your Pronouns? 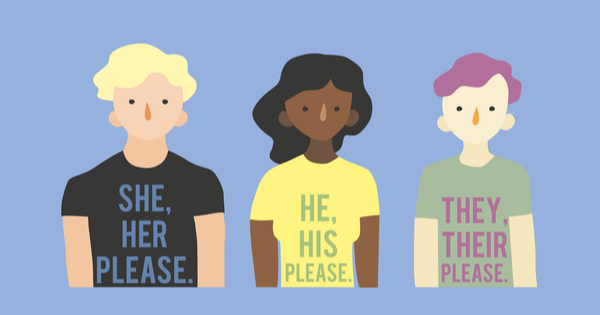 I just added a signature to my email. It says: “Jane Struthers (pronouns: she/her/hers)”.

But, you’ll probably ask, since that’s exactly what most people would expect, WHY include them? I was going to call you “she” anyway!

There’s a simple answer. Including your pronouns in your email and social media, even if you ARE gender-binary, is a recognition that the gender binary doesn’t apply to everyone. Even if it DOES apply to me (and it does!) there’s no way, simply by looking at me, that you’d know this. (Yes, despite me wearing a lot of pink and “femme” clothes, I could still be non-binary. Contrary to popular opinion, non-binary people don’t HAVE to dress androgynously!)

Including your pronouns is one way for gender-binary people to overcome the hurdles that our gender-binary ancestors have nailed into society. Sure, my pronouns are what a layperson expects. But having them there – simply the act of having them – causes the reader to do a double-take. And ask themself, Why did she include this information? Hopefully, they’ll realize that my pronouns might have been anything.

(And, yes, they might have been ANYTHING. But, despite my acceptance for non-binary people, I struggle with non-binary pronouns other than “they”. I’ll post more on this later, but the gist is that “they” is already a part of natural speech. I used “they” in the previous paragraph, to refer to a hypothetical reader of my post, and I bet you didn’t even notice!)

So, fellow gender-binary people, let’s band together and help advance our society. In all odds, pronouns have never been a problem for you. Maybe people have always called you “he” or “she” and you’ve never thought twice about it. Include your pronouns anyway. All it is, at this point, is a recognition that the assumptions we make might have been wrong. Realizing that there’s a problem is the first step in fixing that problem. Maybe, the next time after seeing that signature, the reader of your email will remember to ask somebody’s pronoun choice!

Adding your pronouns to your email signature takes less than five seconds. And it puts you years ahead into the digital landscape of the 21st century!