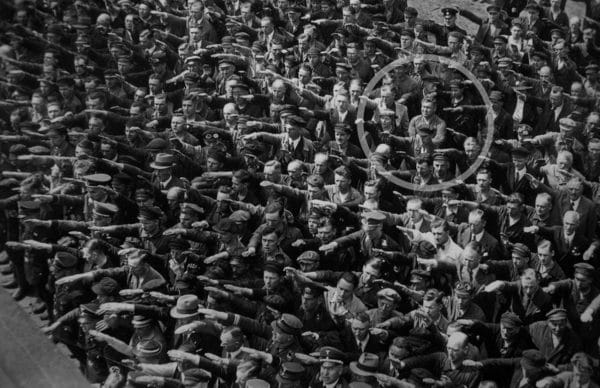 Liberty is never more precarious than in uncertain times. From the Great Depression to the Great Recession, from the Peloponnesian War to the so-called War on Terror, harsh times attract harsh measures. Sufficiently frightened, we humans become quite willing to trade liberty for security, citizenship for slavery.

Preferring security to liberty makes psychological sense. But in our modern world it can backfire. The evolutionary rationale for fear-based traditionalism, the search for certainty in a world fundamentally defined by uncertainty, rebounds — mutates — injecting into the populous what political psychologists call the “authoritarian personality.”

When sufficiently engrained into a society, the authoritarian personality tramples fundamental liberties in the name of illusory security. It censors out-groups, elevates in-group chauvinism, erodes the legal and political institutions essential to any society.

Historical anecdotes abound, for authoritarianism is human, all too human. It emerged in places as far apart in space and time as ancient (now modern) China and totalitarian Spain. Time and again, tyrannies rise atop the willing backs of the people, and the reason lies not in history or politics but within the darkest recesses of our human psyche.

The rise of Nazism provides a case study of the causes of authoritarian personality, the cures, and the dangerous consequences.

In the 1930s and 40s, the demonic spirit of National Socialism possessed millions of otherwise sane people by exploiting the fears and uncertainties of a country deprived of stability and therefore utterly craving order — even authoritarian order — to chaos. Nazism’s consequences ironically proved more chaotic than the disorder that nurtured it.

The familiar tale begins where the First World War ends. As too often the case when peace comes through war rather than peace, one war’s end triggered another’s beginning. On June 28, 1919, the Anglo-Americans and France forced Germany to sign the Versailles Treaty, a humiliating “agreement” bankrupting Germany’s treasury and — by unfairly giving Germany primary responsibility for the war — dignity.

The resulting sense of victimhood predictably provided potent fertilizer for right-wing populism. While the erection of the Weimar Republic suggested that Germany could restructure itself as a democracy, out-of-control inflation and communist-nationalist guerilla warfare convinced many Germans that democracy was, quite simply, inadequate to the task at hand: Restoring Germany. After all, a once-proud nation faced impotence. A people poised for European hegemony now floundered in bankrupt mediocrity. How humiliating! How contrary to the bloated Germanic ego! Only radical change could restore German prospects.

Thus, just as fear makes the modern human psyche more authoritarian — making us yearn for a foothold in an uncertain world — uncertainty-induced fear drew Germans to Nazism. The party was the outward manifestation of individual Germans’ increasingly salient authoritarian psyche.

To be clear, I’m not suggesting that moderners with an authoritarian psyche (at 60 percent, a majority) are Nazis. In moderation, the authoritarian personality produces social utility. It fosters cohesive cultures that kindle a reassuring aura of order and, ultimately, security. At their best, authoritarians are societal glue.

That said, while a moderate dose of the authoritarian personality is harmless, even beneficial, too much is toxic. It tramples liberty and stifles progress. As uncertainty-born fear, itself born of economic necessity and lingering humiliation, made aspects of the personality more salient to Weimar Republic Germans, the potential social glue of moderate authoritarianism morphed into social acid.

Thus it occurred that by the 1930s the Nazis — heretofore a non-factor — captured an exponential share of the German parliament. The middle-class — teachers, public servants, small businessmen, farmers — had suffered most from inflation; but as precariously situated members of the bourgeoisie, they feared losing what little they had to Bolshevism’s redistributive impulse.

Small businessmen proved especially receptive to Nazism’s anti-Semitic impulse, scapegoating Jews for their economic woes.The close of the 20s and the onset of the Great Depression only made Nazism’s redemptive claims more appealing and less absurd; the nationalist dream of a strong Germany grew ever more tempting as Bolshevism seemingly threatened to undo what little the middle classes had left.

As economic uncertainty increased, so too did the desire for stability. As the longing for stability increased, so too did Nazi membership. This is unsurprising. Authoritarians are concerned, historians Hetherington and Weiler write, with combating “normative threat” — manifested in Nazi Germany by the Bolsheviks. “Those who score high in authoritarianism … are, first and foremost, concerned with maintaining the social order and opposing that which they believe undermines that order.” This distinguishes authoritarians from conservatives. Conservatives want to maintain the status quo out of respect; authoritarians act out of fear of subversion.

Rendered authoritarians by desperation and war-weariness, many Germans were only too eager to give Hitler a try. Hitler was a prophet, a savior, and even if he proved a failed prophet, well — could things get worse? Ironically, though the Nazi Party — through its paramilitary “brownshirts” — was a chief driver behind the raging street warfare, key to Hitler’s appeal to a frightened middle class was his vow to restore law and order by suppressing communist militias.

The promises worked. Catalyzing fear, buoyed by the chaos engulfing German streets and psyches, Hitler’s flock of sheep — baying ever more assertively — grew, both in size and confidence. On January 30, 1933, the once cash-strapped artist became chancellor. Beaming with confidence, an exultant Hitler declared publicly:

The great time has only begun. Germany has awoken. You mustn’t act yourself[;] you must obey, you must give in and you must submit to this overwhelming need to obey.

For a population bereft of collective or individual purpose, such words must have seemed nothing less than divine.

Even today, Hitler’s words speak to the authoritarian psyche’s core. Authority is cherished for its ability to foster order; “freethinking” is derided for its tendency to promote epistemic chaos. Authority is stability; freethinking, anarchy. Before long, Hitler’s actions mirrored his words, and the tyrant moved quickly to exploit real and imagine “security needs” in order to check civil liberties.

For example, in February 1933 he used the Reichstag Fire as a pretext to suppress opposition. (Some theories suggest Nazi culpability. If so, the party likely recognized that fostering such a chaos would increase its authoritative appeal.)

Though the Nazis may have lacked neat labels like “authoritarian personality,” they demonstrated an impressive awareness of the human psyche. And it helped them gain power. Immediately after the Reichstag fire, Hitler pressured Weimar president Paul von Hindenburg to grant him an emergency powers decree suspending civil liberties guaranteed by the Weimar constitution. On March 23, via the Enabling Act, the Reichstag bequeathed dictatorial powers to Hitler. Thereafter, he would manage the country’s affairs by decree.

At that point Nazism had already seized near-absolute control. To speed the drive toward totalitarianism, the Nazis abolished labor unions and political parties and imprisoned opponents — first in jails, then in concentration camps. By the dawn of war, the transformation reached its apotheosis; liberty perished at the altar of ersatz security, and Hitler was the psychic equivalent of a god. The consequences of Germany’s abdication of uncomfortable thought for comfortable obedience? The deaths of millions.

Nazism’s rapid ascent raises disturbing questions about who we are and what we are capable of. One thing seems certain: Our human yearning for certainty in an uncertain world can cause great harm.

The danger lies in our propensity to take this psyche to an extreme. Perhaps the greatest lesson of Weimar Germany’s degeneration into fascism is that we must always question our biases, responding instead of reacting, using System 2 thinking to keep System 1 feeling in check.

Hitler’s morally and intellectually superior contemporary, Franklin Roosevelt, expressed the solution to the authoritarian personality best when he uttered his famous warning. It is a warning that is increasingly relevant today, and one that fearful souls who yearn for closed systems — who crave order over chaos, and certainty over uncertainty — should heed: The only thing we have to fear is fear itself.

A famous photograph in which one man, thought to be August Landmesser, refuses to give the Nazi salute. Landmesser, who married a Jewish wife, was eventually imprisoned and killed by the Nazis. Credit: Public Domain.

Facebook47Tweet3Pin2EmailShares52
wpDiscuz
0
0
Would love your thoughts, please comment.x
()
x
| Reply
Share this ArticleLike this article? Email it to a friend!
Email sent!