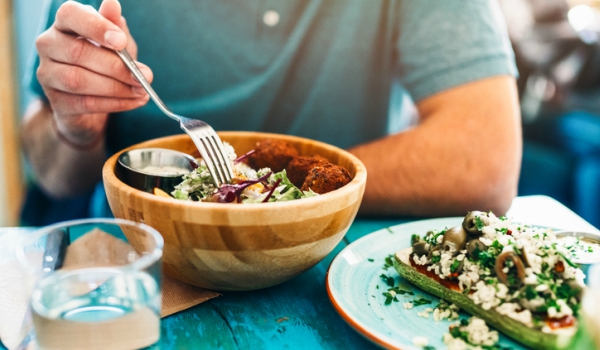 I had one of those kinds of dreams last night where

I was just dropped into it and so my first task was to identify my first task. I was in a restaurant, the name of which was in Cyrillic letters, and there was a young man on the other side of the table who looked vaguely familiar.

Very light brown hair cut fairly short — not reaching his ears — and a shadow on his chin where showed the outlines of a wish beard. That’s where you do not shave your chin and wish you had a beard.

I gave up trying to identify my dinner guest and ran my hand deep into my right front pocket, only relaxing when I could feel my wallet. In the past, I’ve been dropped by a dream into a situation where I was expected to cover the tab without money.

How did I know that my wallet contained money and credit cards? I just knew. It usually does, and finding it in my front pocket was a reassuring tether to reality.

How did I know that I was expected to cover the tab? I just knew. This was a white tablecloth joint and the young man across the table did not look terribly prosperous. The thought led me back to his face and I recognized him.

Edward Snowden. That located me in space if not in time. I was in Moscow. I could only hope the time was within two years of the present, so my passport would not be expired.

Snowden was speaking to me. “So, I expect you are here to talk to me in?”

“Yup” — -I saw no reason to blow smoke — “I’m here to tell you the national motto has changed.”

He had to think about the national motto, but he came up with what most people would consider the answer: “E Pluribus Unum.”

I had the advantage of having looked it up, so I could sound erudite. “Congress adopted E Pluribus Unum in 1782 to go on the national seal. In 1956, Congress actually adopted a motto: ‘In God We Trust.’”

Excuse me if I don’t skip around Red Square strewing flowers.

“No need for sarcasm — I brought plenty with me. I was going to tell you the new motto is ‘Post-Politica Veritas.’”

“I know Trump has been radically re-structuring the whole country’s relationship with the truth, but are you telling me Congress is going along by adopting “ ‘Post-Truth Politics’?” Why don’t you demonstrate how much has changed by telling me why the Ambassador to Ukraine got sacked?”

I had thought this boy wasn’t getting out much. I asked him, “Where do you get breaking news?”

Mostly CNN Europe. We only get the papers once a day.

“Well, you’ve been watching enough to know the whole U.S. government is a big game of 52 picks up right now and the cards are still floating on the wind. For my next act, I’m instructed to offer you a good old American dinner — for the purpose of making you homesick, of course.”

“Of course. But how about we have a little duel of menus to see if I can lure you to Russia?”

“It would take a free press to lure me to Russia, but I’m always up for trying the local chow. What have you got?

I thought borscht was served cold?

“It is, except when it isn’t. Let me finish. I see they’ve brought us a small loaf of fresh rye bread with fresh butter. Then, for the entrée, you can choose between pirozhkis with several choices of stuffing or — off the tourist menu — beef stroganoff. I recommend pirozhkis.”

“Sounds great, but before we order up the hot borscht you gotta give me a chance. When I took this gig, I made the State Department pick up the tab for my pal Eddie Wilson, and the proprietor was kind enough to give Eddie the run of the kitchen. He’s been cooking since before we sat down. You can’t send us away without considering the bait we brought.

“I got a nice tortilla soup with a loaf of jalapeño cornbread on the side. Then I got a chicken fried steak with cream gravy served with some of those twice-fried potatoes we used to have at The Raw Deal. If you have room for dessert, I brought a peach cobbler.”

Snowden’s eyes opened up wide and he dabbed the corners of his lips with his napkin. There was a long silence, and then he asked,

“What can you do about my legal problems?”

“You would get the full bore protections of the Whistleblower Protection Act of 1989. You can take to the bank that you would be treated no worse than the man or woman who just turned in Donald Trump for soliciting political help in Ukraine.”

Snowden got a funny look on his face and then he busted out laughing. He laughed so long and hard he had to use his napkin to intercept tears.

Man, you had me going with the smell of that

chicken-fried steak. Let’s get started on the tortilla

soup, but you need to taste the borscht first so you

can tell the poor schmuck who turned in The

Donald how good it is. I expect another

whistleblower will be taking up the ex-pat life.

I saw no point in arguing with him about whether he is a whistleblower. His mind is made up, and this mission was doomed from the start. My airplane already had landing gear up when President Trump was caught on video waxing nostalgic for the days when he could shoot spies. And he plainly could not tell a whistleblower from a spy.

If I had known he would imply a death threat for Snowden, I would have refused this gig. Bad attitude and bad timing. Snowden was an interesting dude, though, and I looked forward to dinner. But when I turned around to continue our conversation, I could see the wall in my bedroom. Talk about bad timing — my dream ended before they brought out the chicken-fried steak.