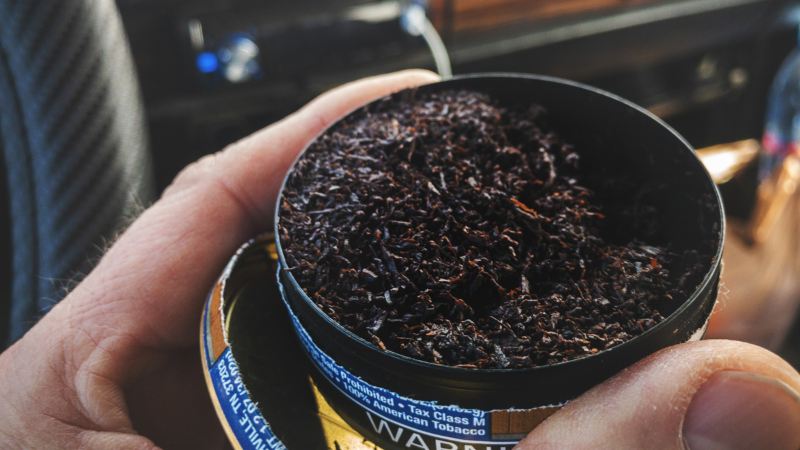 Even if you’ve never tried it yourself, you’ve doubtless seen people doing it. They’re mostly (though not exclusively) men and are recognizable by a bulging cheek or lower lip. The outline of a circular tin is often visible in one of their pockets. The more circumspect ones carry cups or soda bottles unobtrusively and surreptitiously spit into them, while others openly expectorate on the ground as they stand or walk. Specs of blackish-brown are often visible between the teeth. It’s not a habit that stays hidden long.

Nearly 12 years ago, on September 20, 2008, I quit smokeless chewing tobacco. Before that, I had been chewing off and on (mostly on) since 1988, when I was a junior in high school. 20 years of chewing, which translates to over 1,000 weeks and more than 7,000 days in which I put a pinch of tobacco in my mouth between my teeth and gum line.

I’m not proud of my chewing and have never written about it before, but I felt compelled to write and share in the hopes that others who chew or with a similar habit may come across this and understand that they’re not alone and can quit, even if they’ve been doing it for many years. If I am proud of anything, it’s that I’ve never relapsed in the almost 12 years since I stopped. I wish I could say it’s because of my indomitable will or resolve, but it’s more because I’ve established set routines in my life such that I’m almost never around people who chew and where I might be tempted. Habits definitely keep you going, to paraphrase Jim Rohn. I remember, though, how easy it was to begin …

It started in high school. I played sports and a number of my friends chewed. They used to roll up a few sheets of paper into makeshift spittoons and dip (slang for chewing) in the stairwells. They would also chew after football or wrestling practice, walking home in groups, varsity jackets, and chew. One day, after months of observing a couple of my friends chew and working up the resolve, I asked if I could try. My friend who I’ll call Tim handed over a green plastic tin with white lettering.

For the unfamiliar, while most smokeless chew is packaged as “loose” tobacco that looks a lot like wet coffee grounds, pouch tobacco comes in pellet sized one gram pouches. Little bags of tobacco, basically. As consuming most loose tobacco is messy, pouches are cleaner, but also far less potent. Starter chew, basically.

I extracted two pouches from the tin and inserted them in the lower left side of my mouth, snugly between my back molars and cheek. Almost immediately, I felt juices mix with saliva and a soft buzz. It was a warm, pleasant sensation that made me feel invigorated and relaxed. Who knew chewing tobacco produced this kind of high? The sensation peaked after about 10 minutes but I knew I wanted to experience the feeling again.

I didn’t immediately start chewing every day. Initially, I would do it only when I was with my friends who were regular users and I would occasionally “bum” pouches. Eventually, I started buying my own tins. At first, it was weekly, but it wasn’t long before I was consuming a tin a day. For the first few weeks, I would still feel a buzz when I dipped, but it gradually lessened until I no longer consciously felt the high.

One day I expressed this to Tim who had graduated to chewing loose tobacco and he suggested I try that for more potency. I pinched a hefty amount of the dark loose tobacco, put it in my mouth, and the buzz came back, ten-fold. It was so strong, I gagged at first and almost vomited, a rite of passage I would learn is common among beginning chewers. I would also discover in time that accidentally swallowing tobacco juice would produce similar gagging or retching.

I became a habitual, daily chewing tobacco user. I chewed every day, at different times and places. In the morning, in the car, when playing video games, while traveling, while socializing with friends, after meals, when watching movies or sports, when reading, after (never during) dates, after playing sports, on the way to and from bars, and in the evening. Sometimes I chewed with friends and fellow users, but mostly I chewed alone. Smokeless tobacco in effect became my constant companion, a reliable source of comfort and calm. For many years, I avidly played computer games, and I recall gaming and chewing well into the night. My buzz from chewing receded in time and time and eventually disappeared completely, but it didn’t matter: I was hooked.

Smokeless tobacco stayed with me through high school, college, grad school, several relationships and moves of residence, a series of cars, my wedding, and even the birth of my daughter. If the collective chew from my formative and early adult years could be interviewed, it could tell you more about me than anyone from those days. It knew when I was happy or sad, when and where I liked to position my dip cups, when enough time had passed after a meal for prime tobacco absorption, and—most importantly—when I needed that routine or stress-relieving fix to take the edge off. Fortunately, in the 1990s and 2000s, chew was always in constant supply, usually behind the counter at gas station convenience marts, which I would frequent at all hours, so I never had to wait or travel far to feed my habit.

About the only time I didn’t chew, and took pains to hide all traces of it, was when I was around whoever I was seeing romantically. While I’d heard that some women accepted chewing and even did it themselves, this was not the case with any of my girlfriends. At best, they tolerated my chewing for stretches to keep the peace. But over time, they were increasingly put off by the habit, with the spitting, dip cups, loose bits on my hands and under my fingernails, remnants in my teeth, and the acrid smell. And they especially feared the health risks, which ominously included gum disease and mouth cancer.

This led naturally to my compartmentalizing and hiding my chewing from not only my girlfriends but everyone in my network, except my friends who also did it and wouldn’t judge. If chewing was not socially acceptable, I would do it alone or among my tribe of chewers who shared my habit and shame. I also scrupulously hid any traces of it, carefully discarding spit cups and brushing and flossing my teeth five, six, or even ten or more times a day. I had become like a Lady Macbeth of smokeless tobacco users, muttering “Out damn spots of tobacco,” as I vainly struggled to brush away every speck of tobacco.

Of course, I couldn’t brush away the reality that I was addicted and deep down I knew chewing was a dangerous, unhealthy habit on many levels and there were many times when I would realize this and try to quit. Sometimes, I would be inspired by a resolution or new healthy lifestyle kick. Other times, I’d feel frightened into action, after seeing a particularly graphic image of a patient missing half his jaw or reading about cancer and facing intimations of my own mortality. Still, chew was always there after the initial shock or motivation to quit diminished and remained as a patient friend who always welcomed me back, whether it was after a day, week, or longer.

In the end, it was my subconscious that provided the impulse and resolve to quit. The moment came jarringly through a dream. It was a few days after my daughter’s first birthday and in the dream, she was a few years older, perhaps 5 or 6, and I was in her bedroom with her, but I was fixed in place and only able to observe. In the dream, she looked through me at a picture on her dresser of the two of us, me holding her when she was a baby, and her eyes welled up with deep tears.

I tried to break free to walk toward her and speak but I remained rooted in place and could not shift or make a sound, for my mouth and jaw were gone. In my dream state, I realized I was departed and had passed, taken by my constant companion chew.

I woke up in a cold sweat, terrified and shaken. All at once, I wanted to weep for my dream self who would miss so much but also thank him and my subconscious for the jolt that I needed.

As I started my day, I processed the dream into action, and I knew I was going to quit.

The feeling was similar to the scene from the film “Fight Club” when Tyler Durden points a gun at a young store clerk. With the clerk on his knees begging for his life, Tyler asks him what he wanted to do in his life, and the clerk responded that he always wanted to become a veterinarian but never found the time.

After more conversation, Tyler takes the clerk’s driver’s license and tells him, “I’m keeping your license. I’m gonna check in on you. I know where you live. If you’re not on your way to becoming a veterinarian in six weeks, you will be dead. Now run on home.”

After the terrified clerk flees, Tyler says, “Tomorrow will be the most beautiful day of Raymond K. Hessel’s life. His breakfast will taste better than any meal you and I have ever tasted.”

Indeed. But it’s not exactly that life tastes better without chew. Even after all these years since I quit, I can easily recall the sweet and mild wintergreen taste against my gums, tobacco juice washing over, with happiness. But while chew created the perfect lining that at once tasted great, it also acted as a barrier between me and the world. Chew was ultimately that cool but codependent friend, a little dangerous, who made me feel whole and enough, but really was suffocating me.

What’s different since I quit is I’m now able to handle all the many tastes of life on my own and with if not universal contentment than at least acceptance.

~~ from “Taste The Pain” by Red Hot Chili Peppers

Frank Gullo is a business professional who writes in his spare time. His past credits included short stories and publications in Business Insider, Computerworld, Information Outlook, and Ragan’s PR Daily.