Get Daily Email
Join/Login CLOSE
Home / Featured Content / Why Is the Leaning Tower of Pisa Leaning? 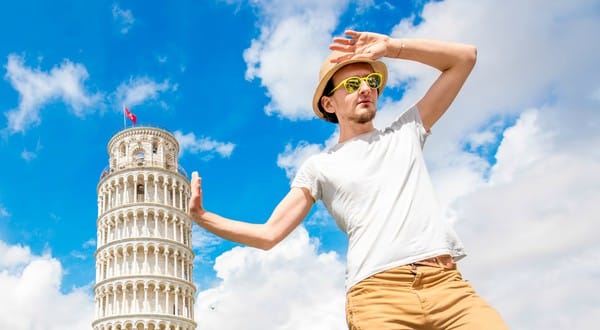 —
Constructed in three phases, the Leaning Tower of Pisa is definitely the most well-known architectural maverick and one of the great wonders of the medieval world.

And this wonder does perfect justice to its name. IT ACTUALLY IS LEANING.

Construction of the Leaning Tower of Pisa occurred in three phases, spanning nearly two whole centuries due to war and social unrest. It began on August 9, 1173. And the tower stood upright for the first five years, but, by the time builders finished the construction of the second floor by 1178, the whole structure began to lean. To compensate for the tilt, engineers built columns and arches on the third story slightly taller on the sinking side, and by the time they reached the fourth the story, the construction was halted due to political issues.

Few more adjustments were attempted in the fifth and sixth story, but construction was once again halted after that. In 1372, when the tower was about to get completed, the builders made one last final attempt to fix the leaning of the tower, by angling the eighth story bell chamber.

Each and every attempt went in vain as the tilt continued to worsen throughout the centuries.

It was in 1911, when careful monitoring and measurements revealed that the top of the tower was moving at a rate of 0.05 inch a year; and although political and social unrest throughout the centuries led to postponement in the construction but had these construction respites not occurred and allowed time for the underlying soil to settle down gradually, its highly likely that the tower would have toppled well before its construction.

It was in the 1990s when researchers found out that the tower had been built atop an inadequate foundation which was only 3 meters thick and composed of sandy and clayey silt. Silt has the tendency to retain moisture and it drains poorly. This causes the silty soil to expand, pushing against a foundation and weakening it, making it not ideal for support. The stabilization effort for the tower was begun which was completed in 2001.

It was John Burland, an English geotechnical engineer, who finally solved the 800 years old mystery and answered the question, “Why exactly was the tower leaning?”

He discovered that the primary cause of the constant tilt of the tower was the fluctuating water table which would perch higher on the tower’s north side, the lower water table on the south hence results into compaction of the soil below, causing the slant to the south.

It was in 1935 when the first modern attempt to stabilize the tower was done. Engineers attempted to seal the base of the tower and this was done by drilling a network of holes into the foundation and then filling them with a cement grout mixture. However, instead of helping, this only worsened the problem by slightly increasing the lean.

In 1990, the tower was closed for the public and apartments and houses around the tower were vacated for safety. It is very important to retain the tilt of the tower, for the denizens, due to the role that this element played in promoting the tourism industry of Pisa. Then, the preservation team led by John Burland, finally took action in 1992 and the first story was braced with steel tendons, to relieve the strain on the vulnerable masonry.

In 1995, the team used underground steel anchors, to yank the tower northwards. The anchors were to be installed 40ms deep and in the view of Pisa’s high water table, in other to protect their excavation from flooding, they used liquid nitrogen to freeze the underlying ground. But one thing that they didn’t take in consideration was, that the water expands on freezing. As a result, groundwater beneath the tower was pushed up and once the freezing had ceased, gaps were created leading to further settlement of the tower. And, in a desperate attempt to prevent the loss, the anchor plan was dropped and 300 lead ingots were added.

In the end, it was realized that soil extraction was the only viable solution left, as it had the advantage of not touching the tower itself. The process focused on the removal of soil from below the high north side of the tower which would create a condition of controlled, localized, subsidence; and allow gravity to get the structure back upright. Work continued from 1999 to 2001 and approximately 77 tons of soil had been removed and the tower had been straightened by 44 centimeters, returning to its 1838 inclination.

Certainly more soil could have been removed, but the soil extraction program, reduced the stress on the vulnerable first story enough to be safe, yet also maintained the distinctive lean of the landmark. The tower was opened for public in December 2001.

In 2003, when Mr. Burland discovered that the root cause of the lean was a perched water table, which overlay on a silt layer, below the north side of the tower, and was fluctuated during the rainy season, sometimes coming within 12 inches of the surface, he introduced a new drainage system beneath the Pisa’s north side. And this new drainage system addressed this condition. The inclination was monitored daily and it was revealed that the tower did not move at all between 2003 and 2009.

This post was previously published on www.eco-intelligent.com and is republished here with permission from the author.
—