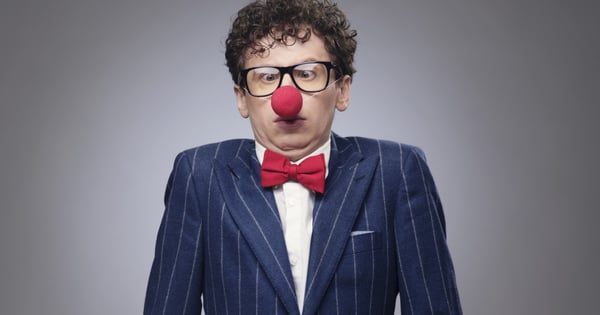 It’s nearly impossible to find a truly funny comedian on the right side of the humor divide.

Here are the five reasons why conservatism cripples the ability to tell a joke:

1. Regressive, conservative viewpoints are unfunny. Conservatism is associated with the past, the obsolete. We’re all raised to make fun of our parents, the generation before us, which the young view as stuck in boring convention and outdated, stale ways. We grew up thinking that “old and stodgy” were funny, so we’re subtly trained to mock conservative viewpoints. Liberalism is associated with progress and moving forward. The future isn’t as funny as the past because it’s hard to ridicule what is aspirational. Aspiration is hopeful and upbeat; anachronism is darker, worn out, and downbeat. So, from their entrenched position in old thinking, conservative comedians can’t be funny.

2. Because liberals are progressive, they are willing to push to new places and break rules, and that’s funny. Breaking the rules and pushing the edges of the known are what make people laugh, whether it’s about politics, sex, workplace stupidities, relationships, or life in general. Conservatives are afraid to break rules — they are trying to preserve the known and protect the past. There’s no edginess to that, so there’s no humor in it.

3. Conservatives isolate. Liberals don’t. Conservatives are committed on isolationism, keeping others out and themselves locked in. The result—they tend to have less exposure to other people, cultures, countries… and comedy. Some of the best humor is born out of the differences and, more often, the similarities between the world’s citizens. But you can’t know that when you hide in a box…or behind a wall.

4. Conservative humor grows in a putrid, mental Petri dish. Conservative comedy is gestated in a marinade of racism, sexism, homophobia, ethnocentricity, and generalized fear. Fear is a really terrible place from which to grow humor. I’m not talking about neuroses — neurotic, self-effacing humor is funny. I’m talking about the fear that makes us hate and hold onto prejudice; the fear that makes us denounce and condemn. The genesis of that kind of humor is never inclusive, but always exclusive, and that’s not funny.

5. Conservatives can’t make fun of themselves. Much of the best humor is self-effacing. It gets its power and strength from pointing to self-perceived “weaknesses,” which actually reveal the humorist’s self-confidence, as well as likeability. Because conservatives draw from a well of fear, their humor is dreary, not droll. And they’re seldom likeable. It’s hard to laugh along with someone you don’t like.

Conservatives aren’t freaks born without a funny bone. They’re just so tight they can’t be truly clever or creative…or comedic. Because they don’t get the joke, they always fail as the jesters of our time.

Previously Published on The Democracy Guardian

Allan Ishac is the author of several books. His articles on men’s issues have appeared in GMP (https://goodmenproject.com/author/allan-ishac/) and he posts political satire regularly on medium.com (medium.com/@allanishac).

FacebookTweetPinEmailShares176
wpDiscuz
0
0
Would love your thoughts, please comment.x
()
x
| Reply
Share this ArticleLike this article? Email it to a friend!
Email sent!