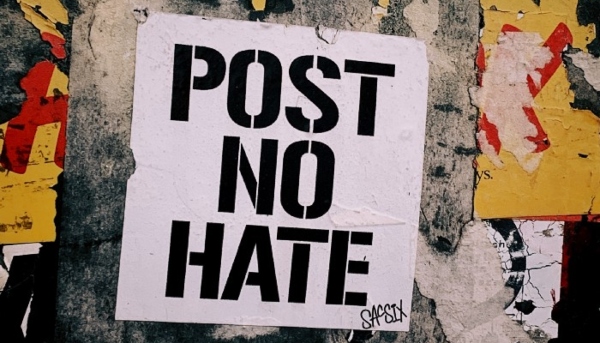 It is very disheartening to me that people can still walk around America being hateful to people based on their race, gender identity, sexual orientation, etc. It’s unacceptable and should be criminalized.

What about the rights of the person your hate speech is offending?

The constitution is supposed to protect ALL AMERICANS. How does not regulating or criminalizing hate speech protect the targets of that hate speech. It doesn’t. Your freedom of speech shouldn’t negatively affect someone else’s life. That’s when you move from liberty and freedom into the area of privilege.

Why should someone have to feel less than or threatened because of your use of “free speech?” Shouldn’t how everyone feels matter?

Let me ask you this, if it is against the law to yell fire in a movie theater, shouldn’t it also be illegal to run around yelling derogatory words at people based on their race, gender identity, sexual orientation, etc.

What is the exact purpose of allowing this toxic speech?

Our U.S. Constitution essentially allows people to hate, and proudly say so if they do. As long as you don’t get violent or kill anyone.

Maybe it’s time we make some amendments to the 2 centuries old document.

I have heard many of the arguments against regulating or criminalizing hate speech. They say banning any form of speech isn’t something you should do in a democracy.

If you think about it, doesn’t the continued allowance of hate speech lead to the violence? In that regard, it makes no sense to allow hate speech, but not allow language that leads to imminent violence. Shouldn’t we focus on preventing violence before it becomes imminent violence?

The fact is when we don’t regulate or criminalize hate, we say it’s okay to do it. It’s not okay. It will never be okay. Yet somehow it is quite common in America. We shouldn’t allow hate because allowing hate essentially means you are okay with hate continuing to be taught.

Put yourselves in someone else’s shoes before you speak. Your words can cause harm. If words weren’t powerful enough to cause harm, why would freedom of speech and expression be so important that it is included in the U.S. Constitution.

Words can also heal. Why don’t we try spending more time talking kindly to people, regardless of their race, gender identity, sexual orientation, etc. So many people claim that everyone should be equal. The Declaration of Independence literally says we are all equal, yet we aren’t treated equally.

It’s time for a change.

Let’s stop allowing people get away with discrimination and hate. It is up to us to hold everyone accountable for not only what they do, but what they say as well!

What actions can we take against hate speech?

Since they aren’t criminalizing or regulating hate speech in America, we have to take matters into our own hands.

No one should be the target of any hate speech based on their race, religion, ethnicity, gender identity, sexual orientation, or disability.

The fact is that waiting until hate speech leads to immediate harm is irresponsible and a complete lack of empathy.

Well, we can start right here on Medium. No matter where we are, it is very important that we speak up about injustice and demand equality, inclusivity, and diversity. By participating in what is called counterspeech, we are able to undermine hate speech with logic, love, and truth. The more we undermine hate speech, the more it begins to lose its power.

We also must act on hate!

We absolutely must speak out against injustice and inequality! Educate the people around you.

Remember that no one is better than you, but you’re also no better than anyone else. We must be loving, kind, and decent. We cannot defeat hate with only more hate. However, we also cannot expect the oppressors to willingly stop oppressing. We can be kind and still demand equality.

One day I hope that we can all treat each other as equal human beings, regardless of anything else.

“I look to the day when people will not be judged by the color of their skin, but by the content of their character.” — Martin Luther King Jr.

Or by their sexual orientation, gender identity, etc.

Here we are in 2020, yet people still don’t know how to practice acceptance of all human beings. What we have been doing isn’t working. Let us try holding people accountable through regulating and criminalizing their hateful speech and behaviors.

It is free to be kind. It is free to lift each other up. We should no longer stand by and accept hate. It has gone on far too long in this country. Hate and violence against all types of diversity. Enough is enough. Let’s stand up and take our country back for the freedom and equal rights of EVERYONE.

No one should have to live in fear. We need to demand empathy from our leaders!

The young people of this country will be the change we need. Older people have had to be convinced that we all deserve equality. With most young people, equality has been a given. Let’s harness that and let it help us make the changes we need in this country and in the world.