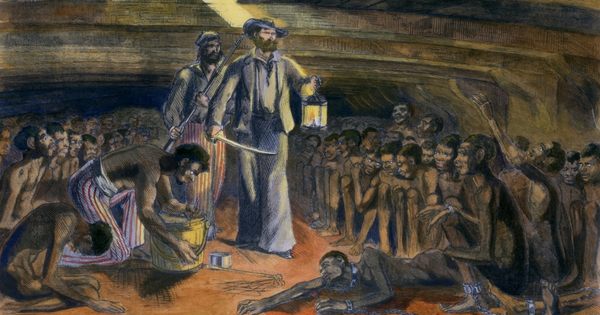 Every February when Black History Month comes around, like clockwork a small percentage of people take umbrage that black people get a month to celebrate their history and there is no White History Month to counterbalance it. I used to argue that white history is taught year-round and there’s no need to set aside a month to focus on it. I’ve come to realize that we do need a White History Month if not two or three. Truth is, a whole lot of white history has been left out of the books and Americans of every color need to be aware.

The white history we’ve been taught is mostly a fallacy. We were taught that George Washington had wooden teeth, not the reality that his false teeth included teeth taken from slaves, likely his own. George Washington treated his slaves like every other slaveowner of the time. He tore apart families long before Donald Trump, he authorized beatings to maintain order.

Washington’s will stipulated if he died before his wife Martha, the slaves he owned (as opposed to those she owned) be freed after her death. Martha ended up freeing his slaves once she realized they had a great incentive to speed up her death and thus gain their freedom. She freed them not from the goodness of her heart but in fear for her life.

We know Thomas Jefferson owned slaves, most famously Sally Hemings with whom he had a decades-long relationship as she bore him six children. Let’s be clear that there’s no such thing as a consensual relationship between slave and master. She was repeatedly raped by Thomas Jefferson although historians would never describe it that way. Many historians and Jefferson’s family members denied the lineage of Hemings children, even after DNA established it as fact. Only recently have they grudgingly acknowledged a couple of the children might have been Thomas Jefferson’s, if not his brother’s.

Abraham Lincoln is credited with freeing the slaves with the Emancipation Proclamation. He actually only freed the slaves in the Southern states that seceded from the Union. He did that for two reasons; to inflict economic pain on the South and to keep France and Britain from siding with the South against the North because of their recent aversion to slavery. Lincoln himself in the famous Lincoln/Douglas debates, did all he could to avoid being called an abolitionist and repeatedly claimed that black people were not the social equal as white people nor as intelligent. Given his druthers, he’d have sent all the slaves to Liberia or Central America and been rid of them.

There is so much white history purposefully unknown to most Americans that we truly need to dedicate a month or more to its study. We could understand why the Electoral College that gives additional power today to rural states with low population, was originally intended to protect slave states and ensure more populated ones couldn’t outlaw slavery by the weight of their numbers. We’d know the rationale for the 3/5th’s clause and about the provision of the Constitution that allowed for the ending of the International Slave Trade no sooner than 1808. That prohibition was had nothing to do with ending slavery but was about protectionism of the Domestic slave trade which led to one of the most heinous act ever perpetrated in the world, slave breeding farms.

America has spent as more time denying the existence of breeding farms than educating people about them. Led by large slave breeding farms in Richmond, VA, and the Maryland Eastern-Shore. Farms whose populations were almost exclusively black women were forced to have child after child that were ultimately shipped to Southern plantations to meet their needs. Some “benevolent” slaveowners offered the women their freedom after they bore at least 15 children. The fathers were often sent from nearby plantations although the owners felt free to sample the wares whenever they chose. The previously mentioned Thomas Jefferson knew the value of a female slave though they may have never tilled the field or harvested a crop.

I consider a woman who brings a child every two years as more profitable than the best man of the farm, what she produces is an addition to the capital, while his labors disappear in mere consumption.

Many of the laws that exist today stem from slavery or its aftermath. The Posse Comitatus Act of 1878 which prevents actions of Federal Troops on US soil was to ensure that Federal Troops never again protected the black ex-slaves in the South. Their stationing allowed for the Reconstruction Era while their removal brought Reconstruction to a swift end.

Even people that have heard of “Juneteenth” may not be aware of the entire history behind it. Yes, it reflects the date that blacks in Texas learned they were free, months after the Civil War actually ended. You won’t learn that the Federal government was complicit in the delay so that one more cotton crop could be harvested. Texas history books would seem the reasonable place to look for an accurate telling of their history but they would rather you be told a tale of “American Exceptionalism,” that suggests slavery was a labor arrangement.

The Ocoee Massacre murdered or burned out the entire black population of Ocoee, FL after two men tried to vote in the 1920 Presidential Election. There was a movie about a similar mass lynching in Rosewood, FL but you still hear almost nothing about it. During the Black Wall Street massacre, the Oklahoma National Guard bombed by air the Greenwood District of Tulsa. Aiding the hundreds of white attackers defending a white elevator operator who claimed (and later denied) she’d been raped. The Groveland Four, Emmett Till, the list goes on and on. Let’s have a White History Month because every effort is being made to sweep it under the rug.

By 1921, the Greenwood District was the wealthiest black community at the time in America. Attached is the full documentary by The History Channel in 2016. It’s 42 minutes long which may deter some from watching. Should you watch you’ll gain an understanding the history books have yet to share.

Facebook5Tweet5PinEmailShares10
wpDiscuz
0
0
Would love your thoughts, please comment.x
()
x
| Reply
Share this ArticleLike this article? Email it to a friend!
Email sent!