Get Daily Email
Join/Login CLOSE
Home / Featured Content / Why We Run #38: For Cassie (and Those Affected by Juvenile Arthritis)

Dave Porte runs to raise awareness and funds to fight Juvenile Arthritis, and for his daughter, Cassie.

The Good Men Project Sports asked why we run?

This is from Alison Tedford:

Dave Porte has been running for nine long years and for the most honorable of reasons.

He runs for, and with, his 10 year old daughter, Cassie, and for other kids like her, struggling with a disease that has no cure. Cassie has Juvenile Idiopathic Arthritis and for that reason the foundation established in her name (Cassie and Friends Society) has raised over a million dollars for research – with a large component raised by their participation in the Scotiabank Charity Challenge offered through the Scotiabank Half-Marathon and 5k. It’s happening June 26, 2016.

In September 2006, our daughter, Cassie, was a typical 20 month old girl. Until one morning when we took her out of her crib and she wouldn’t walk. Actually, couldn’t would be a better way to put it. She basically had one leg collapsing underneath her as she tried to walk. And, as she was so young, she could not really communicate with us to tell us what was wrong. All we knew was that she couldn’t or wouldn’t walk and one knee seemed to be swollen.

We rushed her to Children’s Hospital where we started on a battery of tests. Blood tests, tests for viruses, x-rays and an MRI (which would be the first of many general anesthetics she would have). Even the staff at the hospital was unsure what was going on with Cassie.

It took two weeks but finally it was determined that this was not a virus, not a blood problem, not just something wrong with the knee but she had Juvenile Arthritis. My first thought was, how can that be, she is two not 102, she is too young for Arthritis.

He talked about his fear of the unknown:

We were soon to learn that Juvenile Arthritis affects 3 in 1000 children and is one of the most common chronic childhood diseases. We didn’t know much then but over the last 8 years we have learned a lot more about Juvenile Arthritis.

But what we did know at the time was that Arthritis was affecting one knee. What would happen next–we didn’t know. Would it spread–no one knew. Would it get under control, go away, last forever, affect her eyes–unknown, unknown, unknown and unknown.

And this was the terrifying part. This great long list of unknowns for a little girl, at the time not quite two years old. A lifetime ahead of unknowns.

Cassie went through increasingly more difficult and uncomfortable treatments as her disease progressed while her family looked on until they finally landed on a treatment that worked–Enbrel. The number of affected joints went from 16 to 2 in just weeks. Cassie was participating in activities she never dreamed she could do. He described their journey as terrifying and disheartening, and finally, inspiring.

What was truly inspiring was what came next.

One night, I was online looking for a 10km run for my office staff to participate in and stumbled across a ½ marathon and 5km run occurring in June that year. The 5km was too short and there was no way I could run a ½ marathon, so I almost kept going but something about fundraising that caught my eye, so I decided to register for the run and do the 5km. I sent out an email to a few friends and family that night and thought I should be able to raise a couple of thousand dollars in the 6 or 7 weeks before the run. I put down that I would match all donations and went to bed.

The next morning there was almost $1,000 that had been pledged. Fast forward a few weeks and it was $10,000 (at which point I changed my commitment for matching donations to be the first $1000 only!) By race day $18,000 had been pledged by family, friends, staff and other business associates. I came so busy thanking people in the week before, I hardly had time to work! 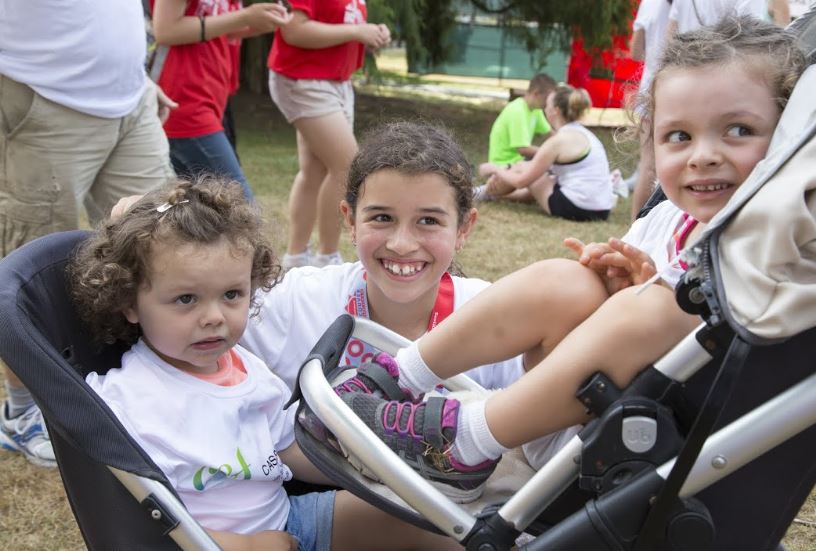 Cassie & Friends is more than just a fundraising organization – though in that regard they are nothing short of formidable. They are making a meaningful difference in the lives of kids like Cassie. Dave spoke proudly of their contribution and of his wife’s efforts in particular:

Through the amazing work of my wife Debbie, who manages to run a charity in the evenings, after saving lives as a Doctor during the day, Cassie & Friends provides a Parent’s fund at Children’s Hospital which parents of children with Juvenile Arthritis with immediate financial needs can draw upon, a Loan Cupboard – which is in the process of being stocked – from which parents and families can borrow equipment and resource materials. C&F also has a website for parents and families to access information. We host a Family Day annually for families with Children with JA and had over 200 attendees last year. As well, we have started an educational program for elementary schools using the Kids on the Block puppet presentations to teach children about JA.

Wondering how you can get involved? There are still couple weeks to help Cassie and Friends raise money with the Scotiabank Charity Challenge offered through the Scotiabank Half-Marathon and 5k. If you want to donate or sign up and join them on June 26, 2016, you can do so here using their special code “16VCASSIE”

Browse the over thirty posts we have thus far Good Men Project Sports’ Why We Run Series here.

We want to hear from you! Why do you run?

Please send us your submissions through our online submissions portal, by clicking on the link below:

Alison Tedford is a freelance writer and single mother from Abbotsford, BC, Canada. She documents her adventures in feminism, fitness, and parenting on Sparkly Shoes and Sweat Drops.