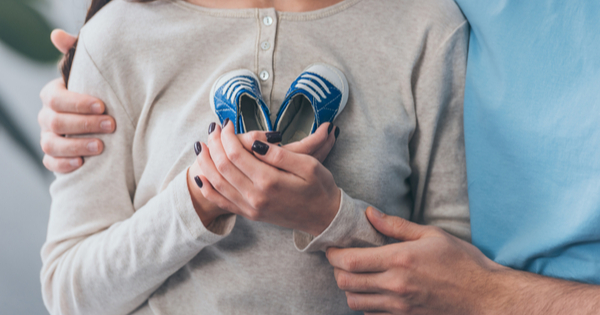 You should have seen your mother and I on the day of our first Ultrasound appointment with her OB/GYN.

In typical fashion, we were cutting it close for our appointment, and true to form, thinking we were closer to the Doctor’s Office than we actually were, I parked the car about 10 minutes away.

Your mother and I argued about how close the office was. She, of course, was right (something, if you’d come to know, was the case 90% of the time).

“Look babe, we made it just in time!” I said to your mom, as we walked through the doors of the medical office in Medford.

The minute those words left my mouth, I turned and looked up to see about 5 people in front of us in line.

The sarcastic smile she shot back at me, was one for the ages, and I just bowed my head.

After getting through the Check-In process, we made our way to the waiting room, eager with the anticipation of seeing you for the first time.

We sat down in the uncomfortable wooden chairs and waited for what felt like an hour, but was realistically only 5 minutes until the nurse called us into the Ultrasound room. She took your mother’s vital signs, everything looked good, and she left the room to get Jillian, the Nurse Practitioner who would be performing the procedure.

A few minutes later, Jillian came into the room and had your mom drink what probably felt like a gallon of water at the time, in order to fill her bladder up so they could get the best pictures of you.

Your mother chugged that water down like marathon runner at the end of a race, and soon after she finished it Jillian came back to perform the Ultrasound. She got out a bottle of cold ultrasound gel and squirted it all over your mother’s belly. After liberally coating her tummy with this goop, she grabbed the ultrasound wand and started rubbing it over her stomach in a side-to-side motion searching for the first sight of you.

“Was that the baby?” I thought to myself every time I looked up from gazing at your mother to see the monitor. I had no idea what I was looking at, or for, on the screen. Half of me was expecting to see a fully formed face staring right back at me.

After a few minutes of searching for you, Jillian said to your mom, “Let’s give it a few minutes and try again, your bladder is probably still filling up.”

No problem, after all your mom had just finished drinking all that water and sometimes it takes a second before it makes its way down to the bladder.

Five minutes later, Jillian came back in for a second attempt.

“I can see both Embryo sacks,” she was moving the ultrasound.

“Umm…did she just say BOTH?” I thought to myself. The idea of your mother and I having twins had never crossed our minds.

Try as she might though, she just couldn’t find you both in those embryo sacks.

“This happens a lot at the first Ultrasound appointment. Sometimes at 10 weeks, it can be hard to find them, so we’ll send you over to Winchester Hospital to do a transvaginal Ultrasound. They get really clear visuals from those,” she told us as she was on hold with the hospital letting them know we were heading their way.

Again, no problem, I understood. Honestly, I was just trying to wrap my head around the fact there was more than one of you, but I figured you both had my genes, so chances are you were just being difficult.

Jillian called over to Winchester Hospital to let them know we were coming but was told the Ultrasound Technicians were only there until 6 pm.

Trying to make it over to the hospital in time today would take some luck because rush hour traffic on route 93 in the Greater Boston area is horrendous.

The entire car ride over, we barely talked about the news we had just received. The conversations between your mother and I mainly revolved around hoping we’d make it to the hospital in time and making sure I didn’t miss the exit on the highway.

Of course, that’s exactly what I did, and as a result, added an extra five minutes to our already tight window.

Truthfully we were in very different mental spaces with the information we had just received from Jillian, and rather than addressing the emotions that were swirling around both of us, we tried to occupy ourselves with talking about stuff like traffic.

Your mother being a medical professional, and knowing her own body, knew that the news of two embryo sacks with no discernible heartbeats was a big problem.

I, on the other hand, being the optimist that I am, was excited. We’re going to have twins!

We made it to the hospital with 10 minutes to spare. Whew. What a stroke of luck.

I dropped your mother off at the entrance to the hospital, so she could check-in while I drove around looking for a parking spot.

Looking for that parking spot felt like forever. I hated the fact that for even a few moments I would be separated from your mother during such a momentous situation. It was during that time that the idea of everything not being ok, finally entered my mind and the gravity of it all started to finally take hold.

By the time I had found a parking spot and sprinted into the general waiting area to find your mother, she had finished the admission/check-in process and the hospital staff showed us to the next waiting room area where the ultrasound technicians would call us for her transvaginal scan.

The waiting area was cold, devoid of anything that might bring joy. The excitement your mother and I had about meeting you both, had now changed over to nervous energy.

I tried to deny how nervous I was, and stay calm, cool, and collected to help reassure your mother, but she could tell I was feeling uneasy, by how fast my knees were shaking up and down, a nervous habit I’ve had all my life that is a telltale sign I’m worried.

I’d learned how to put on a brave face a long time ago, just as many men do, but this nervous tick is something I’ve never quite conquered.

A nurse from the hospital called us into the Imaging Room and asked your mother to disrobe and change into one of the hospital gowns while she waited outside. She said she would be back in just a few minutes to perform the Transvaginal Ultrasound.

Your mother asked me to tie the backs of it for her. Thanks to the combination of my nerves and the freezing cold temperature of that hospital room, my hands did not want to cooperate with me, and doing something as simple as tying a knot, was almost impossible, try as I may.

In came the nurse, and she helped prop your mom onto the table, and into the cold stainless-steel stirrups.

She fired up the high-end Ultrasound machine they had, and after a few minutes and a bunch of strange beeps that sounded like the machine was trying to communicate, she inserted the probe.

Your mother and I searched the monitor for any site of you both.

“Holy Crap! Triplets??” I thought to myself. I had no idea how we would, or could, handle three babies at the same time, but I knew we’d make it work.

“Hmmm… I’m not seeing the flicker of their heartbeats though,” Said our nurse.

“What does that mean?” I asked. Your mother, a Nurse Practitioner as well, knew exactly what that meant.

The nurse stayed silent and never answered. I’m sure she legally couldn’t break the bad news to me, as that’s probably the responsibility of the doctor, but one look at your mother, and I also knew exactly what that meant.

To this day, I’ll never know how she was able to get through the rest of the procedure as the nurse continued to maneuver that probe inside of her searching for just the faintest sign of a heartbeat from any of you.

Your mother is the strongest woman I’ve ever known, but at that moment, I knew I needed to keep it together to help her keep her composure, so that’s what I did.

After searching and searching for what felt like hours, it was time for the nurse to give up.

All three of you were gone.

It wasn’t your fault.

I had started that morning fantasizing about all the amazing experiences I would have with my future son or daughter, from fishing trips and/or dress up games to the day you would leave us to go out into the world on your own.

By the end of the day, the entire earth had been snatched out from your mother’s and my feet.

I wanted more than anything to make sure she knew I never thought she did anything wrong because she didn’t. The doctors say that 25% of pregnancies can wind up in a miscarriage during the first trimester. I told myself, and your mother, it’s a common experience for many expecting parents, but there is nothing common about the emotions we felt from losing the three of you.

My job was to be there to support your mom through this, because as much of a whirlwind as this experience was for me, that went double for her.

I took on that duty with as much courage and strength as I could, trying to reassure everyone it was all ok. Somewhere along the way though, I took on that job in a way that allowed me to deflect my own feelings about what had happened and pretend I didn’t deserve the chance to grieve you all, because I hadn’t experienced it as deeply as your mother had.

To be crystal clear to you three, this was entirely of my own doing. I used the idea of being the big strong man with the shoulder to cry on, as a defensive mechanism so I didn’t have to deal with the raw emotions that came from losing you.

Your mom tried plenty of times to get me to talk about my feelings, but I just wasn’t ready to pick that scab open.

Whenever I’ve dealt with a difficult situation, it has always been easier for me to deflect, pretend to be ok, and immediately divert the conversation into another realm.

Your mother and I are now expecting a baby boy this fall, and as I finally start to let those dad fantasies creep back into my head, I’m also finally starting to deal with the pain that was left from losing you.

I’m finally giving myself the space to grieve you all, and while your loss is one of the more painful events in my life, you also gave me one of the greatest gifts you could ever give a dad. The ability to experience and process my emotions instead of pretending I don’t have them.

For as devastated as I am over losing you, I’m eternally grateful.

I never knew you, but I loved you all the same.

Robert Aguero-Hoffman is a loving husband, father, host of “The Healthy Parent Podcast”, and the owner of the Fitness Studio Lift Positive Fitness located in Beverly, MA.

FacebookTweetPinEmailShares285
wpDiscuz
0
0
Would love your thoughts, please comment.x
()
x
| Reply
Share this ArticleLike this article? Email it to a friend!
Email sent!