Get Daily Email
Join/Login CLOSE
Home / Good Feed Blog / Times Change, Hate Loses to Love, and Students Protect One of Their Own 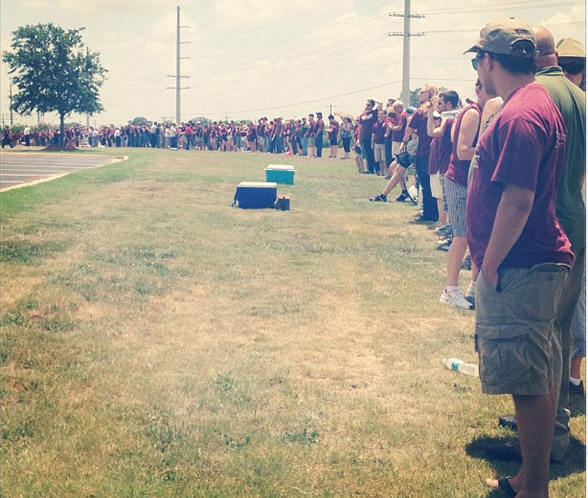 There are many signs of seismic cultural shifts, writes Eirik Rogers, the most recent being the symbolism of Texas A&M Students vs. The Westboro Baptist Church at Lt. Col. Roy Tisdale’s Funeral.

Driving through Northern California’s Redwood Park in the middle of the night, I was warned repeatedly about wild elk by signs and radio messages, admonished not to get out of the car if I were to hit one of these massive animals. An injured elk is far more likely to charge someone. I am struck by the metaphorical overtones of that hypothetical situation; as same sex marriage gains in popular support and the voices of dissent are increasingly ignored, the rhetoric escalates to something sounding downright dangerous, reflecting the desperate dying gasps of an old and outdated dogma.

The Westboro Baptist Church may not be the biggest animal in the religious herd, but they are certainly among the loudest. They make a point of attending funerals of our service men, preaching not from love, but from hate, the rhetoric crawling out of the dung pile of odious thoughts like maggots. It is said that Jesus Christ Himself, who walked among the sinners, eloquently said, “Above all, love each other deeply, because love covers over a multitude of sins.” Would He embrace such mindless mantras as “God hates fags,” “Thank God for dead soldiers,” “We preach hate because the bible preaches hate,” and “A fag is a Jew, pretty much”?  It is not easy to imagine he would.

Lt. Col. Roy Tisdale, a veteran of the wars in Iraq and Afghanistan, gave the last full measure, and ultimately died defending – among other freedoms – the first amendment right of the Westboro gang to picket his funeral. Ostensibly, the church maintains he died defending “the fag lifestyle” of the nation. I suspect that after reading this, most of us will remember the name “Westboro Baptist Church” but not the name of Lt. Col Roy Tisdale.

But for now, the real story belongs to the Aggies – the students at Tisdale’s alma mater, Texas A&M. Wearing the school color, they formed a maroon chain of over 600 students to protect the sanctity of Tisdale’s memorial service. The Westboro church, which cannot even fill its own pews, never showed up. The silence of those who stood by their fellow alumnus and hero took the last word. Love spoke the loudest.

Eirik Rogers grew up in upstate New York's lake-effect snow belt south of Lake Ontario, and thawed out in southern California. He embarked on eight years of undergraduate and graduate science education, but realized a greater passion for writing. Along the lines of what Maya Angelou calls the "melody" of the English language, he uses words to express deeper truths on a variety of human interest topics. Eirik currently lives in a quiet river town with a spouse that - until recently - his state of residence would not allow him to marry, and two cats that the state seems to be OK with.

Oh, yeah. The Aggies are the hardest-assed corps of cadets in the entire ROTC program.
This is their idea of a day’s work. Always has been.
Isn’t anybody here paying attention?

Problem with the headline. This is the sort of thing that’s been done for approximately five thousand years.
No seismic shift, just because it came to the attention of the sillyvilians.
Gay, one way or another, had nothing to do with it.

It was a touching story. I was drawn by the title.