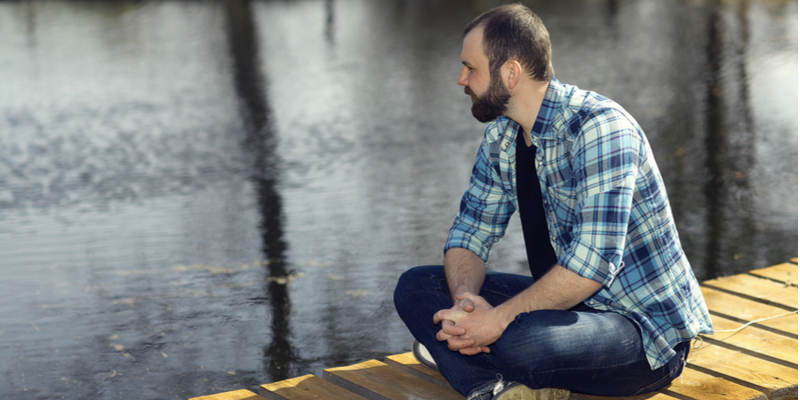 That Sunday was truly a Chamber of Commerce afternoon. If I remember, the temperature was in the upper 60s. A few wispy clouds hung out high in the sky. It was truly a stunning day.

My Dad and I were out on our boat enjoying some bass fishing. I’d turn 15 in two weeks. I don’t think I caught jack squat, but mostly, I was just happy to be hanging out with my Dad.

Around 1:30 or so that afternoon I felt a feeling I’ll never forget as long as I live.

Every muscle in my body just went limp. I almost dropped the rod and reel in the lake. Along with the limpness, there was a tightness in my chest. Like I couldn’t catch my breath. Then a couple of moments later, I felt a heaviness that was completely surreal.

“Ryan, you okay?” My Dad picked up on it. I don’t know if I answered his question. Maybe a minute or two later, I felt like myself again.

Flash forward to later that night when the phone rang. I was hungry and Mom made lasagna that night. And she made a killer lasagna!

Soon after the phone rang, I heard a sound that just rocked me to my core. And it still rocks my world some 28 years later.

“NO! NO! NO! I’m an orphan! I’m an orphan!” My Mom was completely beside herself. I was in my room with the door closed as was my wont and I could immediately feel something was bad wrong. But I didn’t dare check it out. The energy felt heavy and dangerous, and I didn’t want any part of it.

A few minutes later, I hear a knock on the door. It was my Dad. All the color had left his face and he’d been crying.

“Can I come in?” He asks with a shaky and thin voice. He was about to tell me that my Granddaddy – to this day my greatest hero – was found dead in a field near his house. He’d gone to chase away some people who were fishing on his property. While he never had an autopsy, authorities believed that he had a massive heart attack. He was 75. And I thought he was bulletproof.

An Army veteran, Melborn Ivey was awarded the Purple Heart after he was wounded during the Battle of Guadalcanal. He went on to become immensely successful in agriculture and real estate. He introduced me to the majesty of Crimson Tide football. And he was also the finest storyteller I ever knew and is the reason I became a writer.

Here’s the punchline to this story. And almost 30 years later it still gives me chills in places I didn’t know I had.

Authorities believed that he died around 1:30 that afternoon. He died around the time I felt that otherworldly feeling hit me out on the Holt Lake reservoir on the Black Warrior River.

I will go to my grave believing that I felt my Grandfather die.

I’m what psychologists – and, y’know, I – call a highly sensitive person. I’ve always been like this, but I’ve denied it for most of my life.

I also have a gift to be able to put people at ease just by my being there. I can’t explain it. The energy in a room can change as soon as I walk in.

Admittedly, growing up as a highly sensitive person – especially as a male – it was a bit of an awkward burden to carry.

I have gotten very good at stuffing emotion down where I thought it belonged. I stuffed it down to places nobody dared to tread.

This kind of stuff manifests itself in not so good ways. It manifests itself in weight gain (I’ve always been heavy,) and health problems (ever had a ruptured gallbladder?) I was also on high blood pressure medication from a very early age – I think I was 18 or 19.

Growing up with high sensitivity, I developed many masks to hide my true self.

I could go on and on. But I think you get the point. Society generally doesn’t see highly sensitive men as “manly” …whatever the hell that means.

I believe I was in fifth grade when this happened. Our class took a field trip to the Bama Theatre to see a matinee showing of a play. (Culture in school? Yeah, I just dated myself.)

I was just glued to the stage. I loved what I saw and couldn’t get enough.

If I went to a ballgame or concert, I’d be glued to what I was watching. But when the time came to leave, I need to get the hell out of there.

If I go into NYC, I usually have to keep my headphones if I’m alone. And don’t even get me started on subway cars. That’s really a way to get overstimulated.

I share all this because only recently have I started to see this part of myself as a superpower. I’m sensitive. This is amazing! Not many men in this day and age are as in touch with their feelings as I am.

I’m an empath. I can pick up on the energy in a room better than many men can.

I’ve parlayed this into a career as an author and a burgeoning business as a life coach.

All because I am as sensitive as I am.

So next week, we’re going to take a look at what you can do as a highly sensitive and empathic man to help you dial into your own superpower.

Because make no mistake, as soon as you own it, your sensitivity becomes your superpower.