Get Daily Email
Join/Login CLOSE
Home / Advice & Confessions / How Do You Make Friends As An Adult? Part 1 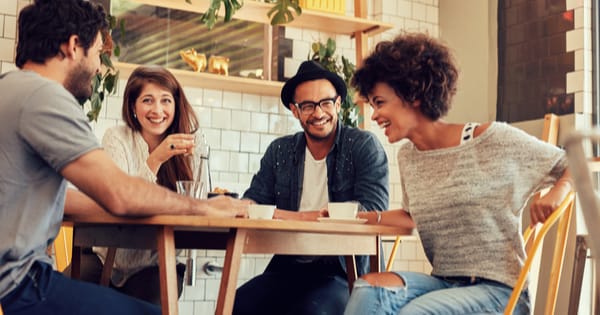 The night before my first day of kindergarten I asked my mom how I was going to make friends at my new school. Here instructions were simple. Go up to somebody I wanted to be friends with and say “Hi, my name is Rich, what’s yours?”

It seemed easy enough. So on the first day of kindergarten, as all the kids were getting settled before the first bell rang, I looked for somebody I wanted to be friends with. I saw a table where four girls were sitting and talking. I walked up to them and said: “Hi, my name is Rich, what’s yours?”

Silence. No hello. No wave. Just four girls I didn’t know staring at me like I was an alien. Eventually, I just walked away. Making friends was going to be harder than I thought.

Looking back at the friends I have known since elementary or high school, I am unable to recall their origin. For some, they were just always there. As much a part of my life as my oldest memories. Other friends, there is a clear time before and after, but the initial encounter itself has been forgotten. Often times I gradually saw somebody more and more until they were a part of the fabric of my life. They were a given.

The friendships with the clearest beginnings are those that happened after college. Outside the crucible of the educational setting, my life became a lot more linear, and if not defined than at least specific.

I remember the friend I met at work because I was hated my job and would stop her desk any chance I could to chat. The friend I met in a writing group because he and I were part of the few who wanted to go out for drinks afterward. The friend who emailed after my first play and offered to help on future projects.

These beginnings were so much more auspicious because the deliberate meeting of friends, the commencement of a relationship, the active investment in another human being is so infrequent as we get older.

Yes, we encounter people regularly. At work, at social gatherings. We are bumping into people all the time, metaphorically and literally. How many of those people do we stop and consciously think; I should like to bump into you again.

Sure we say we may suggest the idea, but we don’t act on it. Observing the way people part from they almost always something to the effect of. “We should get together soon” or “Let’s get something on the calendar” as they walk away without making plans.

Meeting people is easy. Making friends is hard. So how do you meet the people you want to make friends with? People who also want to be friends with you. Where are they?

I belonged to a “social club” in New York City for a few years. Billed as a social university for busy professionals, it would host screenings, gallery viewings, and cultural events, stuffing hundreds of successful urbanites into event spaces and plying them with free booze. While the content of the events was often interesting, I found myself struggling to connect with the people there.

Almost everybody I met admitted to wanting more of a social life, but almost nobody seemed clear on what that meant. It wasn’t the blank silent stare of kindergarten but it also wasn’t that far removed. Those conversations were cordial enough but yet stripped of the kind of magnetism and energy that elevates pulses and connects people.

As my interest in that organization waned, I thought about all the ways people had previously found community. Clubs. Volunteerism. Sports. Church. But the clubs I had joined had been fruitless. The volunteerism I had done was much more transactional with few recurring faces. The sports I had played were far too competitive. And Church? Well, it wasn’t for me.

As we live through this age of glorified self-classification I couldn’t help but wonder if I was an awkward introvert trying to pretend I was something I’m not. While I would have readily classified myself as an extrovert when I was younger, I no longer identified as such. Neither intra nor extra, I felt myself to be… just a vert.

I had a hard time believing there weren’t other people in my city of millions who were just looking for a simple, human connection. It felt arrogant to believe others had forgotten how to pursue it, but I think, to some degree, we all had.

Gradually I stopped trying as hard to entertain new people I met. Tired of wasting time not getting to the heart of what matters. I stopped asking how they were doing and started asking what the worst part of their week was. I thought I was just finding a more interesting way to engage, but I was just looking for something real. Something outside of the five default phrases we say when we ask how we are doing. Something that required thought and honesty and maybe even vulnerability.

It resulted in fascinating interactions. Big-eyed excitement as well as death stares from people who thought I was some sort of transient life coach wandering into bars looking for clients. I was onto the very beginnings of something.

But still, it was not a panacea for the difficulty of friend finding.

The quest for friendship was something I found myself focusing on more when I was single. Emerging from a relationship felt like returning from a sabbatical. No longer able to rely on my romantic partner I was constantly jarred into a reality of fewer deep connections than I would have hoped for. It is not unique to say the loneliness we experience as single adults can quickly and easily be at least temporarily satiated through dating. The novelty, the diversity, it helps to distract from what we are perhaps truly looking for.

It worked for me for a short time. Dating quickly becomes routine, familiar, and more an expedition to understand as much about the other person as quickly as possible so you can decide whether or not they are worth your time. It is exhausting and not the least bit anxiety-inducing.

Though, it was around this time when I was beginning to tire of dating that my world changed. It was at this point in my life when I met my hunny.