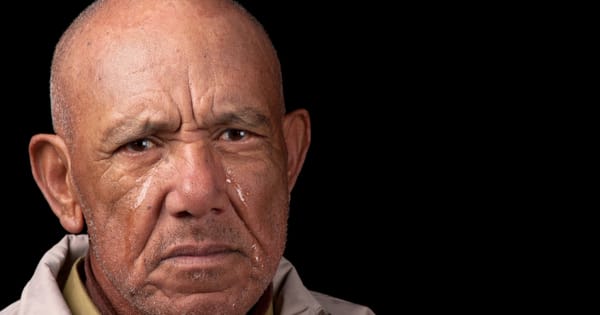 I recently completed a remarkable book that has changed how I see myself as a man. Before I talk about that, I want to take a look at something that happened very early in my relationship with my former coach.

Yeah, I was wrong.

During one of my earliest calls with Lisa, I found myself getting emotional about something. But I tried like h*ll not to show it.

Lisa is no dummy. She saw through me like a sheet of plastic wrap.

“Why not let yourself feel whatever’s coming up?” She eventually asked me.

“And hand you my man card on a silver platter? No thank you.”

I have always been a passionate and an emotional guy – I AM a Pisces after all. But I couldn’t allow myself to share my real feelings or emotions.

“Men don’t cry and we d*mn sure don’t cry in front of women.”

But not only did I believe this, but I was self-righteous about it!

I was lashing out at people who were only trying to help. I was diving deeper and deeper into self-hatred.

I was wearing people slap out.

I was in an emotional prison.

This is why Cry Like a Man: Fighting for Freedom from Emotional Incarceration, the remarkable new memoir by Jason Wilson, was so very impactful.

Wilson is a lifelong Detroiter. A product of a broken home with lots of uncertainty, he learned at an early age how to mask his emotions lest he get ragged on and roasted by his buddies. He’s seen way more than his fair share of heartbreak and tragedy, and he got very good at hiding and disguising how he really felt.

One of the most heartbreaking parts about being a man is the idea that we can’t share how we feel. We can’t have those conversations about beauty and feelings without being seen as soft or feminine, or…God forbid…Gay.

You know what happens when men hide their emotions? We become sick. We become addicted to drugs or alcohol. We lash out and abuse the women and children in our lives. Or we end up becoming unfortunate statistics. More men are killing themselves than ever before and it really doesn’t need to be like that.

One of my greatest heroes was my grandfather. He’s why I became a writer. He was my first companion at the Church of the Crimson Tide all the way back in 1984 at Birmingham’s Legion Field. He was a Purple Heart recipient. He was a member of the Greatest Generation. He truly is my greatest hero.

My grandmother passed away from a stroke back in 1983. She was but – I think – 59. She was the love of Granddaddy’s life and he was absolutely devastated.

My mom told this story, and it shatters my heart to this day.

Mom, Uncle Eddie, Aunt Joy, and my grandfather got home from the hospital very late one night after Grandmamma had her stroke. She was still on life support, but I believe she died maybe a day or two later. There wasn’t much hope, and everybody knew it.

Not a word was said in the car ride home. You could cut the tension in the car with a razor blade.

I never saw Granddaddy drink alcohol. He wasn’t a teetotaler, but he didn’t drink often. He never did it in front of his grandchildren.

Granddaddy went into the kitchen and poured a drink. He goes into his bedroom and quietly closes the door. A few moments later, he does something that shatters everyone.

“He lets out this scream like I’ve never heard before. It broke my heart all over again,” Mom said.

Here was a giant of a man. He had charisma. He once met President Reagan. He was highly successful in real estate and in agriculture.

And when men can’t allow themselves to cry, we wind up lashing out in dangerous ways.

In Wilson’s book (which I can’t recommend highly enough) he shares a time when he and his wife were going through a rough time. They wanted to expand their family, but complications arose. This drove a wedge between Wilson and his wife.

He shares when he allowed himself to cry in front of his wife about what was going on, this allowed his relationship to grow and flourish in ways he couldn’t have imagined before.

He dropped his mask, and he’s a far richer man for it. And his marriage is incredibly healthy despite the complications.

As I wrote about last week, I’m going through some pretty scary times in my life. Nothing has changed in that regard since last we met. I see glimpses of hope, but it’s still scary.

He also would’ve ended up in the hospital with a health problem. Like another kidney stone maybe.

I allowed myself to feel all the feelings coming up in my space. I reached out to some people in my life. I allowed myself to get emotional. And I’m far more capable to come through this more powerfully and more purposely because of it.

Case in point on the former, the mere fact that ten years ago my gallbladder ruptured and almost killed me because I couldn’t be with the emotions of losing my Mom, this is proof positive how dangerous bottling emotions can be.

Men, please listen to me. When you feel emotions, let yourself experience them. Cry like a man, it just may save your life.

And read that book! C’mon y’all!

END_OF_DOCUMENT_TOKEN_TO_BE_REPLACED

Facebook73TweetPin1Email1Shares75
wpDiscuz
Share this ArticleLike this article? Email it to a friend!
Email sent!