“What?” I jolted. “Thought I heard something stalking around our camp last night.”

“We’re stalking in the leopard’s camp,” he corrected me.

It was early, a touch on the freezing side of life in the Aberdares, a moorland covered national park about three hours north-east of Nairobi, bordering the Great Rift Valley.

The six of us – Tom, Daniel, myself, Jeremy and our well-trained climbing guides from African Ascents, Julian and Tom – were in the Dragon’s Teeth, a sporadically spread of jagged rocks that rise above the consistently wet moorlands.

“We had ice on the tent last week,” Tom had told me which prompted me to bring every layer of clothing I had.

I travelled with Jeremy, a Welsh-born-now-living-in-Kenya businessman to this remote, middle-of-nowhere location to train for our ascent of Mt Kenya’s second highest peak, Nelion – a technical climb that involved harnesses, helmets, chalk bags, ropes, nuts, camelots, slings, rock-climbing shoes, a lapse of sanity, physical and mental strength to endure not only the freezing weather on the equator but also the climb itself.

We arrived around lunchtime under a grey-covered day as we hiked through the moorlands, stepping around the giant groundsel plants which, unlike myself, are resistant to frostbite.

Having come directly from sea level to 3,800 feet in the space of 24 hours, time to acclimatize might have been a good idea. Climbing craggy rock faces with numb toes and finger tips wasn’t, as the first two climbs had me realise two things:

I hate the cold and perhaps I should have mentioned beforehand that I have an inverted fear of heights called, Anablephobia. The origin of the word, ‘ana’ is Greek for up, ble is Latin (meaning result of the act of) and phobia is Greek for fear. Basically, I can’t look up at anything over nine feet. It terrifies me for unknown reasons.

I blindly searched with my numb fingers for grips as my legs stretched out in yoga-like bends to hold onto anything remotely sticking out, relying heavily on the grip of my rock-climbing shoes.

Our third climb for the day was the toughest due to the challenge of not having many holds. Thoughts of, What the hell are you doing? You can’t even do this 20-meter climb and you expect to summit the second highest peak in Africa? tried to deter me.

I told my subconscious to shove off and resumed the climb, finally hi-fiving Tom and Jeremy at the top. We abseiled down the other side and made for camp where I rugged up in nine layers and put my boots and only pair of thin socks by the fire to dry.

During the night I was stirred awake by the sound of scratching around our tent – probably the leopard that had left a fresh pile of faeces.

After breakfast we tackled a 65-meter rock, a very enjoyable route 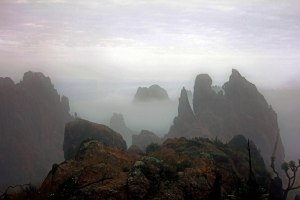 named Alex’s Incisor. The view from the top had us spot a dik-dik (smallest species of antelope) galloping across the moorland. I watched behind it to see if perhaps a leopard was on its tail but it seemed to be out for its morning jog.

At the peak we could see the Rift Valley before we abseiled back down for lunch, a 7-K hike back to the car and warmer weather.