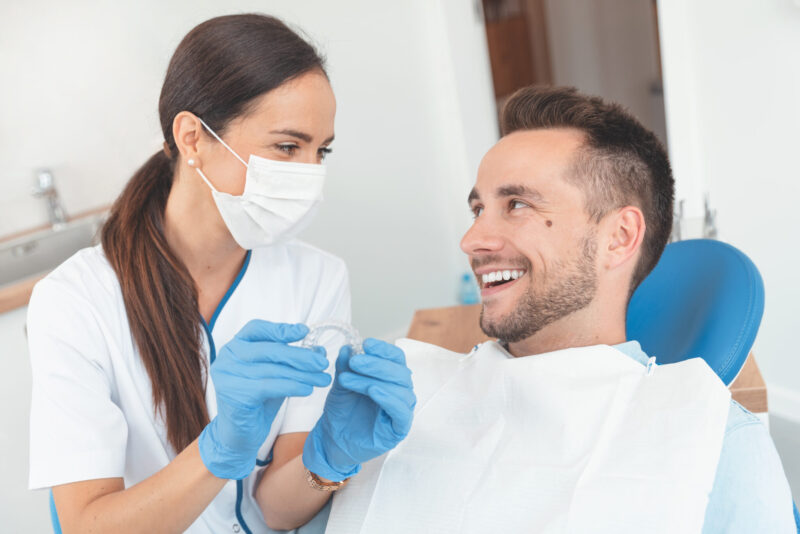 Often being advocated as “invisible braces”, Invisalign is a renowned product with a commanding market lead among its peers of clear aligners. A look at the growth of Invisalign-producer Align tech says it all – best-performing stock of the S&P 500 (2017), which represents the 500 biggest US companies by market value. Literally, everybody knows somebody who had it and who doesn’t secretly or openly crave for perfectly straight teeth without the inconvenience of wearing fixed braces?

But is the hype really justified? Can Invisalign really replace braces altogether – for everyone, regardless of the nature of the tooth positioning issue at hand?

In the following, we want to give an understandable comparison to braces and work out some of the important advantages and disadvantages you need to know before making a decision.

Let’s start with the comparison. Both approaches seek to perfectly align the teeth and are scientifically proven. To understand the differences, one has to take soft factors, like patients’ comfort, convenience and esthetic needs in our modern society into account. It is these categories, which became more and more relevant for the long-neglected group of adult patients in recent years. Modern lifestyle, is widely associated with health, esthetics, comfort and convenience and these trends apparently don’t stop at the doorsteps of medicine and dentistry.

As implied in the name Invisalign, the aligners are barely visible for the outside world, which especially for a considerable proportion of the main interest group of working grown-ups, easily is the most important decision-making factor. Braces, on the other hand, are always visible, even though some newer bracket systems try to tackle this disadvantage by being made out of tooth-colored ceramics. But the wires between the brackets are still made of metal and therefore still visible. In modern days, with people taking increased care of their visual perception by others, this esthetic disadvantage of conventional braces is losing acceptance at every level of society and especially among adults.

In terms of treatment time for the majority of cases, Invisalign narrowly edges out braces with an average of 6 to 18 months as compared to the usual 1.5 to 2 years in brace therapy.

In regards to pricing, it depends on the severity of the case and – especially for brace therapy – can vary considerably from one practitioner to the other. But in most comparable case scenarios, the prices are quite similar and payment in installments is very common for both treatment options, given the duration of the procedure and the significant costs involved.

Another very important issue is comfort. In this point patients almost unanimously prefer Invisalign over braces, mainly because the latter frequently causes blisters on the cheek which is due to friction from the brackets and wires. In the same category Invisalign also avoids the typical problem of food getting stuck within the braces. While Invisalign also requires proper oral hygiene (patients need to brush after each meal to avoid staining), braces require significantly more attention because of the mentioned food impaction. If a patient fails to manage his or her oral hygiene, we are at times forced to remove the braces altogether to avoid and treat dental caries or gum infections.

From the orthodontist’s perspective, there are still some important advantages for the traditional brace treatment. Especially patients with poor compliance might forget to wear their aligners or even lose them. In both cases, achieving good results can get quite complicated. This, of course, isn’t possible with braces. They aren’t removable, so the patient can’t possibly do anything wrong.

Invisalign developed very fast in recent years and showed more and more capabilities to treat even some of the most complex orthodontic issues with great success. According to a growing number of orthodontists, Invisalign even displays some advantages over braces when it comes to treating vertical issues like open or deep bites. Most practitioners still prefer traditional braces for closing bigger gaps in the lower back jaw. Some practitioners also prefer them for solving rotations of single teeth.

Overall, it must be stated, that Invisalign and other clear aligner systems seem to become more and more important to both patients and practitioners and the trend is so far only accelerating.

It is important to know that Invisalign and other clear aligner systems are also offered by non-specialist general practitioners. Most of them have acquired licenses for certain systems of clear aligners, but this alone isn’t a sufficient quality seal in the eyes of a growing number of patients. Clear aligner systems like Invisalign are often misconceived as simple, straightforward treatment. In most cases it is, but any rotated tooth or more complex issue needs a sophisticated decision making progress. This makes the selection of a trusted practitioner very important. In more complex cases, patients should also consult with their trusted orthodontists.

To put it all together, both systems work similarly with the end goal of ideal alignment. Moreover, they also work in similar case scenarios, with a few rather seldom exceptions, when big tooth gaps in the lower back jaw or severe tooth rotations demand a traditional approach with braces as the better option. Apart from these exceptions, the choice is up to the patient and both treatments deliver very good and predictable results in most cases, if performed by an experienced practitioner. It is the author’s conviction, that clear aligner systems, spearheaded by Invisalign, which continues to dominate the market, will never fully replace the traditional brace therapy for some case scenarios. It must be noted though, that considerable research with aligners led to modified treatment approaches that already solve more complex tooth alignment issues than most practitioners ever expected.

This content is brought to you by Dr. Dominique Laatz MSc.

Dr. Dominique Laatz MSc. MSc. is a well known dentist from Germany, who studied dentisty at the Albert-Ludwigs-University in Freiburg, Germany. He then specialized in Oral Surgery and received a Masters degree in Periodontology and Implantology. Since 2017, he practices in the German Dental & Dermatology Center in Doha, Qatar.