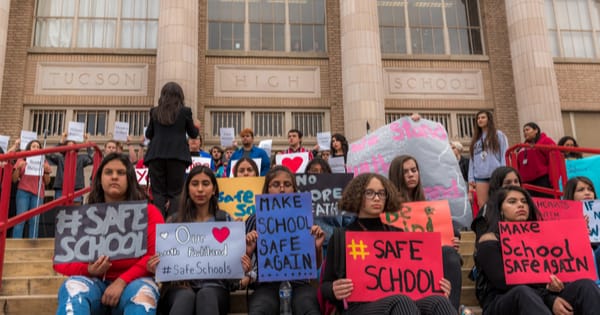 I never thought this would be my life’s work. But writing and speaking about the connections between domestic and dating violence and mass shootings has become an absurd and sickeningly frequent part of my life. Here we go again.

The massacre at Marjorie Stoneman Douglas High School in Parkland, Florida, just 20 minutes from where I live, was yet another horrific reminder of the failure of the United States to do right by our children. We legally compel them to go to school but can’t seem to keep them safe when they are there. Although addressing guns, mental health, and school security is vital, one thing I haven’t seen promoted is the importance of teaching young people about dating violence and healthy relationships. Yet, as is so often the case, this school shooter had been abusive to his former girlfriend and to his mother—a huge red flag that more violence is to come.

Nikolas Cruz reportedly abused his girlfriend, and when she broke up with him and began dating someone else, he physically attacked her new boyfriend and threatened on Instagram to kill him. Cruz sent a photo of his gun collections and wrote, “You f—ing c— stole my ex you c—. “I am going to f—ing kill you… I am going to watch ypu bleed [sic].” Police reports also show that Cruz abused his late mother, hitting her with part of a vacuum cleaner and calling her a “useless bitch.” Although he was never arrested or charged with any offense, police responded to 36 calls to his family’s home between 2010 and 2016, with child/elderly abuse and domestic disturbance among the most frequently occurring. His mother told police that he was often violent, that he threatened her, called her names, hit her, punched a hole in the wall, and routinely threw things around the room.

Cruz is far from the only mass shooter with abuse in his past. The link is clear: of 20 mass shootings in 2018 identified by ABCNews, using the FBI’s criteria for a mass shooting, ten involved domestic violence. Stephen Paddock, who killed 58 people in Las Vegas, was known to verbally abuse his girlfriend in public. Elliot Rodger, who killed seven people near the campus of UC Santa Barbara in 2014, targeted a sorority and claimed he was waging a war on women. These are just a few examples.

School shootings often follow a breakup or rejection by a desired dating partner. At least 12 school shootings involved male perpetrators who specifically targeted girls who had broken up with them or rejected them. These include infamous shooters from the 1990s: Luke Woodham, Michael Carneal, Evan Ramsey, Mitchell Johnson and Andrew Golden, Andrew Wurst, Kip Kinkel, Dylan Klebold and Eric Harris, and TJ Solomon, among others. In each case the boys had previously threatened or acted aggressively toward the girls, yet school officials either did not recognize the red flags or chose to ignore them.

Approximately one-quarter of all women in the U.S. have experienced physical violence by a partner, and 21 percent of high school girls report suffering physical or sexual violence from someone they were dating. Some 1.5 million high school students experience physical abuse by a dating partner, and 35 percent of 10th grade students report physical or verbal abuse. The CDC has found that this is the most frequently occurring type of violence experienced by youth in the U.S.

In 2010, Florida enacted Florida Statute 1006.148, which requires that district school boards adopt and implement a dating violence and abuse policy and provide training to teachers, faculty, staff, and administrators as well as include the topic in comprehensive health education curricula for students in grades seven through 12.

I do not know whether it was offered at Marjorie Stoneman Douglas, but I know many schools in Florida are not doing so. I have spoken to many high school groups and “no” is the resounding response when I ask about whether they have received such education. Perhaps because the law includes dating violence education as part of health education, which is not a required course but rather an elective. Or maybe, as the previously mentioned study found, principals rated dating violence as a minor issue.

While we discuss what to do so that no more kids are mowed down at their schools, please let us consider actually teaching youth about dating violence, healthy relationships, and how to handle rejection and breakups.

Facebook24Tweet5PinEmailShares29
wpDiscuz
Share this ArticleLike this article? Email it to a friend!
Email sent!