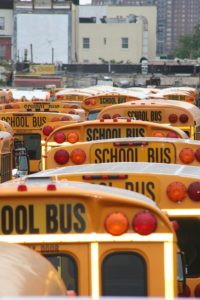 The year was 1975. I was teaching in an upper middle-class NY suburb. It was also home to many working-class and poor families as well. Of the district’s 13 elementary schools, mine was the only neighborhood one. All our kids walked, and the teachers made frequent home visits.

Every student in our district had access to the same learning materials, quality of teachers and special services. It didn’t matter where they lived. Were some schools “better” than others? Probably not. It was more what teacher a student had that made the most difference. And, like any district, all the schools had some great, mediocre and not-so-effective teachers.

ENTER THE U.S. DEPARTMENT OF EDUCATION

As a result of a D.O.E. notification I chose after school to drive one of my 4th graders — a youngster from Haiti — to an elementary school about five miles away. We were making this trip because our school was being closed the following semester and Jean (not his real name) was going to be bused to this educational institution.

There were schools closer to where Jean lived, but he wouldn’t be attending one of them. He was black and was needed to fill a quota.

The D.O.E. had informed the district that our school was home to 25% children of color and the district-wide average was 12%.

This wasn’t Alabama or Tennessee or Arkansas. This was a suburb 35 minutes from New York City. While busing was absolutely needed in many areas across the country, this was not one of them. As a result, though not forced by the D.O.E., our school system decided to heed the notification and to disperse students of color to different schools to ensure each had an equal percentage of minority students. They were people of conscience, though in retrospect perhaps misguided.

I brought Jean into the school and introduced him to one of my former colleagues. I wanted him to know someone at this new school where he would be one of seven black children. None of his friends were attending. They were spread out to various of the other 12 schools in the district. This was to be his scholastic home until he entered junior high.

Were we doing him a favor? You be the judge.

I had a close friend with a PhD in student rights who worked for the U.S. Commissioner of Education.
I discussed the situation with him, and his response was that the government didn’t have the manpower or money to know which school districts were on the side of the angels and which were not. Consequently, the D.O.E. made blanket declarations, statements and/or rulings to protect students like Senator Kamala Harris whose district was perhaps not as enlightened as ours.

I suppose one could make a case for the decision saying it was for the better good. Perhaps my district was a lone exception. However, government edicts and suggestions that unintentionally hurt students rarely operate in a vacuum. You can be certain if they harm students in one district, it won’t be an isolated case.

THE NEXT BIT OF D.O.E. CRAZINESS

Fast forward to 1977. I was an Administrative Intern at an inner-city school in Connecticut.
Our school’s English-Spanish bilingual program was award winning and recognized by the state for its innovation and effectiveness.

Students were grouped for instruction as follows: K-1, 2-3 and 4-5. Many of them were bused from surrounding neighborhoods so they could participate in this superior program. Sounds great, right?

Here’s the rest of the story.

In early 1978 the government informed the school system that our school’s 65% Hispanic population was higher than the district average of 25%. Consequently, in its effort to ensure quality education for all, we should only have a 25% Hispanic student body.

How did this play out?

K-1 bilingual students stayed at our school. Grades 2-3 were shipped to a different school and yet another school for grades 4-5.

Imagine you were a parent with a 1st, 3rd and 5th grader. Not an uncommon scenario. You now had 3 different schools to deal with. The benefit of staying in one school throughout the elementary years was lost. Siblings were separated. The opportunity to make and sustain lasting friendships was dealt a deadly blow.

It’s hard for students to leave friends and difficult to start over in a new school. In fact, the result was basically a form of forced segregation as the only students a child had continuity of contact with were fellow Hispanics in the bilingual program.

These kids became scholastic nomads as they changed schools every two years.

Was this helping these students? What do you think?

I mentioned the examples above because they are the ones where I personally experienced the harm done to students when the U.S. Department of Education for the right reasons takes the wrong actions.

During the first round of Democratic presidential debates Joe Biden took a lot of political flak for his busing position of almost 50 years ago.

I don’t agree with him when he said that school decisions should be made at the local level. Let’s face it, white privilege, racism, sexism and all the other negative ‘-isms’ need to be addressed appropriately. The federal government has an important role to play.

That being said, I believe Biden’s position was partially correct. All decisions should not be made at the national level. We need to find a way to protect students’ at-risk rights while not trampling on those of other students. My own district; one offering an equal education for all chose to follow the government’s observations without being forced. So too did Senator Harris’ districts. Many did not. They needed the intervention.

I’m sure Senator Harris was sincere in her emotional response to Vice-President Biden. But, did she have all the facts? Is she aware of situations like the ones I mentioned? Perhaps her relative youth is a hindrance rather than help to her election goals.

Deep experience like that of Joe Biden or Bernie Sanders brings a greater knowledge and perspective of the antecedents of certain issues — whether you agree with their positions or not.

Politicians, especially those running for high office, need to understand all the nuances before they attack an opponent. And we must learn to dig a bit deeper into hot-button issues. Things aren’t always as they seem or are portrayed.

Progressives particularly must be on point if we are going to prevail in 2020!

Let’s make sure when we speak or denounce the position of opponents on our side of the aisle we do so accurately and with a full comprehension of the history and context of issues.

Also, let’s carefully evaluate before we act and take positions when we don’t know all the facts.
We must make certain that we speak not only with emotion and conviction, but with fairness and positions that are informed with steel-trap accuracy.

Personally, I support Bernie Sanders! He was given a raw deal by the D.N.C. in 2016. Let’s make sure that we are fair to all the Democratic candidates and don’t engage in knee-jerk reactions and accusations without possessing all the relevant information!

It makes us look weak and gives the other side ammunition!

One thing for sure, we must beat Donald Trump, or any Republican sycophants should they choose to run in 2020. The future of America, the world and our children’s safety are at risk!