Kenny Bodanis covered the Paralympic Games, and sees in them a manifestation of the Olympic spirit well beyond the “normal” Olympics.

I am 10 days removed from my role as part of the media pool covering the Paralympic Games in London.
Our pool was not only a shallow one relative to the ocean of coverage which swelled around the London 2012 Olympic Games, it was a puddle.
What a shame.

I was as ignorant as most of my contemporaries in regard to the Paralympics. I imagined – relative to the games in July – somewhat interesting, smaller-scale, less-impressive athletic competitions put on display for more intimate gatherings of competitors’ families and friends, as well as some die-hard fans.
What a gross and insulting misjudgement.

Dictionary.com defines ‘Para’ as : “at or to one side of; beside; side by side”.

The Paralympics stands to no-one’s side. They are no more ‘Para’ to the Olympic Games than the July Games were ‘Para’ to what followed two weeks later.
Same starting blocks.
Same track.
Same pool.
Same weights.
Same hours of training.
Same lifetimes of devotion.

Where these two events differ is in regard to reward and recognition. 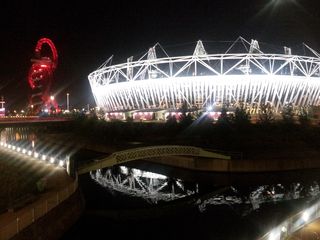 During the Paralympics, I was in the International Broadcast Centre washing my hands at a sink adjacent to one being used by a world-record holder.
He was unaccompanied by security, left alone by the public, and barely recognized by everyone except media members from his home country. He wore no sponsored clothing, no gold jewellery, and no studded watch.
I doubt Usain Bolt ever used the washroom at the IBC.
For this Paralympian, the finish line symbolized what it had at the very first international meeting of athletes generations ago: the culmination of his effort, sweat, pain, time away from his family, and validation that he is among the best athletes in the world.

For any human being, becoming an elite member of any field requires first that one overcome the wave of public opinion reminding you the odds are stacked against you. Acting? Athletics? Music? Art? Writing? Better have something to fall back on, lest you find yourself waiting tables.
Paralympians are not only – like writers and actors – told they have little chance of being among the most accomplished in their field; they are also reminded daily of popular opinion which ignorantly spews statements like: “people with disabilities shouldn’t be in a swimming pool in the first place, unless it’s part of rehabilitation.”
Tell that to the 17,500 people screaming as three swimmers touch the wall within .51 seconds of each other in a gold medal race. You didn’t have to be inside the Aquatic Centre to hear the crowd.
Or to the 80,000 fans packed cheek-to-jowl in the Olympic Stadium as they swell into a fervour over an athlete’s split time which sits within a half-second of a new world record.
These are among the best in the world at what they do.
Period.
There is no distinction. There is no ‘Para’. There is no prefix. There is just pure sport. Pure effort. Pure emotion.
These are elite athletes.

During his Closing Ceremony speech, Sebastian Coe – the Chair of the London Organizing Committee for the Olympic Games – recounted a conversation he had on the London Underground with an ambulance medic. This medic treated some of the wounded after the 2005 London Bombings; he was now one of 100,00 volunteers during the games. He told Mr. Coe:
“I’ve seen the worst of mankind, now I’ve seen the best of mankind” .
Mr. Coe continued:
“I will never think of disability the same way. The games have lifted the cloud of limitation.”

These Paralympics offered me the opportunity to do the most satisfying work of my career. Never have I worked so hard, yet felt so fulfilled.
The only shame is that these Games are ‘Para’ to the mainstream – off to the side; little or no prime-time coverage, little funding, less sponsorship interest and little recognition for the athletes – especially once the games have finished. Because of our ignorance these sportsmen and women, who have already devoted and sacrificed so much, will have to work infinitely harder than the Usain Bolts to find themselves in Brazil in four years.

It’s a shame more of us are not, even from our sofas, part of the crowd in the stands who, as International Paralympic Committee Head Sir Philip Craven put it: “created a wall of noise…hungry and desperate for more.”

Wouldn’t it be cool to have the Olympics merged and televised at the same time. We have men’s and women’s competitions. Why not give these fantastic athletes their own divisions? If we can have 2 why can’t we have 4?
All inclusive at the same time.