Get Daily Email
Join/Login CLOSE
Home / The Good Life / Money / Why Are We So Scared Of Money? 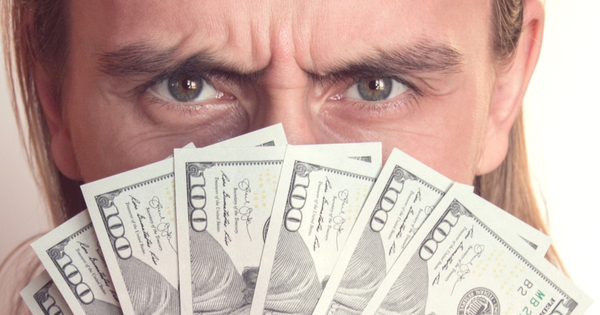 I tap the icon of my banking app and feel my fight-or-flight response kick in. With every step of the two-factor authentication process, the eery buzz that feels like an evil sugar high increases, so by the time the actual number of dollars I currently have appears on my screen, I feel lightheaded, borderline nauseous, and a little out of breath.

No matter how much I’ve scraped together in a month, it always feels like the number that comes up will never be high enough.

And that’s just looking at my bank account. Taxes — which happen every three months when you’re a freelance writer — feel like a trial sent from h*ll.

Privilege check: I am not ‘broke’ in the true sense, where even finding the money for food or shelter is a daily challenge. If I had to categorize it, I would say I’m ‘white middle class female millennial’ broke. My workload and wages fluctuate, which makes saving seem impossible, and I don’t have the kind of family wealth that assures my future is set. Without my husband’s more impressive salary, we wouldn’t be able to pay rent or bills — and even though he would never hold it over me, this unfeminist fact only increases my anxiety around money.

In 2018, the American Psychological Association’s (APA) annual Stress in America surveyreported that 64% of American adults surveyed counted money as a source of stress.

To figure out why I react to money this way, I talked to Dr. Brad Klontz, a clinical psychologist and financial planner who helps people tackle their mental money roadblocks. When I told Dr. Klontz about my fear that the number in my bank account will never be high enough, he explained, “So that is a money script, and it’s a very powerful one.”

A money script is a belief about money that we create for ourselves, usually based on our earliest experiences. In my case, Dr. Klontz pointed to my time in high school as fundamental to how I think about money.

I went to a grammar school, a state-run school in the UK, where entry is dependent on passing an exam. Unlike me, a lot of my classmates came from the private school system. Discussions about skiing holidays, new cars, and designer clothes made me very aware that most had far more money than my family.

Dr. Klontz explained that this gave me a sense of ‘relative deprivation’: a psychological term that means feeling excluded because you have less (or more) money than people around you.

“What you’ve just described is an incredibly powerful experience that will impact your entire life,” he asserts, adding, “The school you went to, of course, there would never be enough money.”

In addition to my personal relative deprivation, I’ve likely picked up some unhelpful money scripts from being a millennial.

Born between 1982 and 2004, millennials got into the job market just in time for the 2008 recession to pull the concept of steady employment and home ownership right out from under us. Dr. Klontz says that this gave our generation what psychologists call ‘learned helplessness.’ We think succeeding is impossible, so why bother?

“You hear this story all the time: ‘Oh yeah, you guys are never going to do better than your parents’ — you hear that enough and you think, ‘Oh well, I guess it’s true.’”

Which leads us, he says, to either become penny-pinching workaholics or to prioritize spending on smaller, more immediate luxuries — yes, like avocado toast — instead of saving up for a house we think we can’t afford.

I asked Dr. Klontz what I — and we — can do to break up with these ingrained beliefs. Firstly, he tells me to look at the bigger picture, in terms of millennial prospects: “How do we know how you guys are gonna do? We have no clue.” Eventually, housing prices will drop again, he assures me, and owning a home will seem viable.

The same goes for my personal approach to money. “You’ve got to come up with a new money mantra,” Dr. Klontz advises. “‘There’ll never be enough money’ inspires no action whatsoever. But, ‘I have x amount of money in my account,’ you can then start to say, ‘well, where do I want to be 30 years from now, 40 years from now?’ And then work backward from there.”

I need to rewrite the story I tell myself when I look at my bank account, to focus less on that powerless feeling and more on practical steps.

Being reminded that no one knows for sure that my generation is doomed to struggle financially compared to our parents does make me feel better, as does learning that there are solid psychological reasons behind my fears (and yours).

It’s not like I no longer worry about my finances. But being reminded that it’s OK to write a story that puts me in control helps me stay calm as I wait for the app to show me the money.

What The Poor Won’t Tell You

How To Include Your Poor & Broke Friends This Summer