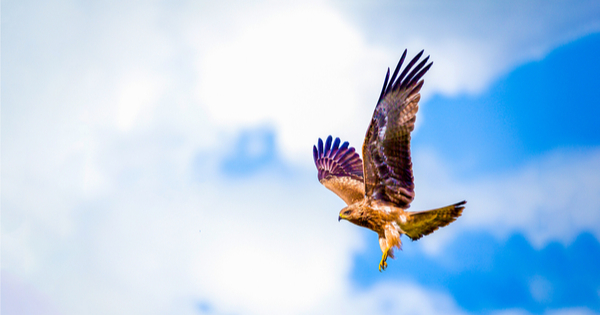 The hawk “veered aslant the wind to scout a new position, her tail glowed orange in the sun.” Joe Walker would have made eye contact with the proud bird had she not been showing him her tail feathers.

“I count eleven tail feathers,” thought Walker, “I can see each one…” The old mountain man was in a doctor’s office viewing the real world through a window.

The doctor expressed amazement at the 65-year-old Walker’s general physical condition before he dropped the hammer: two or three years of eyesight remained by relying on the spectacles just fitted.

Martha Ture was as tired of living and breathing Joe Walker as she had Walker instantly tired of watching his vision deteriorate. The hawk was just looking for rodents, doing what hawks do, but the narrative those human eyeglasses set up required a prodigious amount of research. Enough was enough, Ms. Ture must have thought, and, besides, she had never written a screenplay.

Years and another read later, I still can’t disabuse myself of the notion that she has written a screenplay — -just not on purpose. Her prose is too visual to rest quietly on library shelves. It demands the sort of action a talented director creates from cold words, because her words are not cold.

There is a major supporting role-playing a real historical figure — the Apache leader Mangas Colorado — and it gives me pleasure to understand that there are experienced Indian actors to test for that role. I grew up with the expectation that an Indian character — even a real one — would be played by a white actor with high cheekbones in redface.

The characters — some real and some created by Ture — are set loose on virgin land she views from her substantial experience as a wildlife photographer, where the trick is not just to look at the animals, but to catch them looking back.

The part of the story that is harder to present correctly in our time is the historical context. How would the territories that would become the states of New Mexico, Colorado, and Arizona look in 1860 to the Indians and the explorers who would be the vanguard of the settlers?

The shots fired at Ft. Sumter the next year would mark the beginning of an interregnum on the western frontier. Most of the young nation’s attention would be fixed on what remains the bloodiest war in U.S. history.

This admonition was attributed to Horace Greely, and the attribution remained even after he disclaimed it. Greely purloined the sentiment from John Soule, and added, “and grow up with the country.” Greely was writing in 1865, cheering on the Homestead Movement some 20 years after the United States had begun to debate “Manifest Destiny” in connection with the Texas Annexation Treaty.

It was God’s will, the argument went, the young nation that began with settlements on the Atlantic coast would colonize westward until it reached the Pacific. The fine irony that those who had so recently thrown off their colonial yokes became colonizers themselves was plain only to the indigenous peoples who were the source of the “free land” given away by the federal government between 1850 and 1988.

Westward expansion was one of the simmering disputes leading up to the Civil War. Statehood debates always had to address the balance between free states and slave states. When compromise failed, the resulting hostilities complicated life on the western frontier, to the short term benefit of the indigenous peoples. Settler armies occupied themselves fighting each other rather than policing the frontier.

When the homesteaders headed west postbellum, they had trails to follow, trails that would become more distinct over the years. Even now, we can see places where wagons wore their wheel prints into solid rock.

Where did the trails come from?

They were aboriginal trade routes before they were marked and mapped by white explorers who went west following a lucrative fur trade, or hunting the gold the Spanish did not find, or looking for adventure. Some explorers wanted nothing more than a place to hide and a chance to re-invent themselves.

Returning alive required luck and skill. Those who made repeated explorations — or said they did — often became famous as the lines between autobiography and fiction became harder to see and easier to exploit.

Explorers who succeeded on their own terms but did not pursue fame passed from the national stage leaving only the certainty that stories worth telling were being neglected. After the eyewitnesses passed on, the stories could be cobbled together from the odd person on the odd expedition who kept a journal that became one of many that landed in research libraries. Added to these kinds of accounts authors consider solid gold, there are the historical happenings. For instance, the first (white) man to see some bit of natural wonder and live to tell it acquired naming rights. Shoot-outs sometimes found their way into government reports and newspapers of the time, although those “official” accounts were often embellished.

Finally, and most important to literary value if not historical value, authors of any skill learn about the human life cycle, what motivates people, and how motivation changes over time. Having discerned motivations, authors need the skill to not have the protagonist spew forth reasoning to every other character in a manner that bears little resemblance to how people talk.

It is from the skill of dropping subtle clues that Martha Ture makes us understand Joe Walker as if she had met him and leaves us thinking we have met him. What skillset, Ture must have asked herself, enabled Walker to repeatedly enter a wilderness inhabited by danger on four legs and danger on two legs accompanied by greenhorns and not only return alive, but also without having lost a man? Had her goal been a 21st-century dime novel, she could probably have gone no farther than marksmanship.

Ture gives us reason to think that Walker was a good shot with a long gun or a pistol — at least he was before age began to take his eyesight. Of course, there was much more to Walker.

When the Indians had something his party needed, Walker was not disposed to immediately resort to main force, and he was able to conduct negotiations across cultures in the sign language of the Plains. His ability to bring back entire companies of greenhorns with their hair was probably most enhanced by his skill of interviewing a man who had not been tested and coming quickly and (more important) reliably to the probable outcome.

Ture offers up the tale of Joe Walker’s last expedition, a search for gold in the wilderness between the state of California, recently the Mexican District of Alta California, and Santa Fe. There appears to be a high probability that the gold is there, but that probability is not matched by a reasonable chance of getting to it. The greatest hazards are the desert and the Apaches, but there are only marginally less fierce tribes to contend with and the U.S. Army bluecoats are occupied with pacifying Confederate soldiers when not attempting to pacify Apaches..

“Captain” Walker (an honorific carried long past his military service) has settled on a ranch in California that he often leaves in the charge of his Shoshone wife while he continues scratching his itch to explore. The impending loss of his eyesight is about to enforce his retirement when an opportunity presents itself in the person of George Lount, a man who has been saving every dime he earned to the purpose of funding an expedition to hunt the gold that had so far proved elusive. There was nobody he’d rather hire as a guide than Captain Joe Walker.

Walker disclaimed any interest in staking a gold mining claim, and his life to that point proved him immune to the lure of what the Indians called “the yellow metal that makes white men crazy.” He did his level best to talk Lount out of the expedition, using his knowledge and experience and every argument at his disposal….except his failing eyesight.

“Fool,” Walker thought to himself. “Is he too stupid to believe it? Or does the big empty country call him like a woman? Probably some of both. I should tell him no. It’d be a sin to lead him, blind leading the blind. Old dog want to go a-hunting one more time.”

Once Walker sins by omission, putting together the expedition is a matter of turning down applicants rather than beating the brush to find them. Such are the times and Walker’s reputation.

The meat of the story is in the quest that follows, a quest no less exciting for lack of an answer to the question, “If he doesn’t want gold, what is it Joe Walker does want that is worth risking his life and those of the men so willing to follow him?”

There’ll be no spoilers here beyond my observation that the ending offers as much excitement leading to as much beauty as a hawk on the wing. Coming someday to a theatre near you, I hope, if this country once more can shoot and distribute movies, I hope.