KISS front man’s memoir reveals the most shocking truth of all: Paul Stanley is a good, regular guy.

Well, forty years later it is finally finished. With the recent publication of Face the Music: A Life Exposed, Paul Stanley has completed the KISS library. All four original members have published their memoirs, which have ranged from self-aggrandizing to debauched to your more standard “Behind The Music” victim/redemption narrative.  These are the hallmarks of the rock star genre, of course: Young boy discovers music, gets instrument, pounds it out in a garage, achieves fame, medicates with sex and women, loses it all, then through the grace of a higher power, new spouse, 12-step program, or you, the fans, finds his way back to the spotlight.

Those elements are part of the Starchild’s memoir, too. Forty years surrounded by egomaniacs, drug addicts, and groupies will do that, but the “Behind The Music” arc is not the narrative backbone of his story. Instead, Stanley offers a story likely to resonate with anyone who has dealt with the emotional scars of childhood.

Little Stanley Eisen’s story begins in 1952, where he was born to an emotionally distant couple already parents to a little girl whose mental illness would blossom throughout the siblings’ shared childhood. Stanley was born with a condition named microtia, which rendered his right ear “nothing more than a stump on the right side of my head.” Lacking an ear canal, he was (and remains) deaf on that side, too. His parents came from difficult families and carried their damage into their new family:

Members of my mother’s family were condescending toward other people, and they weren’t beyond ridiculing me about my hair and clothes….My dad spoke of a very difficult and unhappy childhood; he despised his father….My parents were not happy people….They didn’t provide anything positive for each other. There was not warmth or affection in the house.

At school he was “Stanley the One-Eared Monster,” bullied on the playground and falling further behind in classes due to his deafness. At home he dealt with an incredibly dysfunctional, distant family who dealt with his deformity by pretending that it didn’t exist. All that was missing from this potent future rock star cocktail was music, which arrived thanks to Grandma buying Stanley a copy of the Everly Brothers’ “All I Have to Do is Dream.” From there it’s a short hop to first guitar, early bands, finishing at the bottom of his high school class, and the tell-all details that KISS fans crave.

Let’s get those details out of the way quickly: The Starchild has both kind and brutal words for pretty much everyone who has been a member of KISS over the band’s 40 year history. Ace Frehley and Peter Criss get the worst of it, as anyone who has followed the KISS saga expects, but partner Gene Simmons is frequently called out for his selfish, arrogant, narcissistic behavior, too. Deceased members Mark St. John and Eric Carr take some bad ink, and Vinnie Vincent is depicted as a brilliant guitarist but abhorrent human being.

What’s a little different about Stanley’s memoir, though, is that he calls himself out, too:

Even within the band, I never let my guard down. I remained remote around my bandmates. I maintained a wall the made it difficult to know me….When the other guys joked around with each other, I chimed in. When they made fun of me, however, I didn’t take it well. I never betrayed why I was sensitive.

Even at the height of the band’s ’70s success, Paul Stanley the rock god remained Stanley the One-Eared Monster. While his bandmates  self-medicated with drugs and women, Stanley opted for women, Tiffany lamps, and rare guitars.

KISS was well into their second decade (and Stanley in his third decade of talk therapy) before addressing the root of his self esteem issue: His missing ear. With that taken care of  courtesy of a brilliant plastic surgeon, the guitarist got about the business of truly growing up: selling off the material objects that didn’t fill the hole in his soul, and eventually replacing his revolving bedroom door with a “spouse wanted” sign.

It’s this part of the narrative where Stanley is most introspective, and the more personal his words the more universal they become. That first marriage may not have worked out, but the now middle-aged rock star became a first time father:

“Until I cut the umbilical cord, I didn’t realize the depth of it, the holiness of it, the sacredness of it. Up until that day, life never made much sense to me….But as soon as I held Evan in the delivery room and we made eye contact, I suddenly got it: We don’t really die. We were here on earth to leave the world a better place through our children. And through our children we lived on.”

I don’t know an engaged father who didn’t feel some variation of that sentiment when he first saw his child. It’s a brilliant moment, one that breaks the fourth wall and makes The Starchild just another dad pushing a swing at the playground.

Stanley’s commitment to family is evident as his brood grows with his second (and current) wife, but Stanley the One-Eared Monster still lurks in the wings.  In the late ’90s the singer landed the title role in a Toronto production of Phantom of the Opera: A deformed musician who hides behind a mask.  The Phantom quite literally was the role that Stanley Eisen was born to play, and that came through to an audience member who worked with AboutFace, an organization that works with children who have facial differences. The singer agreed to speak with a group of kids and their parents, and he opted to lay down the realities of their situation that his distant, avoidant parents never shared with him:

I wanted to explain that my life had been tough, lonely, and painful; I also wanted to acknowledge that it wouldn’t be easy for them. Maybe nobody had ever told them that. Perhaps it would be a breath of fresh air for them to hear, “Yes, success is more difficult to achieve for someone with a facial difference. Happiness is more difficult to find. The odds are worse.”

That may sound a bit harsh, especially out of context, but he’s right: There’s a good chance that some of those kids never had an adult play it straight with them. In so doing he not only helped them but himself: “The more opportunity I have to treat people the way I wished I myself had been treated, the better I feel,” he writes later.

Face the Music: A Life Exposed won’t convert you into a fan of The Starchild or his band, but by the last page I guarantee you will feel genuine respect for Paul Stanley the man, and that is long overdue. 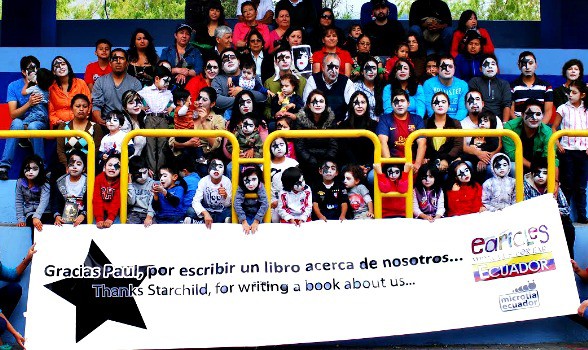 Volunteers and a group of Ecuadorian children – who have all experienced microtia or atresia – gathered  to paint their faces like Starchild to thank Paul Stanley for bringing a voice to Microtia with his New York Times best-seller Face The Music. Stanley himself suffered from Microtia and has been ambassador for AboutFace since 2010 to bring awareness and support to individuals with facial disfiguration. The photo was arranged as a surprise for Dr. Sheryl Lewin, a Microtia surgeon at K and B Surgical Center and former of the Earicles foundation, who was in town to educate about Microtia and treatment options.

I was never a fan of Kiss, but I did not dislike them, either – they seemed like a fun band for many and I paid no attention, however, reading this made me want to know more about Paul Stanley both during his heyday with the band, and all that went on later in his life.

Thanks for writing such a thoughtful review, I am putting the book on my “to read” list. A book I never, ever thought would be on my nightstand, go figure.

Facebook82TweetPin2EmailShares84
wpDiscuz
1
0
Would love your thoughts, please comment.x
()
x
| Reply
Share this ArticleLike this article? Email it to a friend!
Email sent!