—
Being invited to sit at “A Bigger Table” by John Pavlovitz to share a safe space, relax while sharing joys and sorrows, strength, and flaws is a simple, yet sacred invitation.

I had the privilege to have coffee with John a while back. His heart is as genuine as the one he so courageously shares in his writing. If you aren’t familiar with John’s blog, he went viral in 2015 after writing a piece about the acceptance he would extend to his children if they turned out to be gay …even though he’s a pastor.

John freely shares his interpretation of God’s heart for others, even though it’s gotten him ridiculed by the very church he loves to the point of being shown the door. Meanwhile, others revere his boldness as a voice for the marginalized, a leader to fellow resistors, healing to those hurt by Christians, and even a revolutionary crusader towards those in willful silence.

John’s first of two book releases comes out October 6, and is called “A Bigger Table.” His central goal? “I hope readers who’ve given up on organized religion, but still have a desire to engage in spiritual community, will be encouraged to look for or to start table gatherings.” As someone who left the church to maintain the same heart of God’s love that John does, I am excited this message is being given a platform.

“A Bigger Table” is about John’s personal journey pushing back while a member of organized religion to becoming a Progressive Christian, Pastor turned thought-leader. This book will speak to the heart of anyone who seeks to be a person with a LOVE FIRST attitude for all of humanity.

Below, I share three of the most resonating lessons from the book, but you will be immediately captivated by the first sentences of “A bigger table.”

1-We are given opportunities to expand our table.

We are reminded how we are handed opportunities to open our hearts and practice love. Once we open our hearts to something new, like showing loving-kindness for your gay siblings, your Muslim co-worker, your black and Latino neighbors, it can’t be easily shut again.

“One of the things you learn when you walk down the path of being an ally is that people aren’t LGBTQ based on the consent you give or don’t give to them, the approval you provide or withhold. That’s not how gender identity and sexual orientation work. Your acceptance doesn’t give people permission to be anything. It simply allows them to be fully authentic in your presence and to feel loved as they are.”

2-“Organized Crime and Organized Religion can be frighteningly similar.”

If you’ve been in church life at all, you know when you’re in complete alignment with the teachings and following your faith the exact same way as your fellow believers, things are good, blessed even. But start asking questions, deviating from the norm or choosing to accept the things they oppose and you will find yourself quickly removed from the cool kid’s table.

“One of the biggest, most damning mistakes too many Christians so willingly make is assuming that God is as much of a judgmental jerk as we are. But what if we could make room for different and space for disagreement in our spiritual communities? What if we could give permission for moral failure and freedom to not be certain, and the chance to gloriously fail without needing those things to become black marks against people or death-penalty offenses? What if we made space for people who are as screwed up as we are?”

3- We need to practice “Radical Hospitality”

This was my favorite chapter of the book because it reminded me of forgotten times I received lovingkindness in radical hospitality. As a girl of 20, I was on summer staff at a Christian retreat center operated by John and Laura Walt. Even though my mother and grandmother were both good mentors in hospitality, I had never experienced anything like when I met the Walts the first time. Radical Hospitality like theirs started with the warmest of greetings in the way they smiled as they joyfully said your name, the way they twinkled as they excitedly looked you in the eye and the way their arms opened with loving acceptance from the moment they met you.

The warm greetings were just the start of the way the Walts showed hospitality. Whether dropping by unannounced or invited, there was always a place for you at their table. You could count on the meals being delicious and homemade, while the conversation flowed from silly to sacred. The Walts were not like any others I had met, especially within the church. I saw them give that same warm greeting to everyone, no matter their status on any level, knowing there was nothing necessarily different about the way they made me feel so special, and this is EXACTLY as it should be.

In the book, Jesus’ kind of transformative hospitality “means that whatever caveat we would add as a condition to welcoming or serving another (race, sexual orientation, gender, political affiliation) will need to be removed. This kind of lavish acceptance is something people are craving but experiencing less and less in the church these days, and they’re rightfully going elsewhere for it.”

When I asked John about what he wanted people to take away most from this book, he said, “Whether people are religious or not, I hope they’ll leave challenged to see people differently; to expand the table of their own hospitality to those who they may have excluded.”

Those whom taught me about hospitality in my younger days had a profound effect on how I intentionally invited people to sit at our family table, both literally and figuratively. With life and changes, I had certainly gotten away from it but am challenged by this book to get back to it…I even started this week. Sometimes hospitality will come naturally and easily, but what a radical shift we would have in our world if we intentionally invited others into our space to serve them, love them and be known by them. 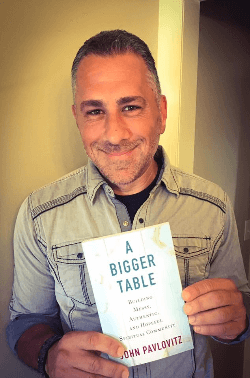 Regardless of your background, you will walk away from “A Bigger Table” knowing “We don’t have to share someone’s experience to respect their road.” Because even though we were told as children we are all the same on the inside, we get overwhelmed with responsibility, biased by hurt, entitled by privilege or simply forget. Invest yourself in the lessons of “A Bigger Table” and you will be reminded we all deserve a warm greeting and a seat at the table.