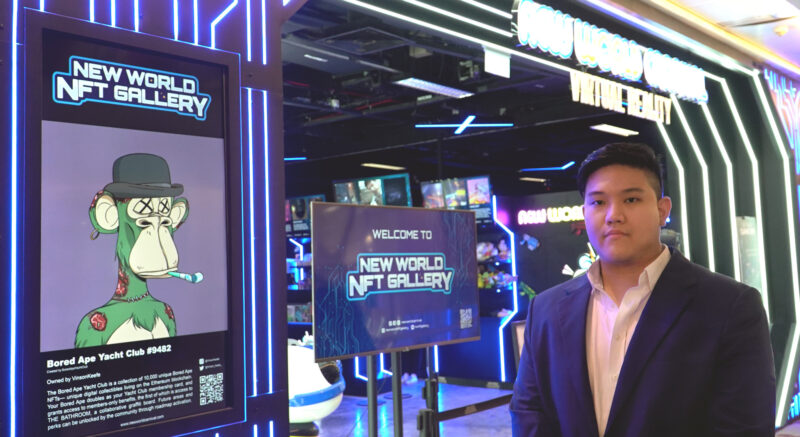 The evolution in the earning module has challenged the conventional status quo and brought in a shift from well-believed 9-5 to self-fueled entrepreneurship. This revolutionary boom has brought a lot of names who started as startups but achieved the titles of unicorns. In this entrepreneurial age, a Singapore-based entrepreneur, Vinson Keefe, has come up with a dream of bridging the gap between web2 and web3 via the metaverse.

Vinson Keefe’s journey as an entrepreneur started with gaming, where he once made over 6-figures in a single month by selling in-game items. After getting that first kick of success, he took a deeper dive into business and introduced The Alley, a Taiwanese beverage chain, to Singapore, growing it rapidly, and later, selling it off for a decent 7 figures.

An Ingress in Real Estate

Not only was he into F&B, Vinson went on and found a foothold within the real estate industry. This led to him looking toward owning and managing a $200 million hotel development project under the largest hotel franchise chain in the world, Marriott.

Concurrently, Vinson’s passion for gaming did not falter and it was not long before he was back in touch with it. He then started a Virtual Reality gaming business named New World Carnival to facilitate game lovers with a tangible virtual arcade gaming experience.

Stepping into the Crypto & NFT Space

Post covid 19, Vinson wanted to take out a solution to the tumultuous situation created by the global pandemic so that he never had to experience any obstruction in the way to achieving his vision. In this quest, Vinson realized that crypto is going to be the future of investment, and this realization motivated him to develop his mention-worthy personal portfolio of over eight figures in the crypto NFT space.

In preparation for his upcoming projects, he introduced The New World NFT gallery, which revolves around the vision of spreading NFT awareness among the local community and letting them realize the potential use cases of NFT.

To bring awareness using the newly launched NFT gallery, he hosted multiple events for the Bored Ape Yacht Club, Azuki and Doodles in Singapore. Projects like Nanoverse and Karafuru have also utilized the New world NFT gallery as one of their gathering spots for Singapore holders.

To take New World NFT’s popularity to the next level, Vinson aims to launch an alpha pass with special perks that he has yet to disclose in detail. However, he hinted that it will enable pass holders’ access to all of New World’s upcoming project collaborations at the same time allowing them to enjoy several web2 and web3 perks. The utilities will be available exclusively to the New World Pass holders.

The Metaverse Blueprint From Gaming to MaaS

Vinson is simultaneously planning to integrate his metaverse project, Voxygon, which aims to turn into the most sustainable and accessible decentralized metaverse project. It will allow people to flaunt their creativity, play, learn, and earn via an extensive ecosystem with boundless possibilities.

Vinson wants to establish Voxygon as the catalyst of the web 3 adaptation progress. To launch Voxygon, Vinson has already seeded $9M. The entire mission is fueled by the objective of transiting a gaming metaverse to Metaverse as a Service (MaaS).

Behind the scenes – Bypassing Obstruction

At the age of 23, with his exceptional management skills and discernment, Vinson has already established himself as an achiever. With stout planning and dedication, he managed to scale The Alley successfully in Singapore and likewise handle the development of Marriott hotel. Driven by the same level of dedication and willingness, Vinson has also turned his New World NFT Gallery into a hub for NFT and crypto enthusiasts to gather around.

However, Vinson’s journey was not free from challenges and difficulties. Due to having impaired hearing, which resulted in difficulties in completing his studies and challenges in networking, he was constantly misunderstood and assumed to be ignorant.

In an effort to turn his weakness into strength, Vinson picked up Neuro-Linguistic Programming, being sharp in reading body cues has helped him improve his communication with others. Besides, he learned to filter his circle and surrounded himself with people whom he could entrust his works with.

With resilience and confidence, Vinson is continuing on his path with a dream of establishing Voxygon as the leading metaverse in the web3 sphere. He also expects to see his project bring a deeper understanding to the masses about the future of web3. In addition, he wants to push himself further as he aims to create a global footprint for his hotel brand, Varel.

Vinson believes that fearlessness points to transparency and sincerity. He prefers keeping an open mind and always staying committed to his goals. Besides, he considers time management is key, you would have already won half the battle by scheduling life/work neatly.

This content is brought to you by Ayushi Mehta