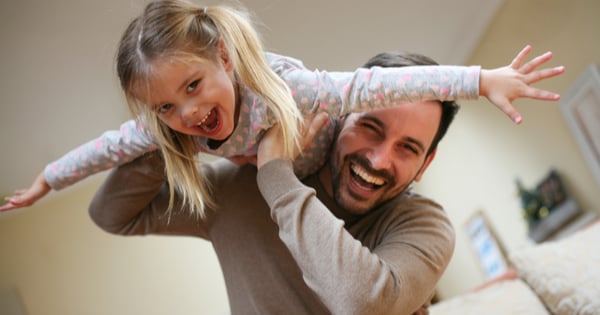 Too many fathers lose their children in divorce, but not in the way you may think.

It’s not the courts or judges that take their kids away. It’s apathy. Or possibly the unstated cultural bias that lets the mother take full responsibility, causing fathers to slowly fade out of their children’s lives.

Raising kids while married is hard enough. Raising kids as a divorced dad is even more difficult. (And no one ever tells you just how hard it is because I suspect they secretly want everyone to think they have it all figured out). Divorce takes the organized chaos of a normal family and converts it into total mayhem. At least initially. Schedules are in a constant state of ebb and flow, vacations are a new point of negotiation, and the fight for the kids on holidays can feel like a down-right jousting tournament.

But divorce doesn’t have to adversely affect the relationship between a father and his children. In fact, it can be an opportunity to strengthen those bonds.

Dads need to step up and make sure they stay involved in their children’s lives, as much or more than they did while married. That means making hard choices. Giving up that weekend playing golf. Taking the job that doesn’t involve nights or weekend or travel—even if it pays a little less. Choosing an apartment near your children’s lives instead of close to your new girlfriend.

In the past, many divorced dads faced biased court systems and unjust custody battles, leaving behind a wake of others who felt it pointless to even try. But try they must.

Studies demonstrate that children of divorce that grow up with fathers that are significantly involved in their lives have higher school achievement, are more likely to be employed, are less likely to partake in violent crime, and are more empathetic and trusting than those who grew up without the regular presence of a father. Fathers are, in essence, indispensable to their child’s development. No one should let you believe otherwise.

The number one predictor of children leading happy and successful lives after divorce: equally involved fathers. Fathers who have at least 50% of the parenting time.

Fortunately, the culture around divorce and divorced dads, in particular, is changing. Judges are more likely to divide time equally among parents, and moms are no longer unjustifiably favored with unbalanced custody schedules. While gains are slowly being made, the cultural stigmas still exist. A still widely held cultural bias is that a mom has the right to children, but a dad has to fight for them.

Historically, dads have started with a disadvantage in custody battles, as it was assumed they will be less involved than the mothers. But the fight for equal time is worth it, to both you and your children.

Dads shouldn’t be afraid to raise their daughters either.

I grew up with two brothers and a dad and let me tell you, my dad was one heck of a parent. He braided my hair, painted my toes nails, and never missed an afternoon tea party. He also taught me how to nail a 3-pointer, told lame jokes, and insisted I learn to change a tire before I could get my license.

Finding the balance between your role as a dad and your new role as both parents is about as easy as spinning straw into gold, but eventually, you just get it. It’s remotely impossible to be perfect, but it doesn’t mean you can’t try. It’s all about knowing when to be stern and knowing when all your kid needs is a hug. And as a child of a single dad, I can tell you, I admired his willingness to try more than anything he was ever able to pull off. He was my knight and his shining armor was made of effort.

Effort. Simple as that. Your children notice way more than you may think. They notice the way you talk to your spouse, or about them. I noticed when my dad was watching videos on how to curl hair for my dance recital, and when he tried to talk to me about boys, even when he tried to make me into a future football prospect. Of course, he practically burnt my hair off my head, had no idea what he was talking about when it came to boys and teenage girls, and I sucked at football. But I knew he was trying. Trying to teach me things he didn’t understand himself. All that mattered to me was that he was there. No matter what.

Your kids don’t expect you to be Superman, you most likely already are in their eyes. They just want to know that you will always have their back, that you’ll teach them things, and that you love them. Sometimes people think that showing someone you care has to be said in some formal gushy way, but the best, and easiest, way to show them it just by being there. Show up to football practice and to ballet rehearsals. It is more than worth it to fight for your time with your kids, to watch and help them grow.

That connection and the benefits of watching your child succeed is absolutely worth the possible courtroom drama and the annual argument over Christmas. Finding a schedule that works might be overwhelming, much like the rest of the divorce process. There are common equally shared custody schedules a large portion of families going through a divorce use, such as the 2/2/3 schedule and the 2/5 schedule. Of course, although they work for some people, they may not be the best fit for you. The schedule you pick for your family should fit into your specific lifestyle; perfectly suited for you and only you.

Maybe you and your wife didn’t live happily ever after. And you can bet that creating a new home for you and your kids will be a lot harder than it was before, but it’s not impossible.

It can be easy to feel defeated and as if you’re all alone, but have the confidence to raise your kids. As much as people don’t want you to think it, every one’s figuring it out as they go.

I'm 1 of 5 kids raised by absolute chaos and my writing is a way to explain the unexplainable. My words reflect the lessons I've learned, the hardships I've endured, the misunderstandings I've experienced, and the love my (not so average) family has brought me. I am currently writing for a divorce blog at SnapDivorce https://www.snapdivorce.com/blog/.

Facebook53Tweet1Pin2EmailShares56
wpDiscuz
0
0
Would love your thoughts, please comment.x
()
x
| Reply
Share this ArticleLike this article? Email it to a friend!
Email sent!