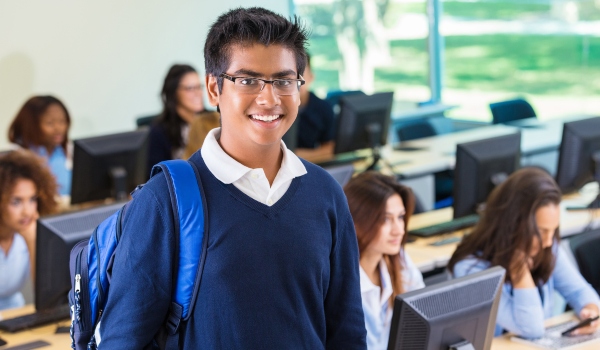 —
Of course there are far more than five reasons why The Testaments has jumped to the top of our reading list and why its publication was among one of the most eagerly anticipated of 2019, if not the decade. But along with the other eight million people around the globe who own a copy of The Handmaid’s Tale, we are more than a little excited for the follow up to arrive at the Library.

Last night I went to the National Theatre’s live screening of Margaret Atwood in conversation with journalist Samira Ahmed, an event that was streamed to 1,400 cinemas of Handmaid fans all over the world.

So as we patiently wait for The Testaments to arrive for the Library’s collection, here’s a very brief reflection of five of my takeaways from last night’s launch event – and the things I’m most looking forward to encountering in the reading of the novel.

While The Handmaid’s Tale was told solely from the perspective of Offred, The Testaments, as the name implies, includes the testimonies of three different voices. One we are familiar with from The Handmaid’s, that of the formidable Aunt Lydia. Then we are introduced to two new young women – one rescued from Gilead while still a baby (Daisy), and Agnes, who grew up in Gilead and knows no other way of life. We learn of what drove Lydia to her position of power and of her life before Gilead, and of the parallel lives the Daisy and Agnes have led. The evening’s event featured readings from the book by Ann Dowd (who plays Aunt Lydia in the TV adaptation), Sally Hawkins and Lily James. Atwood hinted that their separate tales may be more connected then first meets the eye…

History has a funny way of repeating itself. Many of the issues raised in The Handmaid’s Tale and The Testaments, such as men abusing positions of power, rules and laws being created and imposed by those who will never be impacted or effected by their force, the restriction of free speech, episodes of violence and mass execution, ‘are not new motifs’ Atwood said on more than one occasion. When asked about how Atwood conjures up her dystopian worlds, she very matter-of-factly stated that ‘these are not made up’, instances of all have taken place in the real world over the course of time, and continue to do so. Atwood mentioned historical figures and events that had influenced her writing: Henry VIII, Thomas Cromwell, Mary Queen of Scots, Stalin, Pinochet, the division of Germany, extreme Puritan traditions in America, the fear of 70s cults, and a disturbing story from the Old Testament (the concubine of a Levite), to name but a few. Literary influences from Vasily Grossman and George Orwell also resonate through her pages.

Through her writing and public eminence Atwood continues to strive for equality for women and the launch of The Testaments is run alongside a campaign with Equality Now, an organisation supporting ‘a just world for women and girls’. When asked about how Atwood felt about the use of the Handmaid’s outfit by political activists in recent years, particularly around the abortion debate in the US, Atwood highlighted its silent power – women wearing the attire can’t be penalised for any reason – they have their heads down, they are quiet, they are covered to the ankle – yet their visual protest speaks volumes. An element of pride was detected in Atwood’s voice when she spoke of how her timeless creation has become such a cult image and sign of resistance.

‘The Handmaid’s Tale is optimistic’ Atwood told us with a wry smile. Of course the audience laughed. The fact that it ends with a symposium shows that humanity has survived the atrocities of the Gilead regime. When we survive history we do what we always do with it, ‘turn it into something studied in schools, a symposium, or a theme park’ Atwood joked (but we all know it’s true). She insinuated that the same element of hidden optimism is buried within The Testaments too; we know that some children are rescued, Daisy is the living proof. But what lasting damage is done? And what becomes of Aunt Lydia and Agnes?

In a world that seems on the brink of collapse ‘what can we do to save humanity?’ Atwood was asked by one of the audience members. Her response: the number one thing we need to address right now is the issue of climate change.

In a passage from the voice of Aunt Lydia, a world ravaged by extreme weather and its disastrous effects is described; a frightening echo of the pictures we see on the news today with more and more frequency. ‘When the environment is disturbed, you get more social unrest’ Atwood proclaimed. She spoke of her admiration for activist Greta Thunberg and of her optimism around young people and the Extinction Rebellion campaign. 50 years ago when scientists foresaw the climate crisis no one listened, Atwood remembered, but now we have people paying attention, and acting, and who will soon be able to vote on these matters. It seems even the green figure on the front cover of the book could be a nod to Atwood’s concern on this subject – the daughter of an entomologist, Atwood grew up frequenting the forests of Quebec and Ottawa, even living in them in a tent as a young child while her father built their log cabin home.

‘You don’t believe the sky is falling until a chunk of it falls on you’ were the last words Ann Dowd as Aunt Lydia read at the event and the youthful looking silhouette of the girl on the book’s cover, arms outstretched, is the figure of hope on which the evening’s focus ended. Atwood maintained that climate change needs to be the primary focus for politicians today and we are not too late to address this.