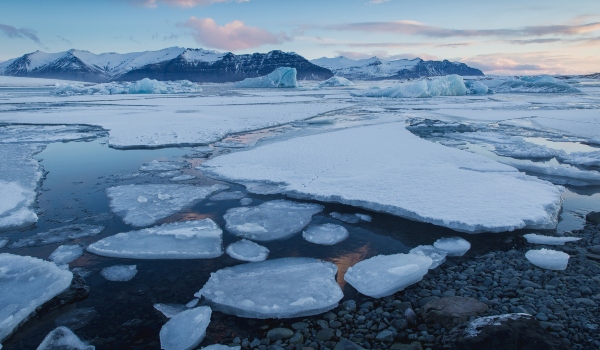 LONDON – You’d have to worry about James Balog’s knees. He has an operation on one leg and then, for a bit of gentle recuperation, goes walking on a glacier. Not surprisingly, before too long he needs to return to the surgeon’s table: then it’s back to the ice once more, only this time Balog is being lowered down into a crevasse, a cascade of freezing glacier melt water rushing within inches of his camera. Balog is a photographer who has specialised for many years in what he describes as the “contact zone” between humans and nature. His work includes photos and documentaries on animals and forests, on the 2004 tsunami in Southeast Asia, on Hurricane Katrina and much, much more. In 2006 he was given an assignment by National Geographic magazine to photograph glaciers and ice formations. He became a glacier groupie and the following year started the Extreme Ice Survey (EIS), photographing and filming glaciers round the world. Chasing Ice, released in the US last year and now doing the rounds of selected cinemas in the UK, captures the work of the EIS project. Balog was once a climate change sceptic. Not any more. He and his team set up 28 time lapse cameras filming glaciers from Mount Everest in Nepal to Alaska, Greenland, Iceland and the Rockies in the US. Every half hour of daylight the cameras would click away, recording changes in glacier shape and size. The results, seen in the film, are startlingly clear. “This is the memory of the landscape”, says Balog, standing by one of his cameras at a glacier in Greenland and holding up a small file of film. “I never imagined you could see glaciers this big disappearing in such a short space of time. That landscape is gone and may never be seen again in the history of civilisation.” Balog now tours the world with his photos and film showing, in his words, “how extraordinary amounts of ice are disappearing with shocking speed.” He wants people to see for themselves the visual evidence of climate change. “Seeing is believing”, he says.

Up an ice field on crutches

Chasing Ice is visually stunning: at one point young members of the survey team are camped out on the ice overlooking the Illulissat or Jakobshavn glacier half way up the west coast of Greenland. They’ve been there for days – the wind its threatening to blow the tent away, the cold is intense. Then, in little over an hour, a piece of glacier more than half the size of Manhattan Island breaks or “calves” away. It’s the first time such a large-scale calving event has been captured on film. Giant pieces of ice shoot 600 feet up in the air, the glacier doing cartwheels, the deep, roaring sound echoing like the last breath of some giant, fatally wounded animal. “The only way that you can really try to put it into scale with human reference is if you imagine Manhattan, and all of a sudden, all of those buildings just start to rumble, and quake, and peel off, fall over, and roll around”, says one of the film-makers. “This whole massive city just breaking apart in front of your eyes.” The film was not an easy one to make, with delicate electronic equipment being placed in some of the harshest conditions on the planet. Cameras would have to be secured by elaborate systems of anchors and wires. At one point Balog’s team return to the cameras to find the equipment has failed and months of filming has been lost. And then there are those knees. Towards the end of the film Balog is seen struggling up an ice field on crutches. There’s a postcript saying his knees have been repaired once again, this time with the aid of stem cell surgery. The EIS project is ongoing. Let’s hope the knees keep going as well. – Climate News Network