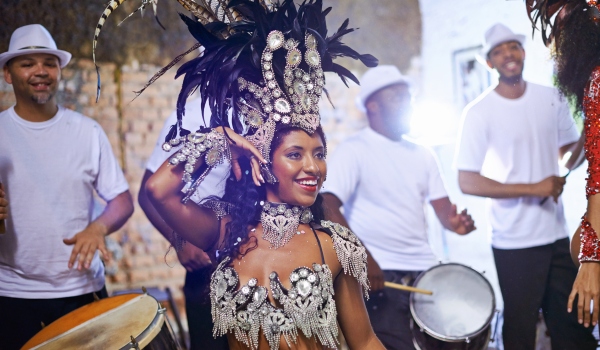 Concern about the environmental impact of industrialised farming through the use of pesticides and the destruction of the rainforest has even spread to Brazil’s famous Rio carnival.

One of the most famous samba schools, Imperatriz Leopoldinese, will take part later this month in the all-night parade in Rio de Janeiro, singing and dancing to highlight the plight of the Amazon’s indigenous Xingu population, whose reserve is now completely surrounded by cattle and soy fields.

The musical protest has aroused a furious response from the agribusiness lobby, which has accused the sambistas of denigrating their efforts to feed the population.

But the samba school’s concern is echoed in a report that spells out the negative consequences of industrial food production, both on the environment and on people’s health.

The report is published by GRAIN, an international not-for-profit organisation that works to support small farmers and social movements in their struggles for community-controlled and biodiversity-based food systems.

Factory farming subsidies
It argues that factory farming is promoted by the industrial meat lobby, corporate subsidies and free trade agreements, and it recommends instead small-scale mixed farms.

The obvious solution is to cut meat consumption in rich countries. The US and Australia eat 90 kg per person per year, Europeans average 65 kg, and in China − where fast-food restaurants, meat imports and factory farming are rapidly expanding − it has reached 58 kg.

In stark contrast, meat consumption in India is 3kg per person and in Ethiopia it is 4kg.

This reduction in meat eating would not only help to fight climate change by reducing emissions, it would also greatly reduce some cancers and heart and lung disease and, some scientists say, cut infectious disease and reduce the emergence of antibiotic resistance.

The UN’s Food and Agriculture Organisation (FAO) says that greenhouse gas emissions from industrial meat production are now higher than those of all transport systems combined.

“The food system is responsible for up to 30% of all greenhouse gas emissions,” the GRAIN report says. “Some of these emissions are due to the growth of packaged and frozen foods, the increased distance foods are shipped, and the rise in food waste.

“The US, Europe and other wealthy countries
have subsidised industrial meat and dairy
production for decades”

“But the most important source of food system-related GHG emissions is the escalation of meat and dairy consumption – made possible by the expansion of industrial livestock and chemical-intensive feeds.”

A fall in meat eating need not harm the world’s small farmers and pastoralists. There are an estimated 630 million small farmers practising low-emission mixed farming, plus 200 million herders who often graze their animals in areas where crops cannot be grown.

They live in the global south, where meat and dairy consumption in most countries – but not middle income countries such as Argentina and Brazil – is at sustainable levels.

And they contribute little to climate change, recycling animal waste and crop residues and using their livestock for many purposes, such as traction, energy, labour, hide and cash.

“Small-scale livestock production also enhances family nutrition, giving people access to both animal-based and plant-based foods,” the GRAIN report says. “In these systems, livestock is an essential part of people’s livelihoods, food security and health, as well as an integral part of cultural and religious traditions.”

Other advantages of cutting meat consumption would be to lower the production of methane − a major greenhouse gas (GHG) − from livestock, and reduce food waste, which generates about 4.4 gigatonnes of GHG emissions each year.

In 2013, OECD countries distributed US$53 billion in subsidies to livestock producers, with the EU paying US$731 million to its cattle industry alone. In the same year, the US Department of Agriculture paid more than US$500 million to just 62 producers supplying meat and dairy products in school meals, but only a fraction of that to fruit and vegetable suppliers.

“The US, Europe and other wealthy countries have subsidised industrial meat and dairy production for decades,” GRAIN says. “These countries’ policies have generated astronomical profits for corporations, and have eroded the health of their citizens while worsening the climate.”

International trade deals such as the Transatlantic Trade and Investment Partnership (TTIP) and the Trans-Pacific Partnership (TPP) favour international corporations, and would even make local preferences illegal and subject to harsh penalties.

Yet going local, GRAIN insists, is at the very heart of commonsense strategies to reverse climate change by addressing the ways in which we produce, distribute and access food. – Climate News Network