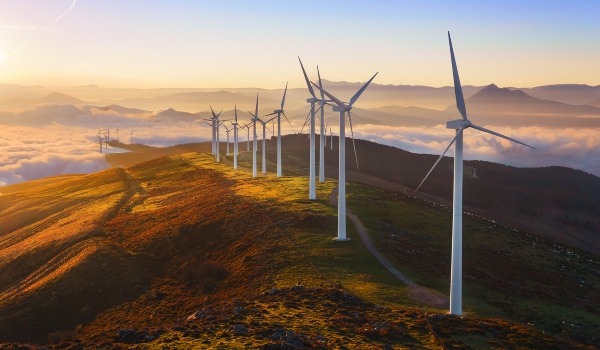 LONDON – Wind power may in some conditions manage to produce less energy than its supporters believe it can, two US researchers suggest.

In the latest contribution to the debate over wind’s potential, they say they have found evidence that some of the largest wind farms may cause effects which substantially reduce their generating capacity.

The research, published in the journal Environmental Research Letters, suggests that the generating capacity of large-scale wind farms has been overestimated.

Each wind turbine creates behind it a “wind shadow” in which the air has been slowed down by drag on the turbine’s blades. The ideal wind farm strikes a balance, packing as many turbines onto the land as possible, while also spacing them far enough apart to reduce the impact of these shadows.

But as wind farms grow larger, the researchers say, they start to interact, and the regional-scale wind patterns matter more. This means we may not manage to obtain as much wind power as scientists had thought.

The authors are David Keith, professor of applied physics at the Harvard school of engineering and applied sciences and Amanda S. Adams, assistant professor of geography and earth sciences at the University of North Carolina at Charlotte.

“One of the inherent challenges of wind energy is that as soon as you start to develop wind farms and harvest the resource, you change the resource, making it difficult to assess what’s really available”, says Professor Adams.

“If wind power’s going to make a contribution to global energy requirements that’s serious, 10 or 20% or more, then it really has to contribute on the scale of terawatts in the next half-century or less”, Keith adds. A terawatt (TW) is one trillion watts. In 2006 energy use worldwide amounted to about 16 TW.

Keith says: “Our findings don’t mean that we shouldn’t pursue wind power – wind is much better for the environment than conventional coal – but these geophysical limits may be meaningful if we really want to scale wind power up to supply a third, let’s say, of our primary energy.”

“The real punch line is that if you can’t get much more than half a watt out, and you accept that you can’t put them everywhere, then you may start to reach a limit that matters.”

To stabilize the climate, he estimates, the world will need to find sources for several tens of terawatts of carbon-free power within a human lifetime. In the meantime, policymakers must also decide how to allocate resources to develop new technologies to harness that energy.

In doing so, Keith says: “It’s worth asking about the scalability of each potential energy source – whether it can supply, say, three terawatts, which would be 10% of our global energy need, or whether it’s more like 0.3 terawatts and 1%.

“Wind power is in a middle ground. It is still one of the most scalable renewables, but our research suggests that we will need to pay attention to its limits and climatic impacts if we try to scale it beyond a few terawatts.”

Apart from debate over wind’s fitfulness and inconstancy and claims that it is environmentally more damaging than acknowledged (to birds and landscapes, for example), scientists differ on the contribution it can make to a low-carbon economy.

But this latest study, funded by the Natural Sciences and Engineering Research Council of Canada, chimes with the conclusion recently reached by other US researchers (see our story of 20 January, Renewables: The 99.9% solution.

Consistent wind power can be obtained, they said, if the turbine fields are dispersed at distances greater than 1,000 kilometres. – Climate News Network