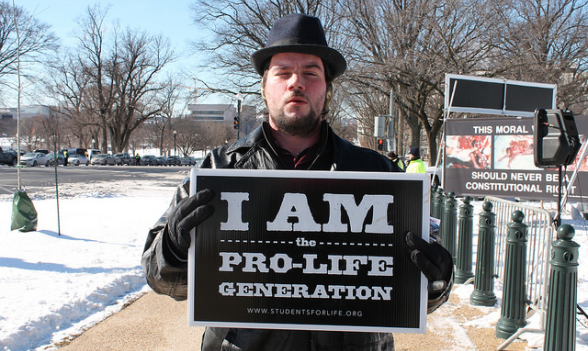 Most people who identify as pro-life are only pro-baby. The responsibility is a much bigger commitment than simply holding a sign.

When I left the Republican Party in 2001, it was because the party had gotten too liberal for me. Yes, you read that correctly. Too liberal. As a conservative evangelical Christian at the time, I was looking for candidates who were pro-life, pro-death penalty and anti-gay. Like my fellow ultra-conservatives, I could not vote for a candidate in good conscience who was not against abortion. I hoped that one day Roe V. Wade would be overturned and millions of innocent lives would be saved.

Over time, I began to rethink what I believed about a lot of things. I chronicle that mental transformation in my book. As the years tick by, however, though my religious commitment has waned, my commitment to pro-life causes has deepened.

One of the issues I take with the pro-life movement is that most aren’t willing to see it through. Once the child is born, it’s hands off. God forbid the child is mentally or physically disabled, born into a poor family, or worse, gay. I have to admit I spent a lot of years in the “pro-baby” camp feeling that once the child was born, it was solely the responsibility of its parent, or itself. Regardless of the circumstances, that child just needed to to pull himself up by his bootstraps and live life according to my judeo-Christian morals. I believed that would solve everything.

I’m not as naïve or gullible today to believe that simply preventing abortion will solve all the world’s ills. Abortion is complicated. I’ve met people who have had to make that decision and the only thing I know for sure is that I’m glad I was never in their position.

I have mixed feelings about the act of abortion. Yes, it’s the woman’s body, but it takes two people to make a baby. Why is it that only the woman gets to decide to terminate the pregnancy? Is that fair? I don’t know. My daughters and I have debated this issue with no resolution and no definitive answers. But the questions are much deeper than this.

As I’ve rethought what it truly means to be pro-life, I’ve wondered how many pro-lifers would stand outside abortion clinics holding up “Stop Abortion” signs if they knew that 42% of women who have abortions have incomes below the federal poverty level. Are these conservatives and their “no welfare” values prepared to take care of these kids? A fair percentage of the babies they want to save will likely end up on some kind of government assistance. A 2013 study shows that one out of 7 people in the United States are living in poverty. That’s 46.5 million people. One out of 16 people are living in deep poverty, which means receiving an income of only 50% of the poverty line level.

Of the women who get abortions, 30 percent are black, 25 percent are Hispanic and 9 percent are of other non-white races. That’s because the highest rate of poverty and lack of opportunity lies within minority communities. The U.S. Census Bureau showed poverty rates for children under 18 at 38.2 percent for black and 35 percent for Hispanics, compared to 12.4 percent for white children.

To be pro-life also means to be anti-poverty. It is unreasonable to expect people who constantly live at or below the poverty level to always be productive members of society. It’s not that they don’t want to, some of them simply can’t. In August 2013, Science Magazine showed that poverty hinders our abilities to “make decisions about school, finances, and life, imposing a mental burden similar to losing 13 IQ points.”

Writer Derek Thompson poignantly posted a comment from someone who struggles with day-to-day poverty who said, “Poverty is bleak and cuts off your long-term brain. It’s why you see people with four different babydaddies instead of one. You grab a bit of connection wherever you can to survive.”

As a pro-lifer it was easier to judge those who seemingly flaunted their immorality instead of trying to understand what drives them. They deserved what they got, as far as I was concerned, because it was their choices that were holding them back. It turns out that it’s not always their choice. The cold, hard reality is that sometimes life happens to us, choices are limited and, as the writer stated above, we grab a bit of connection wherever we can survive.

It’s no surprise, of course, that crime rates and drug abuse are higher in areas where poverty is persistent. And unfortunately, the conservative approach to crime and poverty has been to get even tougher on those who commit it.

The pro-lifers demanding that abortions be stopped often only put down their signs long enough to walk across the street and hold up signs demanding stiffer sentences for criminals and a fast track to death penalties. As a result, the United States has the highest rate of incarcerations than anywhere in the world at 2.2 million. 60 percent of those are from African-American and Hispanic communities, says the Center for Community Change. Two thirds of those jailed report incomes of under $12,00 prior to their arrests. It has me asking exactly what it means to be pro-life? What kind of life is it? Is it one we pro-lifers would choose to live?

And what about the lesbian, gay, bisexual or transgender kid? Statistically, as I’ve written before, anywhere from 3.1 – 6.8 percent will fall somewhere in one of those categories. The National Gay and Lesbian Task Force reports that 20-40 percent of homeless youth in America are LGBT. Though anecdotal, I’ve heard from friends who work with homeless youth in the Bible belt that that number can get as high as 80 percent in some locations. Ironically, those with “religious values” are usually on the front lines of the pro-life picket lines, while tossing their own gay kids into street to fend for themselves. What does pro-life mean to those parents, if not taking care of our youth and the most vulnerable among us?

In spite of all the bleak statistics, or perhaps because of them, I remain very much pro-life. My version of pro-life doesn’t stop conception. I believe pro-life means we as a society are responsible to help people succeed by empowering them through education and providing the resources that will ultimately make society stronger. I realize the first response from most “pro-lifers” is, “What about the cost?” Followed by the second question, “Aren’t you creating a society dependent on the government?”

The amount of money spent on prisons is around $80 billion annually. We also spend around $668 billion annually to support 126 welfare programs in the U.S. Since our prison systems aren’t set up to rehabilitate and our welfare programs do little more than sustain, and barely that, we are perpetuating the problem. Contrast that to the more than $1 trillion dollars Americans owe on student loans. I’m not a politician and I’m terrible at math, but If the government put more toward education, rehabilitation, and a concerted effort to end poverty through fair wages and equal opportunities, empowerment programs would pay for themselves.

More than pro-life. I am pro-human. I believe that we are good at the core, which is supported by research, and we are driven beyond survival to discover our purpose and passion. Yes, let’s save the babies, when possible, but in the process let’s not forget to respect the babies’ mothers and give dignity to people no matter who they grow up to be.

This is BS. You’re giving yourself an excuse to judge and not act.

Abortion, like most other things in life, is only as complicated as we make it. Much like a lie we tell others or ourselves, the further we remove ourselves from the truth, the greater the complexity becomes. But this presupposes that truth is an actual thing, and not some man-made concept. For those who doubt, I have this question:

If objective truth did not exist, could you refute it without coughing on the foot in your mouth?

In so far as the pro-life issue, it is complicated but not really … Life is life. So basically what people are saying is that a child conceived in a poor family is not worthy of life? Economics makes that life less important? “Are these conservatives and their “no welfare” values prepared to take care of these kids? I resent this misrepresentation and you know darn well it’s wrong. As an Evangelical , you know very well what your community does for the poor. I’d also like to ask you what you have done for the poor women who have… Read more »

I am a former evangelical. In my 25 years experience as a minister and intricate part of this group, very little was done to help the poor. Most of the money raised went to build bigger buildings, pay pastors’ salaries and spout political-religious ideology, which I dare say most evangelical Christians don’t even know is NOT part of the Gospel message. Many cite Old Testament Scriptures to justify death penalties and Reaganomics to justify capitalism on the backs of the poor.

The point of this article wasn’t to “slam,” but to call out the inconsistencies in the pro-life movement.

And most people who are pro choice would never think of giving men ANY choice in becoming a father.

I agree Zygor. I personally know 5 men who wanted the child and would have taken full responsibility for the child but were denied because it was “her” choice. Many many men through the years would have done the same but were not given a choice.

Men can’t have a choice because pregnancy can and frequently DOES kill and this is something people choose to ignore. A woman dies of pregnancy EVERY NINETY SECONDS.To give men a choice is to literally give a man the power of life and death over any woman he impregnates and immediately makes a slave of her. And what happens if she refuses? Is she incarcerated? Chained to a wall? How does this actually work? It amazes and saddens me that so many men have so little understanding, empathy or gratitude for what women go through to become parents that they… Read more »