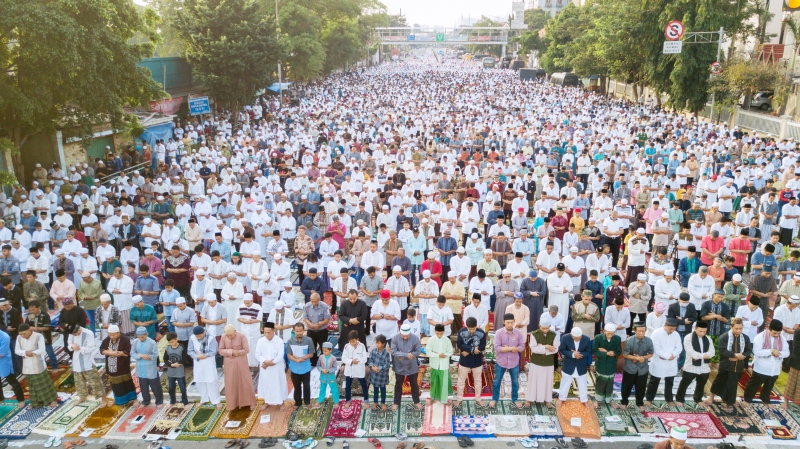 Indonesian groups considered as political Islam include the Islam Defenders Front (FPI), the National Movement to Safeguard the Indonesian Ulema Councils Fatwa (GNPF-MUI), Hizbut Tahrir Indonesia and factions in the country’s largest Muslim organisations, the Nahdlatul Ulama and Muhammadiyah. They all have the desire to rule the society with ideals derived from interpretations of Islam. This has prompted political Islam to put forth its aspirations, generally perceived as undemocratic, through democratic ways.

Previously, political Islam had little participation in Indonesian democracy. On several occasions, these groups even campaigned for ideas opposing democracy. For example, in 2013, FPI leader Rizieq Shihab rejected the idea of general elections, telling Muslims that supporting democracy was as bad as eating pork.

Political Islam had almost always been on the fringe of Indonesia’s politics. Its inability to build a coalition of Muslims from all walks of life and persistent internal fragmentation had rendered political Islam incapable of mobilising significant influence.

After the fall of Indonesia’s New Order, or Reformasi, researchers have observed the rise of the conservative turn. The aspiration to expand the influence of Islamic law in the public sphere has been voiced more frequently and gradually garnered more support.

However, the rise of the conservatives does not necessarily end the exclusion altogether. Even after Reformasi, political Islam in Indonesia still experiences political exclusion. Political Islam has often been portrayed by the media, pro-democracy activists, analysts and political rivals as a group that harms democracy and pluralism.

Research has found the group attracted stigma because of its beliefs. The state, scholars and civil society often treat followers of political Islam as citizens whose behaviours and ideas are problematic, thus needing correction. Moreover, it is not easy for political Islam to get access to formal political institutions.

Amid the prevailing democracy and diversity narratives post-Reformasi, these portrayals have made political Islam look like a bunch of deviant people with unreasonable demands. On the other hand, political Islam harbours great suspicion of the narratives of democracy, tolerance and nationalism.

Last year and this year signified a new turn. Indonesia saw a string of large demonstrations called Defend Islam Action (Aksi Bela Islam), where political Islam gained momentum and huge public sympathy. This has pushed more established actors in the democracy arena — legislators, political parties, elected politicians, bureaucrats and businesspeople — to take them into account and regard their demands seriously.

To overcome the exclusion, political Islam utilised democratic claims. When its supporters rallied to voice their demands, political Islam expanded its repertoire to include freedom of expression. Another is “everyone is equal before law”, which gives justification for political Islam to pursue its interests using legal avenues.

Political Islam has also appropriated the state ideology, Pancasila, and nationalist jargon to defend itself from rivals’ accusations of harming Indonesia’s unity.

These manoeuvres allow political Islam to pursue greater participation in Indonesia’s political arena. Its members acknowledge the rules of the democratic system in the hope of getting recognition as legitimate political actors in the country.

Nonetheless, their compromise in embracing democracy contains ambiguity. The decision to abide fully by democracy requires them to forget about some of their conservative ideas. But without entering the democratic arena, political Islam’s aspirations would not get much support.

Amid this changing political landscape, attempts to counteract the conservative turn need a new formula. But it seems the government and other democratic powers have failed to respond intelligently to this development.

They are doing what they have been doing: controlling political Islam by excluding them. They do this by reproducing negative depictions of political Islam: anti-democracy, favouring violence, and threatening the national ideology.

These portrayals provide justification for the government to limit political Islam movements. It disbanded Hizbut Tahrir Indonesia without trial using a government regulation that could also affect other mass organisations.

Limiting political Islam is understandable because many see its involvement in democracy as a mere strategy to infiltrate democracy. But such exclusion risks a failure to see political Islam’s willingness to compromise with democratic rules. How far will this compromise go? We must wait and see.

Pro-democracy agents need to learn more to develop a better strategy in this new landscape. It is clear that moves to treat political Islam as a fringe actor tend to be counterproductive.

It would likely harden political Islam’s feelings of exclusion despite having shown willingness to follow democratic rules. This could stunt political Islam’s commitment to get involved in democracy, and in turn might open more paths to radicalisation.

Negative labelling of political Islam, therefore, should be ended. This is not only because it fails to delegitimise political Islam in the eyes of society, but it also gives followers reason to unite and harden their identity.

Instead of treating political Islam’s followers as people who do not have any place in democracy, the government, democracy activists and researchers should think about how to encourage political Islam to compromise further and accept democratic ideals.

Make democracy the sole domain where political decisions are deliberated, so political Islam does not have any choice except to enter and compromise. Or instil democracy deeper in the society so citizens are not easily lured by actors that promote undemocratic ideas.

Facebook1TweetPinEmail1Shares2
wpDiscuz
0
0
Would love your thoughts, please comment.x
()
x
| Reply
Share this ArticleLike this article? Email it to a friend!
Email sent!