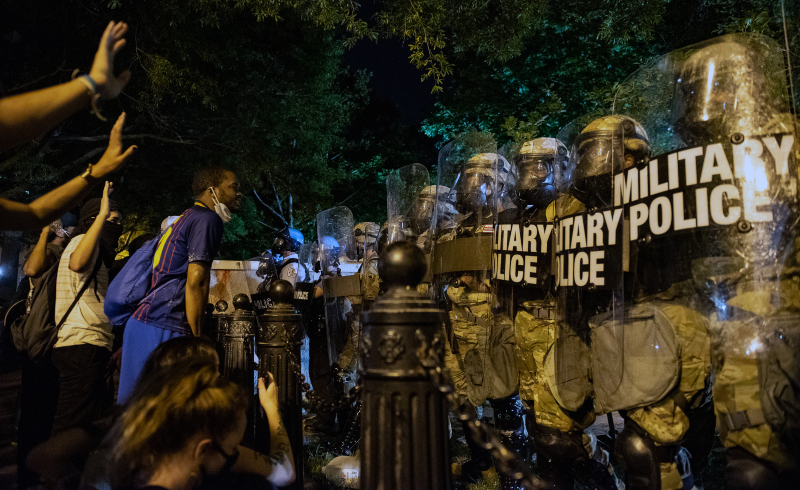 It is said that Baba Yaga, an ancient Russian wise woman, lived in a hut deep in the forest. She was almost always stirring a pot and waiting to tell the truth to whoever visited.

One day, a young man knocked on her door.

“Are you here on your own or were you sent by another?” asked Baba Yaga.

“My father told me to come,” said the young man.

Baba Yaga threw him in the pot and cooked him. She kept stirring and waiting, until a young woman visited.

“Are you here on your own or were you sent by another?” Baba Yaga asked.

“I’m here on my own,” the young woman answered.

Baba Yaga threw her into the pot.

A third visitor, a young woman confused about the world, approached the hut.

“Are you here on your own or were you sent by another?” Baba Yaga asked.

“You’ll do,” Baba Yaga said and invited her into the hut to hear the truth.

So much is up in the air. Protests. A pandemic. The economy. A fascist president provoking his base with dog whistles about “law and order.”

Understandably, we search for certainty in the confusing muck. We want a role to play, an action to take, an escape route. We want to figure out who is good and who is evil, what is right and what is wrong. Part of us thinks that if we’re certain, we’ll be safe. If we know what’s going to happen, we’ll be okay.

Meditation teacher Tara Brach calls the part of us that wants certainty “the controller.” The controller is “the ego’s executive director, the self we believe is responsible for making decisions and directing the course of our lives. The controller obsessively plans and worries, trying to make things safe and okay, and it can give us at least a temporary sense of self-efficacy and self-trust.”

But—as it always is—the truth is in the uncertainty. It’s down there in the muck. It’s in noticing the urge to control and then letting go. It’s in the “I don’t know.”

And the hardest thing to do in life is to admit that “I don’t know” but still move forward, still do “the next right thing,” still fight for what is right.

Four cops killed George Floyd. But I don’t know if Floyd’s family will ever feel like justice has truly been served.

Policing has racist roots. It evolved out of slave patrols, squadrons of white volunteers who used vigilante tactics like lynching to enforce slavery laws. But I don’t know if we’ll be successful in dramatically changing how cops do their jobs.

Police budgets have been growing for years while public spending has been cut on things like education, social services, and public health. But I don’t know if we’ll be successful in defunding the police.

Most positive societal change (the 8-hour workday, the Civil Rights Act, etc.) would not have happened without masses of people rebelling, including violence against property. But I don’t know whether the vibrant, multiracial protests are going to lead to progress.

The real “looting” is corporate America getting a $4.5 trillion bailout while more than 40 million people are out of work. America’s billionaires have made more than a collective $434 billion during the pandemic. But I don’t know whether Congress is going to help people who need it most.

Coronavirus is still killing over 1,000 people in the U.S. every day. But I don’t know if and when a vaccine will be available.

As hard as it is, we should hang around in the messiness of “I don’t know.” Otherwise, we harden and get rigid and close off and miss the truth that’s always emerging in the present moment.

At the same time, we must pick a side and engage somehow. We must protest or donate to legal funds or check in with friends or simply care for the vulnerable people in our lives. These are the types of moments that are historical inflection points. The rest of our lives will be shaped but what happens next. We must shake off the capitalist idea that we’re not in this together, that our freedom isn’t determined by the freedom of others.

I try to remember that people have been fighting for justice for a long, long time. And, like the visitors to Baba Yaga’s hut, we’ve still fought even though the future is unknown.

Get my free ebook on meditation

My ebook, How to Get Out of Your Head, will help you start or stick with a regular meditation practice. Get it for free here.

Facebook11Tweet1PinEmailShares12
wpDiscuz
0
0
Would love your thoughts, please comment.x
()
x
| Reply
Share this ArticleLike this article? Email it to a friend!
Email sent!