An acrostic is generally a poem or phrase in which the first letters spell out a word. It is Father’s Day. How many of these old sayings apply to you? How many apply to your dad? Acrostics below were created by Don Mathis; axioms were written by children and fathers across history.

There’s something like a line of gold thread running through a man’s words when he talks to his daughter, and gradually over the years it gets to be long enough for you to pick up in your hands and weave into a cloth that feels like love itself. – John Gregory Brown

Directly After a Deity

Blessed indeed is the man who hears many gentle voices call him father! – Lydia M. Child

A truly great man never puts away the simplicity of a child. – Confucius

Father of fathers, make me one, A fit example for a son. – Douglas Mallooch

The child had every toy his father wanted. – Robert C. Whitten

Every parent is at some time the father of the unreturned prodigal, with nothing to do but keep his house open to hope. – John Ciardi

I didn’t know the full facts of life until I was 17. My father never talked about his work. – Martin Freud, son of Sigmund Freud

Middle age at forty-five, what next, what next? At every corner, I meet my father, my age, still alive. – Robert Lowell

His father watched him across the gulf of years and pathos which always must divide a father from his son. – John Marquand

The fundamental defect of fathers is that they want their children to be a credit to them. – Bertrand Russell

A man knows when he is growing old because he begins to look like his father. – Gabriel García Márquez

I cannot think of any need in childhood as strong as the need for a father’s protection. – Sigmund Freud

All fathers are invisible in daytime; daytime is ruled by mothers and fathers come out at night. Darkness brings home fathers, with their real, unspeakable power. There is more to fathers than meets the eye. – Margaret Atwood

Perhaps host and guest is really the happiest relation for father and son. – Evelyn Waugh

A man’s desire for a son is usually nothing but the wish to duplicate himself in order that such a remarkable pattern may not be lost to the world. – Helen Rowland

My father gave me the greatest gift anyone could give another person; he believed in me. – Jim Valvano

My best training came from my father. – Woodrow Wilson

Be kind to thy father, for when thou wert young,
Who loved thee so fondly as he?
He caught the first accents that fell from thy tongue,
And joined in thy innocent glee. – Margaret Courtney 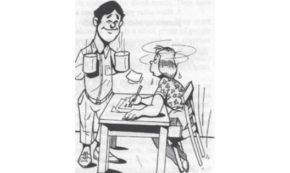