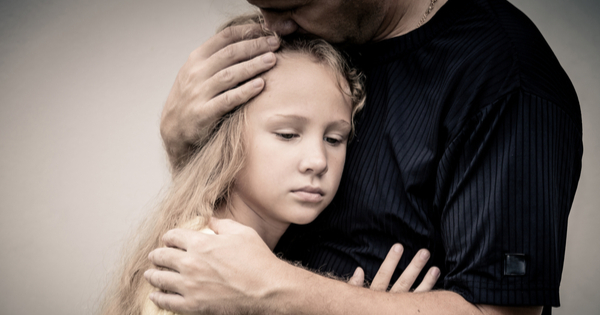 If Bo Burnham’s Netflix movie Eighth Grade had a sequel, there’s no doubt the charmingly awkward dad would get to speak with his not-so-charmingly awkward daughter about puberty. And dating. And maybe sexual harassment. Now that’s a movie I would rush to see because for every #MeToo article I read, I wind up wondering: “Where do dads fit in?”

Granted, as someone who went through high school with just my dad (and brother), I think about this a lot. But dads are notably missing—from media stories that talk about preventing violence against girls to actual conversations with daughters about dating and sex. This kind of role isn’t for all men. Some dads are absent, abusive, or even perpetrators of sexual violence. However, not engaging with the millions of fathers, or father figures, who are a positive influence is a missed opportunity.

During adolescence, girls face a fuzzy line between sexual independence and sexual exploitation. It’s far past time to help dads communicate with teen girls about these topics. Educational programs for dads to talk, find resources, and learn how to support their daughters’ health and sexuality are greatly needed.

According to CDC, one in four girls in the U.S. experience dating violence or stalking before the age of 18. About one in nine girls in high school experience sexual dating violence. We know that conversations between fathers and daughters during this time are crucial. Yet, young women receive little sexual health or relationship guidance from their dads.

Researchers found that while less than 10 percent of young women said their dads had prepared them well for dating and sexuality, over 80 percent wish their dads had said or done more. Unfortunately, dads face a lot of barriers. Some dads may not think it’s their place. Others don’t know about “girl stuff” or choose to ignore that their daughters are maturing (no longer “daddy’s little girl”). Some daughters aren’t close with their dads or feel uncomfortable speaking with them.

Still, the need exists. Last October, NPR reported that Washington Post columnist Monica Hesse received 500 hundred emails in the first 24 hours of publishing her article, Dear dads: Your daughters told me about their assaults. Here’s why they never told you. Helping dads discuss healthy relationships and sexual health with their daughters early and often can change this.

Positive father-daughter communication builds trust and encourages daughters to share their feelings, concerns, and experiences. Further, it can create a model for how girls communicate with their romantic partners and weigh decisions about sex. Open conversations with dads can inspire open conversations with partners about sexual decisions. This sets the tone for healthy relationships without harassment or violence.

Dads aren’t always visible in the #MeToo movement, but they should certainly be involved in addressing sexual harassment and assault. They can learn to talk with their daughters about good relationships. They can teach their kids about consent and point out good and bad examples. They can share advice about dating. It’s important to note that boys—who can be victims or perpetrators of teen dating violence—also need support from male role models.

Most importantly, dads can listen and know how to be there when things get awkward or scary or abusive—a tragic reality for too many teen girls.

Existing programs are rare. Because We Have Daughters® (BWHD) from Men Stopping Violence, a non-profit in Georgia, is one of the few initiatives to engage dads and daughters within a violence prevention context. BWHD offers trainings where dads and young daughters work on leadership, decision-making, and listening skills. They even talk about sexism and other oppressive realities girls and women face. This model should be expanded to many types of settings (schools, religious organizations, PTA meetings) and reinforced as girls get older to include teen dating and sexual health education.

On a broader level, Futures Without Violence has started the Engaging Men initiative. It focuses on men leading by example and mentoring boys to prevent relationship abuse, harassment, and sexual violence. To reach more men, the initiative could offer a similar program that engages dads and mentors daughters around these issues. Both BWHD and Engaging Men have found success in building networks of dads. We can use their frameworks to bring together dads of teen daughters to further promote healthy relationships and support girls.

Post-Father’s Day is a fitting time to honor and re-assess the role dads play. Dads do fit in when it comes to improving the sexual and social health of teen girls. It can just be challenging to find out how, when, and where.

As a parent, you can collaborate with schools and community organizations to host trainings for dads to discuss young adult relationships and girls’ sexual health. As a dad, you can participate and learn. Trainings are an excellent way to share resources like Dr. Todd B. Kashdan’s Letter to Dads of Daughters on a Sexual Misconduct Epidemic.

So whether you’re a mom or dad, coach or leader, start discussing ways to engage men in preventing violence against girls. Educational programs that help dads with these traditionally tough conversations are a great place to start.

Caroline Conena is a health communications professional. She is currently getting her Master of Public Health at Harvard University and works at Brigham and Women’s Hospital as Digital Project Manager. Like many daughters, her dad is her #1 fan. You can contact her at [email protected]