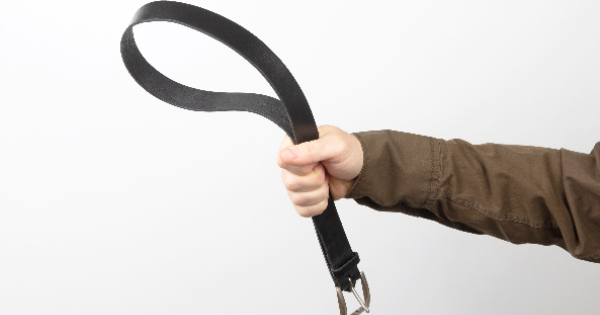 For hours, I used to hide in a basement closet or way up high in my climbing tree, when mom would utter those words of terror … “Just wait ’til your father gets home.”

Just recalling those words open old wounds, the pain far too real. That phrase triggers boyhood memories of doing something wrong and the frequent firestorm consequence that usually went far beyond a ‘normal’ spanking.

My dad and mom, themselves raised in volatile and violent homes — unfortunately perpetuated the cycle, physically and emotionally — disciplining the way they knew. In our house corporal punishment ruled the day. Spankings were routine, in my case far too frequent occurrences, and were delivered harshly and angrily, volcanic outbursts of parental frustrations.

I still shudder when I think back to my dad’s rage. There were no elements of teaching in these punishments; soundly chastised, we children were left to lick our wounds, many times unsure what lesson was to be learned in the first place, other than playing the battering ram role for the firestorm of dad’s and mom’s venting of frustration. When we were younger, mom routinely carried a wooden spoon for when my sister, brothers, or I crossed a line not so consistently defined. My younger brother and I were on the receiving end the most, but because I was older than he, I took the greater brunt, the spark that lit the fuse.

These punishments were not always meted out in private. Spankings occurred in public, in front of family, even friends witnessed these scenes first hand. It was mortifying. I firmly remember how totally humiliating, when on the cross country vacation, I was spanked literally in front of hundreds of people as we stood waiting for Yellowstone’s Old Faithful to erupt. Dad erupted before the geyser. My crime as I recall, just a nine year old boy case of ants-in-the-pants, wanting, needing to be on the move, and I dared to move from the earmarked viewing spot.

I was the hyperactive, attention deficit bad kid, the one who spent more than a few school recesses either writing out 200 lines of “I will sit still and pay attention,” or who stood nose to the school façade’s exterior brick wall, while my schoolmates gleefully purged their pent-up energy.

I learned early that punishment was a routine part of young life, the physical nature and emotional intensity of each episode, left me wondering if I was just “Misunderstood” or just plain old “BAD.” My early school experiences can only be described as borderline torturous. A boy who just could not sit still, I had trouble focusing in school. 1970s parents and educators either did not have the skill set to diagnose and cope with what we know now was a classic case of Attention Deficit Hyperactivity Disorder (ADHD), or fervently believed and subscribed to deal with little boys like me with in the old-school philosophies and methods of the time.

“Needs improvement in exercising self-control” was standard feedback on report cards and in parent-teacher conferences. So, my elementary schooling was filled with punishment, humiliation, and shaming. And, when I was in trouble at school, I could count on further punishment at home. By the fourth grade, my mom mostly left physical punishment for my dad.I knew this fear and dread all too well. As I got older, the spankings got harder, and the objects used got bigger. It started with a heavy eighteen inch ruler, and then a leather belt, wickedly thick and heavy. The ruler housed prominently on display, a constant reminder, hung on the hallway wall outside the children’s bedrooms.

When I think back to the time in my youth when I felt happiness, I think of … everything in motion. My playmates were mostly a ball, glove, racket — toads, minnows, and crayfish that I would try to catch in nets — rocks and sticks that built dams in streams  — trees for climbing, woods for exploring, hills and fields to traverse, my beloved bikes. My playground, the earth and sky, every day filled with adventures of my own creation. I lived largely within myself and my own world.But there was a constant, underlying fear eerily present, when is dad going to find the need to spank the ‘devil’ out of me?

As a boy, I was nervous, emotional, stressed out, and quick to anger. I lived in so much fear that the next punishment would be far worse. Anxiety gnawed at me as to when I would again face dad’s wrath. When mom pronounced my sentence to wait for dad to get home, looming dread endured for hours. Spanking conditioned me to withdraw and avoid pain. As I grew, the trick became not to be the target of a public shaming and avoid being the target at all costs. I conditioned myself to suppress emotional pain. Boys were expected to endure their pains and trauma of the world in order to maintain toughness. Secretly, I swore to never let anyone see me cry, even when hurt, scared, angry, or sad. I felt inferior, out of place.

The scars are still there. I’ve carried those scars with me. They’ve affected how I parent my children, the relationships I’ve had, and what I’ve thought about myself. I swore that I couldn’t, wouldn’t repeat the cycle. However, when my children grew old enough to discipline, my first instinct was to spank them. I had grown up that way, I didn’t know any other way. That’s the cycle that happens. You do what you have known. Ingrained in me was that physical punishment is the best form of discipline.

However, despite my commitment, I spanked my children on occasion, when they were younger. I defaulted to an automatic response. Anger, my anger took over. I reacted in a physical way. Then I broke the cycle. I saw the truth and my eyes were opened. My second son was six at the time, and he impulsively, instinctively went to retrieve a ball that rolled into an area that was off limits. Yes, he did something wrong. But it scares me that my reaction in that moment, I became my dad. I was my dad. I hauled my son off and screamed my guts out, but when in a split second I captured the fear in his eyes of what I was about to do I suddenly realized I was my dad. The bad side. The out of control raging maniac venting anger.

In an instant I stopped to realize how my life had been so dramatically affected, and I didn’t want my sons and daughter to deal with those scars in their lives. I could no longer replay such a generational family story. “Just wait till dad gets home,” in reality, should be a celebratory phrase for a child to experience the magic of a father’s presence, with positive, productive interaction. No more hiding in closets or climbing a tree to escape the inevitable reality of chaos and dysfunctional meting out of punishment. I am not saying that our children do not need consequence for inappropriate behavior, but what I am saying that outrage and violence solves nothing, teaches nothing other than fear. True discipline is about teaching, so that our children do not repeat the same poor decision, undesired action, mistake. Daddy coming home to deal with misbehavior should be about constructive dialogue, getting to the roots of the wrong, guidance and teaching, with natural consequences from which there is accountability, restoration, and learning. Waiting for dad’s arrival musn’t be about fear of the impending firestorm of rage and physical harm.

Now that my kids are older, I am so thankful that I righted things for the better at that critical moment, that the cycle ceased, and I moved forward to deal with my own scars and anger in a purposeful and professional manner.

Yes, there was certainly much good in my childhood, No one can say my two parents didn’t try. I love them. We had essentials like shelter, food, clothing. My dad worked hard to provide, sometimes working multiple jobs and traveling for work. Mom was a homemaker and supplemented my dad’s income by babysitting, freelance writing, even sewing for others. Dad and Mom valued education and maintained high expectations for their children.

We were a church going family. Like most families we had our hardships, including several prolonged financial difficulties that left us on the verge of applying for food stamps, yet thankfully, we were rarely left wanting. I am thankful to my parents and cherish our relationships today. I love them, and I forgive them. I empathize with their own turbulent upbringings. I am so very thankful that they have been outstanding grandparents to my children. But there does remain pain and regret and want. I know we cannot go back, so we only look back and do everything possible to move forward. A note on my father … I love him dearly despite his temper and his heavy hand I experienced all those years ago. He is a good man with a good heart. He has apologized and wished that he had not repeated the cycle during my upbringing.

Some critical notes on research pertaining to the use of corporal punishment and the necessity to address its use as many, many nations have done leading to its banishment:

• Various markers of mental health (e.g., depression, alcoholism, suicidal tendencies, self-mutilation, self-esteem) were measured in the studies chosen for this review and all studies found corporal punishment to be linked with a poorer quality of adult mental health. For example, harsh physical punishment predicted both alcohol and depressive disorders when children perceived the punishment to be unfair and inconsistent (Holmes & Robins, 1987).

• Even after controlling for low socioeconomic status, children who experienced corporal punishment in adolescence (e.g., almost half of U.S. adults) were at increased risk in later life for depression, suicidal thoughts and dependency (Straus & Kantor, 1994).

• There is a lack of theoretical works to help identify the processes by which corporal punishment may affect mental health, but coercive discipline techniques have been associated with decreased confidence and assertiveness in children and increased feelings of humiliation and helplessness (Baumrind & Black).

• A USA-based studyexamined children’s levels of cortisol (a hormone released in response to stress) before and after a stressful experience (repeated separation from their mother, combined with the presence of a stranger). The study found that the more often children were “spanked” or “smacked” the higher their levels of cortisol after the stressful experience, suggesting that more frequent experience of corporal punishment made children react with more stress to a potentially frightening event. The authors suggest that the children were vulnerable to unexpected, challenging, or novel life events and could have difficulty dealing with stress in the future.

The Committee [on the Rights of the Child] defines “corporal” or “physical” punishment as any punishment in which physical force is used and intended to cause some degree of pain or discomfort, however light. Most involves hitting (“smacking”, “slapping”, “spanking”) children, with the hand or with an implement – a whip, stick, belt, shoe, wooden spoon, etc.

M.R. Troy is a husband and father. A retired educator and coach, he now serves as a freelance writer, copyeditor, and consultant.

Facebook27Tweet1PinEmailShares28
wpDiscuz
Share this ArticleLike this article? Email it to a friend!
Email sent!