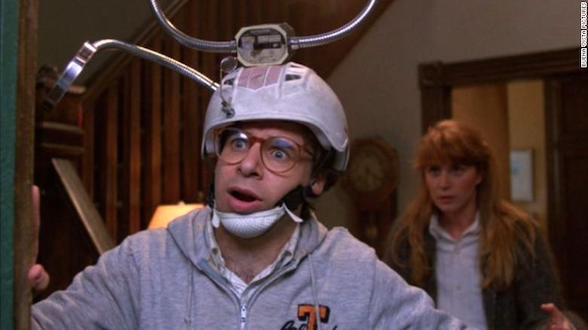 For this week’s installment of Scary Daddies, we’ll explore the mad scientist archetype. In the Disney pantheon of characters, there’s a standout amongst the many wacky science fiends.

That character is Wayne Szlainski of the Honey, I (fill in the blank) franchise. In the first film, Honey, I Shrunk the Kids (1989) we met the affable Wayne Szalinski on the verge of perfecting his shrinking machine.

We know the plot: his and the neighbor kids are accidentally shrunk by the machine and madness ensues.

Behind the miniature adventures looms a big problem: mom and dad are not happy and the kids are bit unsupervised. In fact, early in the film, we learn that Diane, Wayne’s wife, had spent the previous night at her mother’s home to be away from Wayne’s machinations, and to focus on her real estate showing that day.

We see more clues of the family’s instability as the film continues: eldest daughter Amy is fully aware of her parents’ strife, Wayne continually promises Diane that “things are going to be different around here,” and Diane’s frustration often swerves into anger.

Despite welcoming a new baby in the second installment, Honey, I Blew Up the Kid, the marital strife remains, and is exacerbated by Wayne’s invention ballooning the toddler to giant size.

By the third installment, Honey, We Shrunk Ourselves, Diane (coincidently not played by the same actress—maybe even Marcia Strassman was done with Wayne’s antics) is verging on harpy status. From the start of the film, she is more than eager to get away for a girls’ weekend vacation, and doesn’t hide her frustration with Wayne in every scene.

Wayne’s consistent character trait is his obsession with his inventions. They are either almost done, or out of control. When they do work, they backfire and put his family in danger. He’s technically a workaholic and can’t separate himself from his projects.

Thankfully, the lovable Rick Moranis plays the character, and through his portrayal, we see several glimmers of a good man simply trying to provide for his family. Though he may be obsessed with his work at the expense of his wife’s sanity and his children’s well-being, Wayne is smart enough to be self-aware, and he’s certainly not a deadbeat.

What we learn from Wayne however, is to not let our work consume us. Even if the work is our own creation—the output of our passion—there must be healthy boundaries. If not, the obsession grows to a giant size, only shrinking us, and our families, in the process, no machine needed.

Taylor García is the author of the novel, SLIP SOUL from Touchpoint Press.

García's stories and essays have appeared in numerous journals and magazines, and he holds an MFA in Writing from Pacific University Oregon. He lives in Southern California with his family.