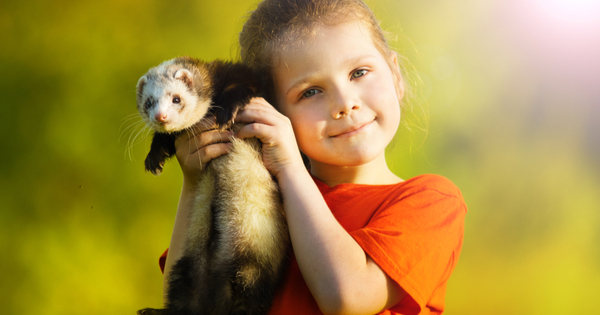 I’m not talking dogs and cats, I mean the little things living behind glass in their bedrooms. This is inevitable.

Trust – eventually your kid is gonna beg for some disgusting, tiny rodent they saw on YouTube and you’ll need to consider what best small pets for kids you’ll tolerate.

While you might have a knee-jerk reaction and scream “no”!, consider that pets bring great lessons in responsibility, compassion and even foster conversations about life and death.

Mine has become a household where new pets are demanded every few months. In most cases we just out-wait the kids’ flagging interest and the obsession passes.

But during our last trip to the pet store, I asked the person, “Why can’t there be a month-to-month rental service? An AirBnB for pets, if you will? I’m even fine spending $50 a month. Just let me give the thing back when my kid’s interest has flagged and I’m already tired of being the one to nag her about feeding the damn beast.”

“Do you now how many animal rights activists would be at our door if we did such a thing,” the guy resembling the comic book store owner from the Simpsons responded. “They’d claim we were stressing the animals too much.”

Meanwhile, all of the best small pets for kids are probably happiest being ignored and just gnaw on their wood chip in peace…as long as we feed them.

So, dear reader, with an endorsement for going ahead and letting your kid have a small pet, I give you a round-up of the top 11 best small pets for kids that’ll be requested by your munchkins. Lots of considerations involved (usually lifespan) that could inform your decision…since you’ll inevitably be the one to take care of it.

Can you believe that? But think about those gargantuan things you see living in koi ponds and the like. They’re voracious eaters and growers. So consider these things just live and live and grow and grow. You might consider other fish (sometimes gold) that aren’t seen as Elmo’s pet.

Eats – I mean, you know this, right? Flakes. Couldn’t be easier. But also – to do it right – use a high quality goldfish food as a complete diet. You can supplement their diet with skinned, blanched peas and freeze-dried bloodworms.

Shelter – You can’t just fill a bowl with your tap water. These fish need a minimum 10 gallon tank (for one fish) with a filter of de-chlorinated water. (I admit I had a beta fish for a year that lived in a classic fish bowl and that was great. But you can only have one. They’ll kill each other.) To really do it right, you need to partially change the water (replacing 25% of the water) between every couple of weeks and a complete water change every 1-2 months.

Before adding your fish, you will need to build up the beneficial bacteria to create a balanced environment that keeps ammonia overgrowth under control.

Goldfish never stop growing. They can grow to be up to three pounds by the time they’re 15 years old. (you’ll need a much bigger tank before then).

Good for kids of all ages. (…but you’ll be doing all the work.)

Shelter These lovable, social, cutie pies need large cages that have lots of exercise and stimulation. They need to be able to hide, but they cannot climb. (Don’t you dare give them an exercise wheel. They’re bad for their backs.)

Most of all, they’re social beings and need to be in a little gang of guineas – at least two.

Keep in mind, these adorable little fuzzy guys are definitely fragile. Being dropped or squeezed too much will kill them (I speak from experience) and they often become ill and die. They can also by nippy, especially the females. And they’re truly nocturnal animals, so they’ll be active and noisy at night. Luckily, you can keep them solo and they’re perfectly fine. (But match them with their soul mate…or just sex mate…and you’ll have babies within two weeks!)

For kids 8 and up. (Or 4…like we first did with our kid…before the top was left off the cage during a long weekend away and we came home to find that “Coco” had snuck out, pooped in every corner of our apartment, and probably disappeared down one of our many big holes to go live his best life in the wilds of the city. The kids still ponder, “I wonder where Coco is?” and we let them fantasize about his adventures in the city as a single hamster. I should write that into a movie. Noted.)

So unless someone forgets to feed the poor thing or he freezes to death because you don’t pay enough attention to his heat lamp, you’re making a double-decade commitment.

Diet – This is a killer (pardon the term) but geckos like to hunt and prefer live food. So you’ll be making regular trips to the pet store for live worms and crickets. You can trap your own cockroaches, but they’ll only eat live things that can fit in their mouths. They have table manners, after all. They’re not little piglets like my children.

Shelter – Their terrarium requires rocks or wood for hiding and climbing but most of all needs a heat lamp set at 75-85 degrees since they can’t regulate their own body temperature.

Shelter – Then need a cage for the indoors with a solid floor since they lack foot pads. They’ll need a sheltered area for sleeping

Rabbits need a lot of exercise whether it’s indoors (keep away from your dogs and cats) or the outdoors (keep it enclosed and protected from hawks and foxes…obvi.) And make that enclosure big enough for two. Rabbits need a companion because hosting a solo hopper is a recipe for a lonely, withdrawn, unhappy bunny.

They can be litter-box trained if you want them hopping around your house…which is kinda cute. Believe it or not, you could spay or neuter a bunny (which makes them less aggressive). And heck, you do that to a dog or cat and they can live the same length of time. So…why not?

Shelter – They need a wire cage with a solid base and multiple levels for climbing and hiding. HOWEVER, they prefer to have a run of your house. So good luck. And after having gone through baby-proofing, you’ll need to ferret-proof…not for stairs and electric outlets but for small spaces. They can get stuck, those little rascals.

Ferrets are very playful and interactive, making YouTube videos so very appealing to your kid you’ve left alone on their iPads to watch the millions of kids who have “meet my pet” channels. But they really do sleep most of the day. Also? Let’s be honest: they smell.

Diet – Depends on the breed – could be worms, insects, fruits & veggies or just commercial pellets.

Shelter – Provide a terrarium room y enough for rocks for perching upon, dry areas for burying and shallow water for re-hydrating. Most of all, they also cannot regulate their temperature so they need a heat lamp.

Shelter – A multilevel wire cage with a solid floor and a regulated temperature of 65-75 degrees. Further, they like to bathe in dust. That is not a typo. They bathe in dust instead of water and they need a sturdy bowl or deep dish or “dust house” for their bathing thrice weekly. And you need to get them special bathing dust. Aren’t they just the little divas?

These celebrities of the intrawebs, suddenly hyper-popular thx to child influencers convincing kids (like mine) are raging in popularity. They’re gentle, fragile, and could bond with the owner. But these might be more for kids who watch rather than interact with their small pets. And of course they’re nocturnal. Not sure they would’ve made a list of best small pets for kids in 2019 thanks to social media. But they’re probably here to stay for awhile. Until kids find the NEXT exotic rodent to over-popularize.

So just think about that. Except also? It’s a hermit crab. Couldn’t be easier. Definitely an option for best small pets for kids.

Shelter – Need a terrarium regulated around 75 degrees with sand to dig and rocks to climb.

Good for kids of any age.

Diet-  Pellets and food blocks along with seed mixes.

Shelter – A large aquarium-type cage with tunnels and places to hide.

They’re sensitive to their environment and can be easily sickened. Like even humidity can give them respiratory and fur problems. They’re usually not aggressive, but they can nip, like all rodents. AND – they’re highly social, so it’s best if you have a pair.

Despite their failure in the P.R. & branding department, rats make great pets and definitely deserve to be considered one of the best 11 small pets for kids as they’re social, docile and curious.

What have I missed, y’all? Any other cute and cuddlies, cute and scaled, cute and slimy small pets you’d recommend for kids? Would love your input on even more best small pets for kids…