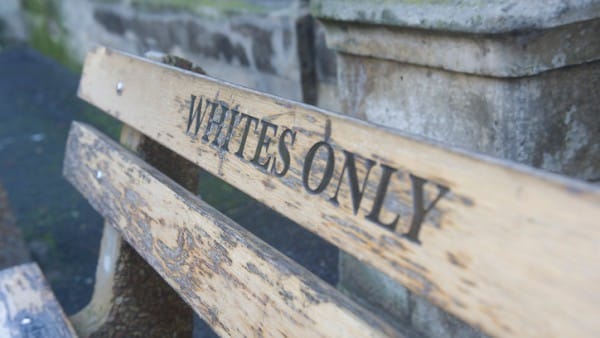 All of my life, I now think I underestimated racism.

Nobody chooses their ethnicity was what I thought as a child from the very first time I was ridiculed for being Indian. I did not yet know about Oklahoma as Indian Territory, about the bogus treaties that were forced upon the Five Tribes and then violated to make half a state from Indian Territory in 1907.

When I got old enough to understand the historical raw deal, the story of Oklahoma Territory — the other half of the state — seemed somehow more pure and honest. The tribes on the reservations in Oklahoma Territory were mostly Plains Indians brought there at gunpoint after hot wars. The reservations were gussied up POW camps. There is just something about the moral bankruptcy of entering treaties you have no plans to honor that stuck in my throat before I ever considered studying law.

I was a grown man, graduated from a first rate law school, when the perfect description of Indian Territory came from a dissenting opinion written by Justice Hugo Black. It lives to this day among Indian lawyers as “the all-purpose federal Indian law dissent.” Justice Black opined that,

Great nations, like great men, should keep their word.

Justice Black came from Alabama where, like many if not most politicians, he was a member of the Ku Klux Klan. I came to the law with Black and William O. Douglas representing the “absolutist” reading of the First Amendment, both in protecting free speech and in separating church and state. Black’s methods led him to the inescapable conclusion that the Reconstruction Amendments — 13th through 15th — had rendered the Constitution color blind.

Those same methods — to which I have never subscribed — led Black to dissent when Justice Douglas legalized birth control in 1965 based on a “right to privacy” that those of us who take honesty to be part of our jurisprudence will admit was born in 1890 from an article in Harvard Law Review. That does not offend me, but it offended Black.

Black claimed to have ditched the KKK in the mid-twenties; some researchers claimed he had a life membership. Whichever does not matter, because when he took the oath he became a judge, voting to strike down racially restrictive covenants and becoming part of the unanimous opinion in Brown v. Board of Education. He voted to enforce the Civil Rights Act of 1964 and to uphold the Voting Rights Act — except for the pre-clearance provision, which offended his idea of federalism.

The Constitution’s declaration in Article VI that treaties are “the supreme law of the land” has been made hash of in federal Indian law, but Black’s interpretive methods caused him to minimize his participation in the damage and led to his statement that enjoys a status among Indian lawyers it lacks in most of the Bar and Bench.

My childhood experiences with Indian alleged inferiority meant that I never bought into the alleged inferiority of people we then called Negroes (when being polite) and we now call African-Americans. People get to decide what to call themselves, but I always thought “black” kind of cuts to the chase even if it is a direct translation of “Negro.” Before I learned the history of discrimination in law and policy, it all seemed to me based on color.

I did not live through the times when the Irish or Eastern Europeans were on the bottom. My life experience of discrimination was Indians, African-Americans, Mexican-Americans, and Asian-Americans. I never had to think about which side I was on, having never swigged on the racist Kool-Aid in the first place.

I thought Bob Dylan nailed it in “Only a Pawn in Their Game,” that the poor and ignorant — particularly in the former Confederate states — just wanted to be better than somebody, and the swell folks had figured out how to take advantage of them.

The black vote did not matter because there was none.

I have since disabused myself of the fantasy that racism was just a lingering taint of the Confederate States of America. I also came to the same grudging respect for the overt racism of Jim Crow when compared to red-lining and employment discrimination that created an urban underclass defined by color in northern cities. It seemed to me very like the guns in Oklahoma Territory being more honest than the fake treaties in Indian Territory.

Still, the victories piled up in and out of court. The Holy Grail of formal equality before the law was reached and the cleanup from decades of discrimination was difficult but doable. Things were getting better.

here we are in the 21st century and a president of these United States appears to be betting his reelection on a reptilian visceral hatred based on color.

Donald John Trump’s long history of racism toward blacks has metastasized to the detriment of Latin Americans and the delight of the white supremacy organizers who have always lurked on the Internet sucking money from the stupid and the gullible.

Since the Voting Rights Act, there is a black vote. The Dixiecrats decamped for the Republican Party before the ink was dry on the Voting Rights Act — just as LBJ predicted when he signed it — and they still do not choose to compete for the black vote. The term “solid south” has switched meanings from nominal Democrats (since Reconstruction was a Republican enterprise) to a reliable Republican base for reverse-Robin Hood economics.

Another recent example, this time about brown people. George W. Bush might have been influenced by his brother Jeb falling in love with a Mexican girl, but whatever his reasons, he proved the GOP could make serious inroads without overt Hispandering.

On the negative side, Bush as governor of Texas stayed away from attempts to disenfranchise Spanish speaking people. Bush declined all offers to organize white people by stoking fear of Mexican immigrants. Around the same time, California Governor Pete Wilson was taking a more Trumpian view. Both Wilson and Bush left legacies for their respective state Republican parties, the beginning of Texas as a red state and the end of California as a purple state.

On the positive side, Bush appointed Hispanics to positions of authority in his administration. Those in the executive branch prospered, but when he used his appointment power to fill vacancies in elective offices, his appointees sometimes failed to clear the Republican primary and win their own terms.

While Bush did not bring home the entire Hispanic vote, he cut deeply into Democratic margins smack in the middle of what had been safe electoral territory. The man we now call Bush 43 took the beach — all his party had to do was move inland.

Which party opposed printing government messages in Spanish? Which party pushed voter ID laws with a disproportionate impact on Hispanics? Which party stood in the way of equalizing education expenditures as between Hispanic and Anglo districts?

If Jeb Bush had been elected, the electoral battlefield might have continued the tilt toward the GOP his brother started.

But the man elected POTUS came out of the chute calling Mexican immigrants rapists and went on to claim a brown judge could not give a fair trial to white people. The only Hispanic in the Trump cabinet was a Cuban-American who was chased out over cutting a sweetheart deal for a serial child molester when he served as U.S. Attorney in Florida.

You cannot explain the retreat from the Bush beachhead by any notion of electoral advantage. There are more Hispanics registered in each election and more of them are voting.

And the black vote? There are too many bad feelings to take it overnight, but cutting the Democratic margin is the name of the game….unless the real motivation is a hatred I never thought existed among the educated elite. I thought they were merely using black and brown people for political ends, but a rational politics pulls in the other direction.

Mr. Trump is betting on racism running broadly and deeply and invisible from polling because of the Bradley Effect. Of course, racism is only one of many reasons voters may be reluctant to admit to pollsters they intend to cast a ballot for Donald Trump. Recently, though, as Mr. Trump has conducted Twitter warfare against numerous nonwhite elected officials and the majority black city of Baltimore and the brown island of Puerto Rico, it appears the POTUS has traded racial dog whistles for a racial foghorn.

The overt turn to race hatred has become hard for the most determined Republican to ignore, but Republican elected officials remain silent. Being primaried by a Trump-endorsed candidate is perceived as the kiss of death.

On the other side of the road politically if not electorally, Joan Baez was part of the sound track of the civil rights movement. She had not written a song, she claims, in 25 years. She has now. It’s called “Nasty Man.”

I keep thinking — hoping — that if race hatred carried political currency in winning numbers there would be no Bradley Effect. If “white is right” is such a common opinion, why hide it? Because, Trump apologists will say, the intellectual snob elite has control over the universities and the lamestream media.

Still, Trump lost the popular vote in 2016 and that was when nobody took him seriously. How could a birther get elected to the county waste management board, let alone POTUS?

After four years of irresponsible foreign policy and federal agencies headed by persons who do not believe in the missions of the agencies they head, everybody takes him seriously. As Baez points out in her song, even the lamestream media have gutted up to call lies lies.

I am chastened. Fifty years after I thought the civil rights movement was over but for cleaning up after Jim Crow, we are poised to have a national referendum on race. For the first time in a long time, my tribal citizenship marks me as having a dog in the fight. If we lose, I am not in a position to “go back where I came from.”

END_OF_DOCUMENT_TOKEN_TO_BE_REPLACED

Facebook32Tweet3Pin1EmailShares36
wpDiscuz
Share this ArticleLike this article? Email it to a friend!
Email sent!