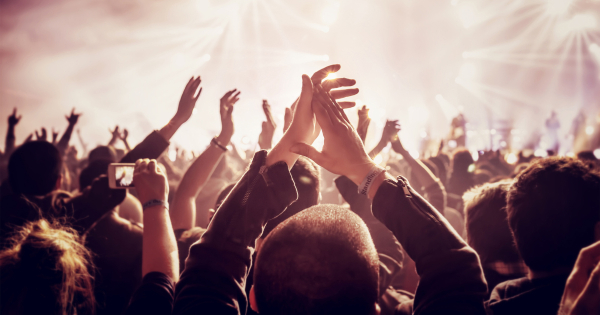 I’ve never been known for my spontaneity. I like routines, plans, my path marked out ahead of time. I feel that the true end of the stone age and the beginnings of civilization began when the Scots developed the first lunar calendar 10,000 years ago and started planning for future game migrations.

Whether out of necessity due to the kids or simply a matter of mellowing with age, I’ve become more flexible than I used to be. My wife was surprised but not completely shocked this past Saturday when I told her that our plans for the evening had changed. We were going to a rock show.

The show in question was The Carnival of Madness tour featuring Black Stone Cherry, Halestorm, and Shinedown. I’ve been a big fan of the southern hard rock of Black Stone Cherry for a while, but was hesitant about spending the money and finding a babysitter to see a short set by the opening act. Finding floor seats the day of the show for face value made the decision much easier and I’m glad that it did. Their forty minutes was worth the price of admission right out of the gate.

I was also very impressed by the headliners, Florida rockers Shinedown. They’ve recorded many songs that I’ve liked since 2004’s breakout cover of Lynyrd Skynyrd’s “Simple Man” but I’m not sure that I appreciated just how many. Frontman Brent Smith sounded fantastic and they put on an extremely entertaining show.

Unfortunately, I can’t say the same for the middle act, Halestorm. They get played a lot on several of my Pandora stations and songs such as “Bet You Wish You Had Me Back” and “Here’s To Us” seem to indicate that lead singer Lzzy Hale has a decent voice, but she inexplicably spent the entire performance screaming her lyrics. There seemed to be an effort to make their music “heavier” when played live that I didn’t find particularly effective.

Also hard to explain was my reaction to a fellow concertgoer. He was oblivious, across the room actually, but that neither excuses nor justifies.

The guy in question was about my age and had a little girl, I’m guessing just over four years in age, on his shoulders. She appeared to be having a blast, pumping her fists and generally rocking out to the music. Instead of celebrating this daddy/daughter moment I committed the most heinous crime that a parent can perpetrate against another. I judged.

I judged, thinking instead about the 120 decibel level she was being exposed to, the potentially irreversible damage being done to her still developing inner ear and how the least he could have done is moved further back from the speakers.

Communication with my wife was difficult, but upon pointing them out to her she replied that she “hoped the kid is wearing earplugs.”

I have no idea if the kid was wearing them or not, but it never even crossed my mind and I feel like I owe that dad an apology. I exhibited exactly the same behavior that I spend so much much time here railing against. My hypocrisy was inexcusable.

My daughter is getting old enough to start developing her own tastes and interests when it comes to pop culture. Many of the songs that she requests in the car now are rock music and when she makes up her own songs they often are sung in a voice closer to Metallica’s James Hetfield than to Taylor Swift. I don’t know when I will bring her to her first rock show but when I do, I hope she enjoys it as much as this little girl appeared to be. I’ll also be sure to make her wear earplugs.

Hopefully, there won’t be some jackass across the room judging me.