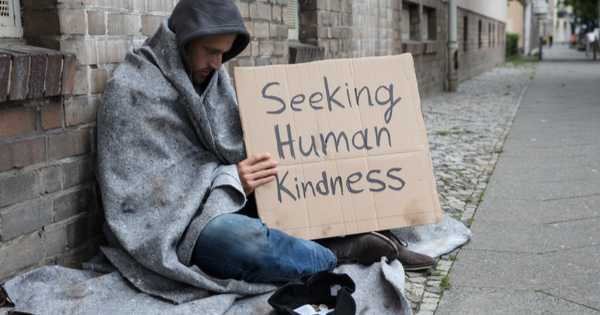 Every morning on my way to work, I see the same homeless person, pushing a shopping cart with all the possessions they own and hold dear to them. And, each time I picture myself. When I see a tent hidden behind a bush, or a tarp made into a tent tucked away, I can imagine myself hiding inside. The dirty clothes, the dirty faces, the shameful eyes looking down at their shoes with holes, it is all me. I feel all of it and I do not know why. For as long as I can remember, I have always felt as though I will be homeless at some point.

Maybe it’s because when I was 17, I left home one-night, dead set to get away from the toxicity of my father. It was probably the most unplanned, unprepared for and simultaneously the most unintelligent and wisest decision I ever made. Then there were no cell phones, I left without food, without setting up a place to stay and not a single person to call for help.

And even then, being alone, being unprepared, and without much of anything, I was better off on the street than at home. My memory from that time is shoddy at best which is a blessing in disguise I am sure. The memory that remains is that I found places to stay, I got a job, graduated high school and that although it was the loneliest I had ever been, I was not truly alone because it’s by the grace of God that I’ve never been homeless again.

Failure and struggle makes me curious, people with a past intrigue me immensely. When I see a homeless person I want to know their story. Much like a kindergartner at carpet time, I want to sit crisscross applesauce with my hands under my chin and take in their entire life story. Because I know it isn’t always alcohol, drugs, crime or mental illness that cost them a warm place to sleep, a warm meal, or a sense of peace within their mind or within four walls.

It wasn’t any of those that cost me my own home, my own family or my safety. A few years back I wanted to collect and take blankets to the homeless because when they were cold, I felt cold. When they were wet, I felt wet. But no one understood that or would help me with the project because it was dangerous for a woman to do alone. And, knowing that kept me from doing it, but that feeling of wanting them to be seen, feel heard and know there was zero judgment has never left my heart.

Once when I was pregnant with Gracie, a man who appeared homeless, was stuck in the middle of a crosswalk in his wheelchair. One of his wheels was caught in a small pothole and he only had one leg to propel him forward. My father was a double amputee, and my heart went out to this man. There was no one else around, so I put my car in park, got out and walked over to him and offered to push him the rest of the way.

He told me to get away from him, he told me he did not need nor want my help. And, with all he had, he made it across all by himself. Sitting in my car I cried, in part I am sure because I was pregnant, in part because he reminded me of my father, and I remember sitting there thinking he was such a jerk!

But, he was not the jerk, I was. I assumed he needed assistance, I assumed he couldn’t do it because of how I would have felt if I were in the same situation. And, I was wrong.

Maybe homeless is better than home for some of them. Maybe homeless is safer. Maybe they lost their home when they lost the people inside those four walls that made it a home in the first place. Maybe they couldn’t bring themselves to walk back through a door that their child would never run to again. Or a wife that would never be there to greet him at. Maybe it was too hard, too much and they gave up. I can understand that, I could see that, I can feel that.

Homeless doesn’t mean worthless, it doesn’t mean hopeless and it surely does not mean unlovable. Maybe for them it just means wild, liberated, free and possibly daring for some. I’ve heard so many times that a homeless person may have a home and a family but that they choose to roam instead. I can’t imagine what that would feel like to have a family member choose to be homeless, dirty, hungry, unsafe and alone.

I’m not blind to the fact that a majority of homeless people are lacking the mental health and medical care they need and that those situations alone are the leading factor to becoming a sole tenant in a tent, a tarp and a shopping cart. That many are not in their “right mind”, and that yes, some are even dangerous. My thoughts are just that we have no idea what made them walk out that door, or that there was ever a door to begin with for them. Yet, people treat homeless people like garbage solely because sometimes they smell bad, look bad or act poorly. And, that breaks my heart.

The way I see it is we are all one paycheck away from homeless, one lost job from a tent, one mental breakdown from a tarp and one life shattering moment from a cart holding all that is left. The only difference is how we are able to handle those situations with the resources we’re given. And, that should be enough to change judgment into compassion, because one day that could be me, you or someone you love.

Jessica Griffiths is a small town wife and momma to three busy teenagers (yes, three!) in Eagle Point, Oregon. In 2012, she became a stepmom and realized quickly the stigma that followed and the unfair rap stepparents were given
and created the blog Totally Jessifiable - justifying love regardless of biology. The faith based blog has since transformed into a blog for the every day woman who is tired of trying to be an insider when she has the heart of an outsider. It boasts an unapologetic confidence focusing on ditching the shame of your past, taking back ownership of your life and realizing that what God restores, no man can destroy. While sharing her own personal failures and hardships she hopes that offering support, motivation and love along the way - will make you see you're not all that bad after all. The truth only hurts if it remains hidden - and she is an open book! 2 Corinthians 11:30

END_OF_DOCUMENT_TOKEN_TO_BE_REPLACED

Facebook48Tweet2PinEmailShares50
wpDiscuz
Share this ArticleLike this article? Email it to a friend!
Email sent!