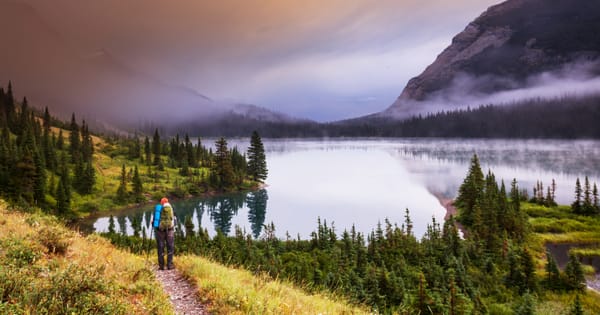 Vacations are sacred. Today’s version of a spiritual journey. A chance to get away from all the electronic interference, the constant, instant demands of our wireless society, an opportunity to toss it all aside, connect with the spiritual world that hides from the electromagnetic cocoon we have invented. Then we can share it on Facebook. The best of both worlds

I like to look for local legends, ghost towns, anything that could provide an interesting twist to the story. Every vacation has a story, a theme song, an overriding arc on which I can manufacture an odd, aggregated occultism. This time the location was so remote I couldn’t really find anything. But, if there was ever a place that had ghosts, deserved spirits of some type, demanded something otherworldly and extra-natural it is those mountains. The power and majesty of the Rockies, the sweeping, surrounding vista of towering peaks and steep valleys, brother there has to be something in there somewhere.

The “Rockies form the cordilleran backbone of the great upland system that dominates the western North American continent.” Starting in British Columbia they march a jagged line all the way to New Mexico. In places they are three hundred miles wide and reach twelve thousand feet high. Nature at its most impressive.

We stayed in Dickinson, ND, the last night on the road. Since we were in a hurry the next morning we skipped the free breakfast at the motel and headed over to Taco John’s. A beloved place from our past.

As we carried our breakfast to our pick up an old guy, tall, thin and slightly bent, long, gray ponytail, long gray beard that seemed both neat and unkempt, low heel cowboy boots, and a brown, leather cowboy hat, stopped, looked us over and asked, “Ohio, huh?” He smiled and took off his hat.

“Yes, we’re going to Montana. We’re staying in a decommissioned fire lookout on top of a mountain by Glacier National Park.” I told him. It might have been more information than the conversation required. But, it was an open-ended question with an infinite variety of possible answers. I was excited about the rapidly approaching destination and I was on my third cup of coffee with no food to soak up all the enthusiasm. Plus, sometimes I get a little wordy.

“You cats are crazy.” He said with a smile, a knowing, gentle smile. “Good luck.” He put his hat back on, tossed a casual peace sign our way, and turned and shuffled slowly into the restaurant. I was pretty sure it was a sign. A good sign, I hoped.

That first night, after hiking up the side of that mountain, we closed the shutters and fell onto our cots, exhausted from the day, mellow with the wine and the cheese and crackers. Sleep came quickly. Until the wind picked up.

The shutters banged and hammered against the building, bending to the will of the wind. Between gusts, I could hear the scurrying of animals and hoped they were outside.

Then came the voices.

All the voices. Wisps of conversation, quiet, solemn, urgent, everywhere. Voices from the Native Americans who found the mountains sacred, who worshipped the trees, the animals, who made peace with nature. The voices of the early settlers who filled the valleys and wooded mountainsides with their own holy ghosts and demons carried in trunks across the ocean from Europe.

I didn’t understand the words but I understood the emotions, the need, the overpowering appeal of the place. It was primitive and refined, beautiful and terrible. The voices were perfect, sounds that were outside language, sounds of pure thought, sounds that didn’t need to be translated. Just understood.

We slept as much as we could, the cold, the wind, and the voices. All night long they were out there, walking past, but we were never afraid. They weren’t really there. The voices were just the wind whistling through the bear grass, through the trees. Nobody was out there, not really.

In the morning, I went out to opened the shutters and was amazed because there were no footprints in the dirt around the cabin. Maybe they hadn’t been out there.

“Did you hear voices?” I asked my wife while I was waiting for my water to warm up for a cup of coffee.

“Yes, I did, last night.” She said, looking away. Maybe she didn’t want to admit she had heard voices, maybe she thought it was a dream or her imagination. Sometimes she is too practical and doesn’t like to admit to things that hang around on the fringes of impractical. I didn’t push it.

We went out and sat on the rocks, Diet Coke, coffee and a couple of pieces of leftover baguette. We stared for a long time into the unbelievable distances, the savage beauty, the incredible heights, the amazing, mystifying creation. We sat staring at the Rocky Mountains. It took our breath away.

Maybe that explained the voices. Maybe it took more than your breath, maybe just by being there and loving the place you left part of you behind. And you had to love the place, there was no option not to, given how far you had to go and how hard you had to work to get there.

Somehow, thinking I might be part of the crowd, one of the voices on that lonely, lovely mountain top brings me a little comfort. So, if you are ever in Hornet Lookout in the middle of the night and the wind dies down you might hear my voice. But, maybe I have had too much coffee.

Facebook39Tweet4Pin2EmailShares45
wpDiscuz
0
0
Would love your thoughts, please comment.x
()
x
| Reply
Share this ArticleLike this article? Email it to a friend!
Email sent!