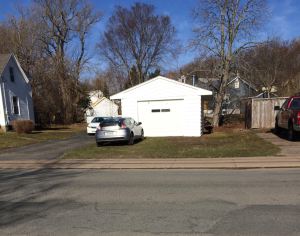 —
This old garage. There was always some great music coming through this workshop. I walked by it often since I lived a few blocks away up the street from this place. Through a mutual friend, I met the owner of the place and his amazing family one evening. Jon Mac was an employee at the local tire production plant for many long years. In his spare time, he tweaked around with old guitars and spent endless hours jamming in the garage. It was in this garage that I obtained my first real experience playing upright. Jon borrowed the upright bass from the nearby elementary school so he could use it to record a few demo tracks. He borrowed a friend’s 4-track tape recorder so he could lay down a handful of favorite songs and play all of the instruments on each piece.

Much of the music Jon played and enjoyed was early rock and roll, along with classic country. He started to organize regular jam sessions for all the neighborhood musicians. I was the youngest to always drop by. I would play bass for hours on end along with anyone else who could fit into the garage. It was a real thrill for me to pick up an upright and play with absolute ease. For years I was playing bass guitar and reading up on upright technique. Occasionally I would manage to find a music store that would have one so there were opportunities to try my hand at it. When Jon Mac borrowed this upright it was a transporting experience.

One night a jam session involved two bass players, Jon Mac on guitar, a husband and wife singing duo who also could play guitar, and a farmer who played pedal steel. I did not really know what we would be playing that night. I relied heavily on my ear and ability to just follow things along in whatever key we were in. I remember going through a relatively standard set of songs and being really happy that I could blow through them. Playing upright bass is physically demanding and I was pouring my heart into playing. I dug in really well and made the thing sing. Jon put a microphone set up perfectly in front of the bass so it bounced off the walls without drowning anyone out. There was no one there playing drums so it fell to me to bring out a percussive sound. Whatever I was doing worked. Whatever everyone was doing worked.

We all sounded amazing.

They started into an instrumental where everyone would have a turn soloing. Blindly, my assumption would be to carry everyone through. After people took turns playing these incredible solos, there was a build-up of chord combinations and heavy strumming. Somewhere a few bars along everyone stopped and looked right at me to fill in the space with a bass fill. It was one of those moments I never can forget. I managed enough notes to close the gaps and bring everything to a close in the session. It was a short few bars of my first real bass solo. It worked. To this day a solo may never have sounded that good.

Jon Mac passed away not long after I left Nova Scotia. Years of heavy smoking caught up with him quickly. I never forgot the generosity of him and his musical family. He made the hometown great and no doubt was helpful being one of the many people who kept me out of trouble.